When we go tent camping, we have to account for the elements of home that we lose. We need sleeping bags to compensate for being out in the cool air, especially in the fall and spring. We need either nonperishable food or ice and a cooler to keep food cold so it doesn’t spoil. We need the means to cook and clean and use the facilities.

In the midst of all of that, one of the more underrated needs is light. Even in a well-maintained state park, things get pretty dark at night. If you’re out in the wilderness, it’s darker than that. There are real hazards associated with finding your way to use the restroom at 3 a.m. if you don’t have a working flashlight to keep you from tripping over a tree root or rock. Trust me, I know.

We keep a collection of flashlights and lanterns specifically for camping. Many of them come from Aldi, thanks in part to the fact that the grocer tends to rotate a collection of outdoor and camping-specific items on to its shelves in the summer. This summer, I spotted something I hadn’t seen in the supermarket before: a dedicated camping light.

I decided to try it out. 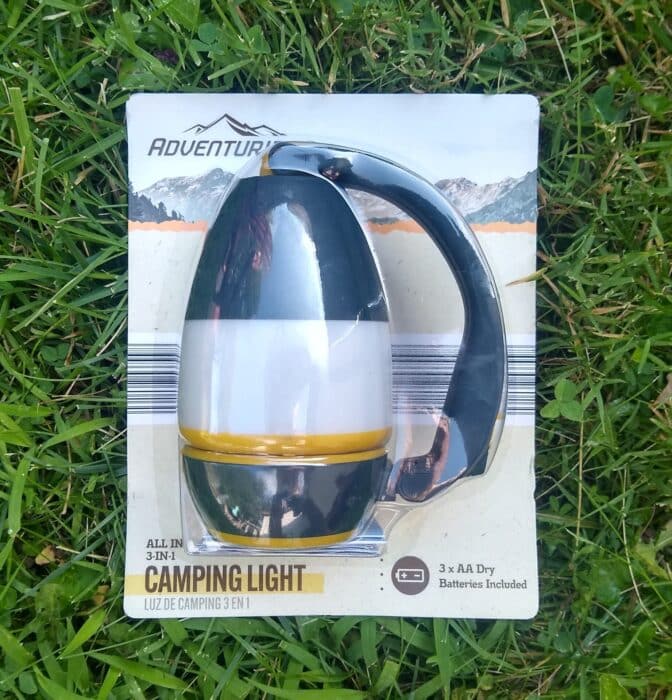 The Adventuridge Camping Light is an Aldi Find. That means you can only find it in stores for a limited time. Once it’s sold out, you won’t be able to find it again in stores until it comes back, which could be next year or not at all. Aldi doesn’t ship products online, so if you can’t find it in your stores, you’re out of luck.

According to Aldi, here’s more information about the light:

At the time of this post, the light cost $8.99. I found the same style of light on Amazon here and here for more money, but those models either have rechargeable batteries and / or more lumens, so there are some tradeoffs there. 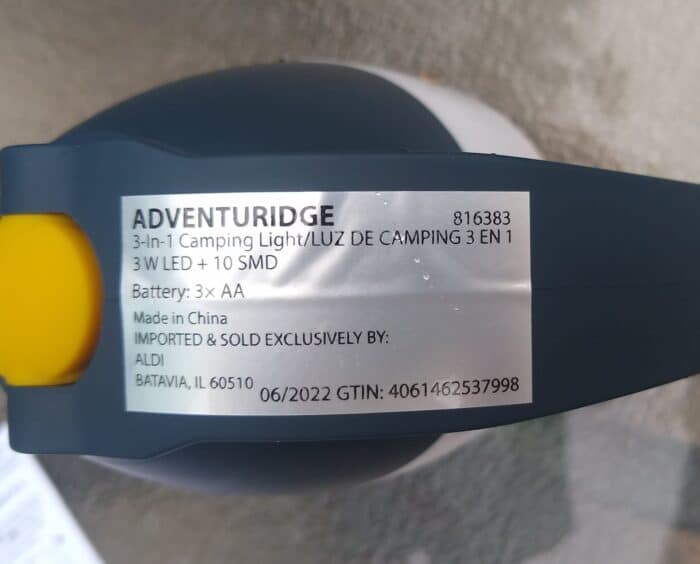 The light doesn’t make it clear who manufactures it, other than saying it was made in China. It doesn’t come with a warranty or any kind of after-sales support. 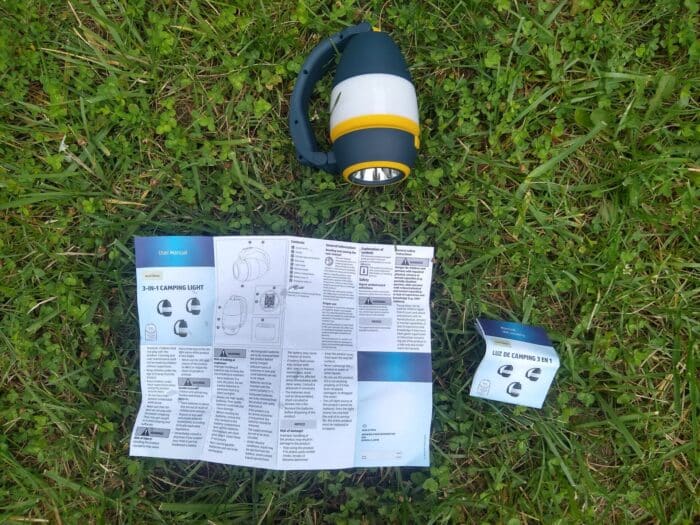 The Aldi version of this light does require three AA batteries, but those batteries are also included. In my light, they were pre-installed; before using the light, I needed to open up the main body and remove a plastic tab blocking one of the batteries from the connector. To open the main body, you first release the LED light from the main body. Then you rotate the white light shade counterclockwise until it clicks up and detaches.

Once you’ve removed the plastic tab (or, once your batteries are dead, and you’ve changed the batteries), you can put the body back on. Putting the body back on requires lining up an arrow on the body with one on the light shade — if the two pieces don’t fit together fully, I found I had to separate them, line them up again, and retry. Once they’re flush with each other, you simply rotate clockwise again.

The camping light has three settings. Two of those settings operate the 10 smaller SMD bulbs, while the other operates the larger LED bulb on the opposite side of the LED section of the light. When attached, the 10 SMD bulbs glow through the main body’s light shade to create a lantern effect, and when detached, the bulbs create a kind of desk lamp. The larger LED bulb functions like a traditional flashlight. A single switch at the top has four settings for off, SMD low, SMD high, and LED on.

It’s easy enough to use. It’s not hard to configure it into the different settings, and it feels substantial without being too heavy. It balances mostly well when in the lamp position, and it feels about right in the flashlight position. I like the idea that I could set this out on a table at a park in the lantern position, then pick it up and switch to flashlight if I needed to go somewhere. The flexibility is a plus.

In terms of light, it’s passable. I’ve got lanterns and flashlights that are brighter, but this one puts out enough illumination to put a little ambient light on a table or light the way along a dark path. The desk lamp mode is bright enough to read by.

I don’t know how this thing will hold up with time. It doesn’t make any kind of water resistance claims that I can see, so I couldn’t tell you how it will fare with a rainstorm or other camping-related challenges. Because it doesn’t have a warranty, once it stops working that’s it. For $9, that might not matter too much. Nevertheless, I’ll be taking this with me on camping expeditions and I’ll report back on how it does over time.

The Adventuridge 3-In-1 Camping Light offers some options for camping illumination at a budget price. It’s not an overpowering light on any front, but it is adequate for times when you’re in the dark, including if you need a lamp to read by. There’s no warranty, though, and we’re not yet sure how long it will last.