Several of my friends eat gluten free diets, so I’m accustomed to providing options for them when they visit. They speak positively about many of the gluten free foods at Aldi, including the bread, General Tso’s chicken, chicken bites, pancake and baking mix, cornbread mix, cheese biscuit mix, and macaroni and cheese. Occasionally, Aldi rotates limited-time specials into its gluten free mix, including stuffing and specialty donuts during the winter holidays. Also, Aldi sometimes sells traditional glazed or chocolate donuts in gluten free form. I recently bought some of the glazed and chocolate donuts to try. 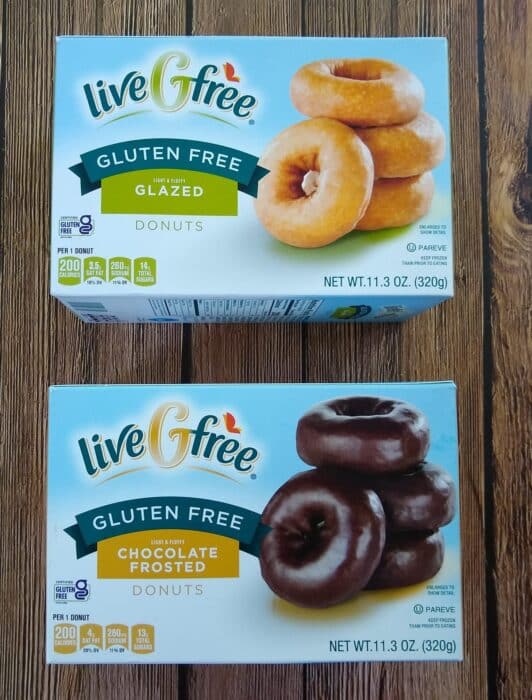 liveGfree Donuts cost $4.99 for an 11.3-ounce box containing six donuts at the time of publication. That comes out to about 83 cents per donut. They were sold in Glazed or Chocolate Frosted varieties. They’re kosher and certified gluten free.

These are Aldi Finds, so they’re only in stores for a short time. Each store gets just one shipment, and after that sells out, these are gone until Aldi decides to bring them back, whenever that might be. Aldi does not offer online ordering for products that aren’t available in your local store. Fortunately, because these are sold frozen, you can stock up on them when Aldi happens to sell them. 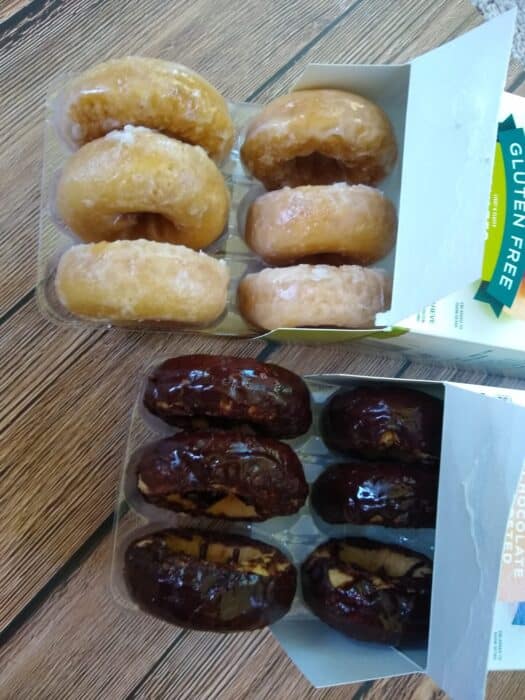 The package states in small print to keep these donuts frozen and to thaw prior to eating. I thawed these for half a day in my refrigerator, and because I knew they wouldn’t last more than about two days with my family, I kept them in the fridge. The chocolate donuts are especially good when kept refrigerated because it keeps the chocolate coating more crisp. I initially tried to thaw one of the glazed donuts a little faster by heating it for about 10 seconds in the microwave, but that made the glaze softer and squishier than I preferred, so I recommend thawing these in the refrigerator and not trying to speed up the process in the microwave.

These are made with a gluten free flour blend that contains corn starch, tapioca starch, and white rice flour. If you’re looking out for allergens, these contain egg. 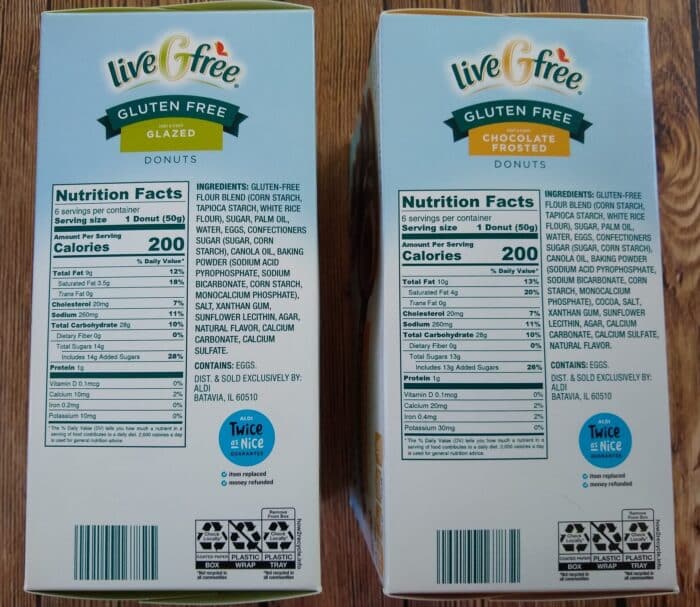 Keep reading for more information on each donut flavor.

This is the closest thing to a Krispy Kreme glazed donut if you’re on a gluten free diet. It’s not exactly the same (nothing is, really), but this is a good donut. It’s soft on the inside with a thick, sweet coating of icing on the outside.

liveGfree Donuts come in Glazed or Chocolate Frosted flavors. They’re as good as traditional store-bought donuts and quickly disappeared from our house. If you’re on a gluten free diet or are looking for gluten free alternatives for friends or family, these are worth getting.