Gnomes are mythical creatures that trace their origins back at least hundreds of years ago to Europe. They were an important part of the myths and legends of the time, first through word of mouth and later through written storytelling. In recent decades, they’ve taken on a place in the fantasy genre, whether it’s paper and pencil role playing games, fantasy novels, television series, or film.

For reasons I can’t quite understand, gnomes are also now a popular decoration. We see them in fairy gardens. They’ve also become a big thing in the world of Christmas décor, joining Elf on the Shelf as a December staple. Aldi jumped on the gnome trend with a My Friend Gnome Kit. It later sold an oversized gnome under the Merry Moments house brand.

Now Aldi is bringing another wave of gnomes to its lineup. 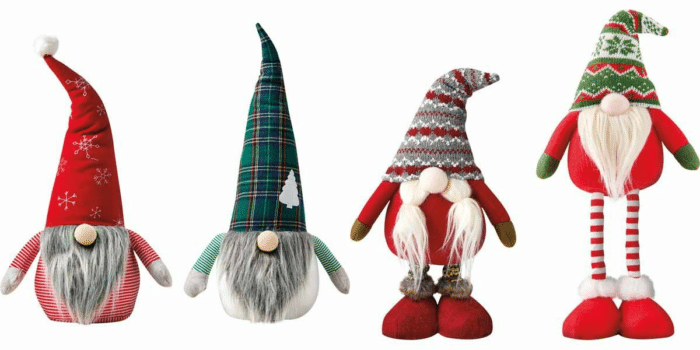 Both holiday gnomes are currently $8.99. Aldi sold the holiday gnome in 2020 for the same price. Most gnomes right now go for more than that, so this looks to be a solid price if you’re in the market for one.

The Holiday Gnomes are 20 inches high and come in Gray Snowflake, Gray Candy Cane, Red/Green Plaid, Red Snowflake, Red Plaid or Green Plaid. The Extendable Gnomes stand up to 17.9 inches high, can be extended or retracted, and come in assorted varieties. Neither of them appears to come with a warranty, although I wouldn’t necessarily expect one in this case.

We haven’t tested either of these gnomes, so we don’t know how easily they set up or how long they last, especially if you decide to place them outdoors. Our goal with open thread posts such as this one is to offer a space for readers to share about their experiences with a product.

Do you have experience with the holiday gnome or extendable gnome? Let us know in the comments.