Pulled pork is one of my favorite meals. I often purchase a pork butt roast at Aldi, place it in my slow cooker, and let it cook all day so that in the evening my family can enjoy barbecued pulled pork sandwiches or pulled pork nachos. For something a little different, I recently purchased a pre-seasoned BBQ-flavored boneless pork shoulder roast from Aldi. 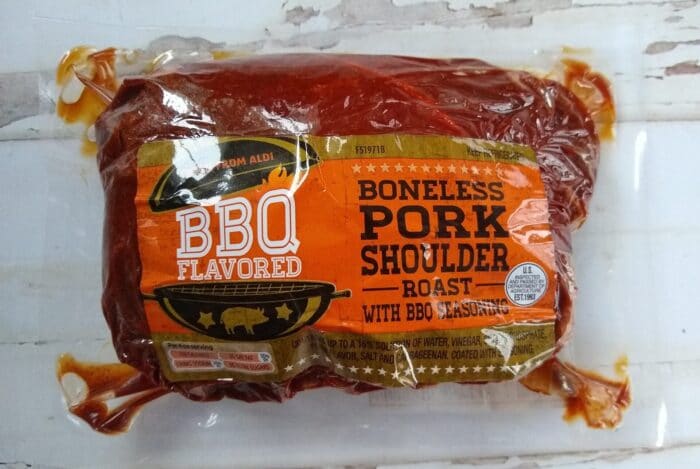 The Aldi BBQ Flavored Boneless Pork Shoulder Roast with BBQ Seasoning cost $2.39 per pound at the time of publication. I bought a 1.615-pound roast for $3.86.

This is a Regular Buy or core range product, which means you should be able to buy it at Aldi any time of year. 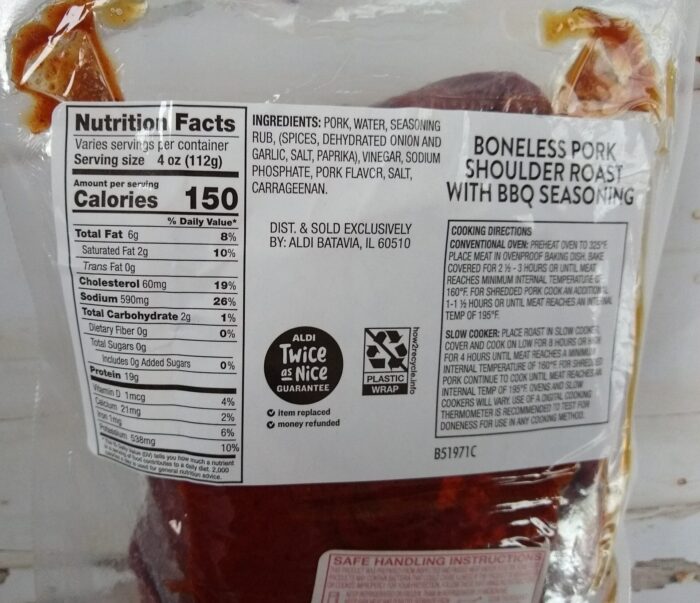 The pork roast I purchased on January 4th of 2022 states on the package that it should be used or frozen by January 20th, 2022, so this should last for a couple of weeks in your fridge if you don’t plan to cook it right away.

The package has directions for cooking the roast in a conventional oven or in a slow cooker.

I cooked this for 8 hours in my small slow cooker (which generally takes longer to cook things) with the cooker on the low setting for the first seven hours, and during the final cooking hour I bumped it up to the high setting to tenderize the meat a little more. Ultimately, it was fork tender and fell apart with little effort. 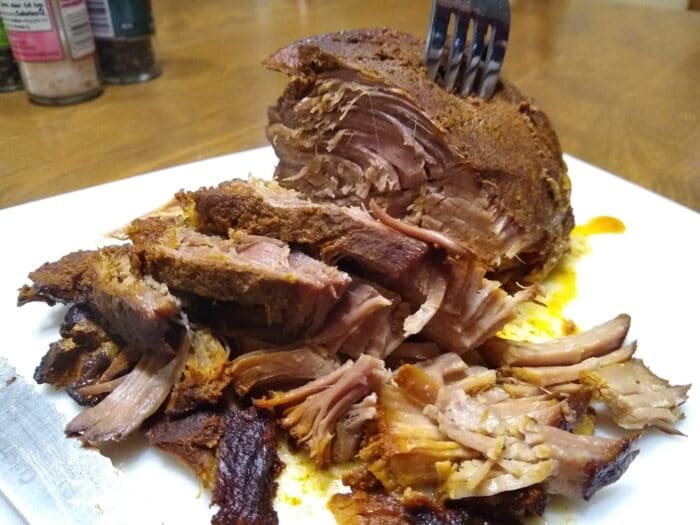 The roast after eight hours in the slow cooker.

This was an excellent roast. It had good flavor, and my husband and I thought it rivaled some seasoned pulled pork we’ve gotten from local barbecue restaurants. My family did opt to add some barbecue sauce because — while this meat is seasoned nicely — there really isn’t any sauce with the meat itself. We liked this pork shoulder roast with Burman’s Kansas City BBQ sauce from Aldi, although it would go well with a variety of different barbecue sauces.

We ate this as a low-carb meal and did not serve it on sandwich buns or nachos, instead opting to eat it alongside some steamed mixed veggies and some sautéed balsamic bacon glazed brussels sprouts from Aldi. However, this meat would be fantastic atop brioche buns or hamburger buns, on nachos, in wraps, or on a loaded baked potato. The fact that it can be a set-it-and-forget-it slow cooker meal is the icing on the cake. It’s the ultimate easy dinner on a busy weeknight.

One final thing to be aware of is that this is a small roast, but the low price means you could easily buy more than one to feed a crowd. One roast was plenty for our family of four.

The Aldi BBQ Flavored Boneless Pork Shoulder Roast with BBQ Seasoning was better than we expected. It can prepared in the oven or in a slow cooker. We highly recommend the slow cooker route for a convenient dinner. This roast was tender and easily pulled apart after eight hours in the slow cooker, and it’s ideal for eating on its own (with a good barbecue sauce if desired) or for serving with sandwiches, wraps, loaded potatoes, or nachos.