Skip to content
Home Features How Does Kroger’s Ruler Foods Compare to Aldi?

How Does Kroger’s Ruler Foods Compare to Aldi?

If you live in the United States, there’s a good chance you know the name Kroger. Originally founded by Bernard Kroger in Cincinnati in 1883, the company today generates well over $100 billion a year in revenue, with locations in 35 states plus the District of Columbia. Kroger is the 17th largest company in the United States, the largest supermarket chain, and the second-largest general retailer, trailing only Walmart.

What the average shopper may not realize, though, is just how many supermarkets, pharmacies, and big box stores Kroger owns that don’t bear the name Kroger. If you happen to live in an area with a Fred Meyer, a Fry’s, a Smith’s, or a Harris Teeter, you know of one of Kroger’s many subsidiaries. Most of these are acquisitions: in other words, Kroger has bought out these companies over the years, adding to its massive portfolio.

Among its holdings, Kroger has purchased two low-inventory no-frills grocery chains. One is a store called Food 4 Less, which Kroger acquired in 1998 and which operates in California, Indiana, Illinois, and Ohio. The other is Ruler Foods, which Kroger purchased in 1999 and which operates in Illinois, Indiana, Ohio, Kentucky, Missouri, and Tennessee. (In parts of the Chicagoland area, it’s not uncommon to see Kroger stores, Food 4 Less Stores, and Ruler Food stores within local driving distance from one another.)

What is Ruler Foods? 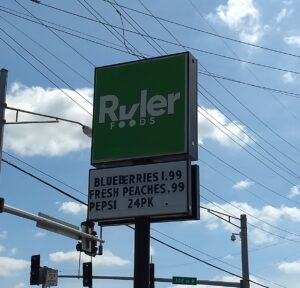 In 1863, a Swiss immigrant named John C. Groub, along with his wife, Elizabeth, opened a grocery store in Seymour, Indiana. Over the course of time, the company grew, establishing both larger supermarkets under the name JayC and a few smaller discount grocers named Ruler Foods. JayC was purchased by Kroger in the same 1999 deal that involved Ruler Foods, and Kroger subsequently decided to change the direction of Ruler Foods. Instead of just marketing it as a discount store, Kroger aimed to place Ruler Foods in areas where there wasn’t a Kroger. Today, there are around 50 Ruler Foods stores in the Midwest.

One of those areas is St. Louis, Missouri. St. Louis has an interesting situation in that its local grocery landscape is dominated by regional chains Schnucks and Dierbergs. (Walmart also has a significant presence in the area, as does Aldi.) The nearest Kroger to downtown St. Louis is about an hour away. That lack of a Kroger in the immediate St. Louis area is why the company has opened nine different Ruler Foods in and around St. Louis.

We recently paid a visit to one of those St. Louis area Ruler Foods stores.

If you’ve ever been to Aldi before, it’s pretty much impossible not to see the resemblance when you visit Ruler Foods. This is not an accident — in fact, Kroger has even brought on Aldi veterans to help shape Ruler Foods in the image of Aldi. Like Aldi, Ruler Foods is what is known in the grocery business as a “hard discounter,” or a grocery chain — like Aldi or Lidl — that aims to keep prices low through a no-frills experience.

We saw this from the moment we parked. The store is similar in size to Aldi (the average Aldi is about 17,000 square feet; Ruler Foods averages about 19,000 square feet) and the parking lot is about the same. Out on the parking lot, we spotted grocery carts linked together that required a quarter to unlock. That’s right — Kroger’s Ruler Foods uses the quarter system. Unlike Aldi, however, the carts were in covered cart corrals out in the parking lot, as opposed to immediately outside or inside the store. 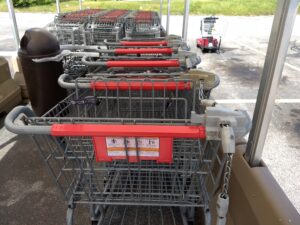 Inside, we saw a store that was like Aldi in many ways. It’s definitely a compact experience, with just a few aisles. It’s also a store that, for the most part, has limited options for any given product. In other words, you don’t have seven kinds of ketchup to choose from like you might at Kroger. 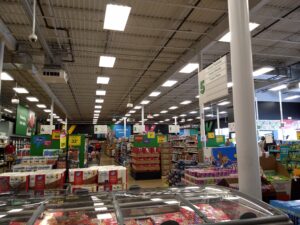 Also like Aldi, Ruler Foods is mostly about private label brands rather than name brands. In the case of Ruler Foods, this means a lot of Kroger private labels, from milk to chips. Even the diapers were the Kroger Comforts line. 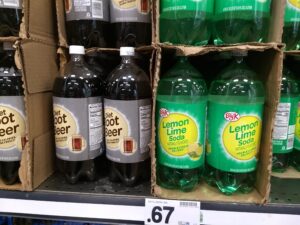 Not everything was Kroger brand, though. About 80% of Ruler Foods is private label, about 20% is not. We saw a noticeable minority of name brands like Miracle Whip, Coca-Cola, and Pringles. Aldi, meanwhile, is about 90% private label. That doesn’t seem like a big difference, but we could definitely see it — Ruler Foods clearly stocks more name brand food.

The Ruler Foods selection was generally good, although I found a few odd omissions. One of them: my personal favorite, dry roasted salted peanuts, was nowhere to be found in the Ruler Foods we visited.

Other sections of note at Ruler Foods included a small organic section and a slightly larger wine section. Neither of them, to us, appeared to be as big as Aldi’s respective sections, and neither was nearly as large as we see at, say, Trader Joe’s. 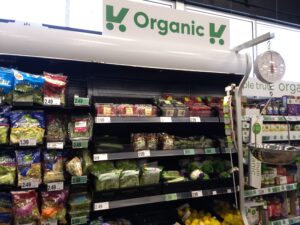 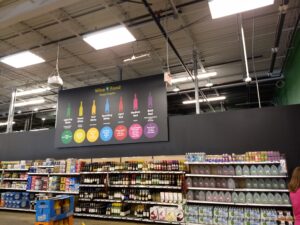 Ruler Foods wine. Notice the half-wall — we assume the area behind it is a stock room or other employee space. (Click to enlarge.)

What about price? We’d been told Ruler Foods was a hard discounter, and it showed. Prices in the store were very competitive to Aldi, especially among the staple products. The eggs, for example, at Ruler Foods were as cheap as we’ve seen at Aldi, and they may currently be even a little cheaper. 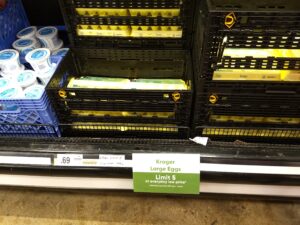 There were a few differences between Aldi and Ruler Foods that we noticed. One was that Ruler Foods has only a very small seasonal section. Where Aldi really lives and breathes its rotating ALDI Find (Special Buy) lineup, everything in Ruler Foods that might qualify as a seasonal item or limited buy fit along one small part of one row and a couple of scattered places in the front and back. Ruler Foods is mostly about food, and what few non-food items it has are mostly essentials like paper products or toiletries. 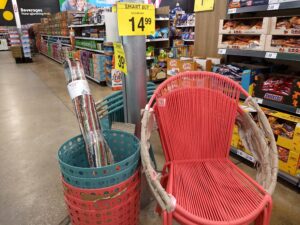 This is the most exciting limited buy I saw. (Click to enlarge.)

A second difference: Ruler Foods stocked both some makeup as well as cigarettes, both of them near the checkout aisle. We’ve never seen Aldi sell makeup other than lip balm, and Aldi refuses to sell tobacco, a decision that is the reason Aldi split up as a company back in the 1960s.

A third difference: the checkout lines. Aldi is pretty fast, while Ruler Foods is … well, like most other stores. It was on the slower side. However, Ruler Foods is like Aldi in that you have to bag your own groceries, and you have to pay for bags if you need them. (Unlike Aldi, we didn’t see any cardboard boxes lying around inside Ruler Foods.)

One final note, regarding coupons and rewards. Aldi, famously, doesn’t have a rewards system and almost never does coupons. Ruler Foods, as a subsidiary of Kroger, does take the Kroger Plus Shopper’s Card if you happen to have one. On the other hand, Ruler Foods by and large does not take coupons, even Kroger branded ones.

As we walked out of Ruler Foods, we were definitely struck by both the store’s eerie familiarity but also its distinctives. Kroger is shamelessly channeling its inner Aldi with the store, but it is also doing just a few things differently, too, especially with regard to favoring a few more national brands and less in the area of limited buy items. That makes Ruler Foods maybe a little bit less exciting than Aldi — or Trader Joe’s, for that matter — but it definitely competes on price. It will be interesting to see how much Kroger expands the Ruler Foods brand down the line.

Ruler Foods didn’t impress us enough to sell us on becoming repeat customers, but it did illustrate another example of just how heated the grocery wars are right now, especially when it comes to hard discounters.