Skip to content
Home Features Aldi is Expanding Rapidly. Can Suppliers Keep Up?

Aldi is Expanding Rapidly. Can Suppliers Keep Up? 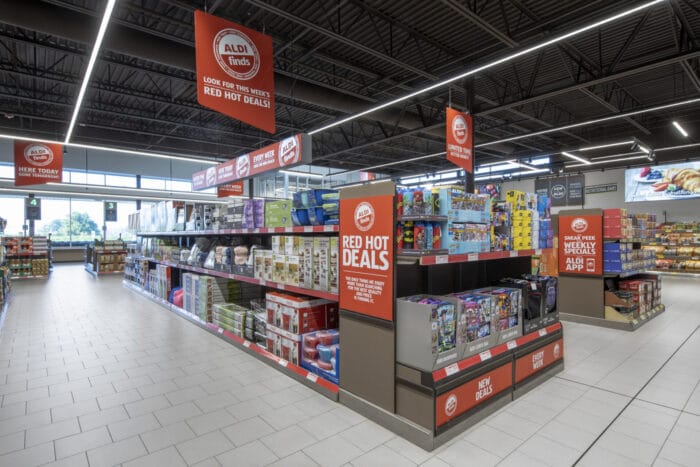 Aldi, like every retailer, lives and dies by its ability to get its products into stores where customers can buy them. After all, customers can’t buy what they don’t see. Being unable to meet customer demand with product supply is every retailer’s worst nightmare.

In the best of times, the logistics of stocking a large chain of stores is daunting. Aldi, like many retailers right now, is not in the best of times. Despite being a profitable and powerful company (or, rather, two companies), a combination of aggressive business strategy and current global challenges have conspired to create serious hurdles to the German supermarket’s ability to put products on its shelves.

In this space, we’ll take a look at what those challenges are — both those created by Aldi and those outside of the grocer’s control — and how Aldi is responding and will respond to those challenges.

A Lesson From History

Aldi is by no means the first company to struggle with supply.

In the mid-19th century, Cornelius Vanderbilt was one of the wealthiest men in America. Vanderbilt had made his fortune in steamboat shipping, but, seeing a better opportunity, he had moved to railroads. His instincts proved right, and by the 1860s Vanderbilt was a titan of the American railroad system. He wanted more, and when the Civil War ended in 1865, Vanderbilt — who was now in his 70s — began looking for a way to expand his railroad business.

Vanderbilt began looking at transporting oil. Oil was in growing demand because it could be refined into kerosene, one of the safest and most reliable sources of light at the time. He found a potential mark in a young up-and-coming oil man from Cleveland named John D. Rockefeller. Rockefeller’s business was struggling, and Vanderbilt felt he could swing a favorable transport deal from him.

Vanderbilt invited Rockefeller to visit him in New York. (They were initially supposed to meet in December of 1867, but Rockefeller missed his train … a mistake that likely saved his life, because the train derailed, killing nearly 50 people.) When the two eventually met, Rockefeller argued for a lower shipping rate than Vanderbilt wanted but promised to supply Vanderbilt with 60 train cars of oil every day. The problem? At the time, Rockefeller could only produce only half that amount.

Rockefeller found a way to increase his capacity and meet the contract. In fact, Rockefeller eventually would produce more than even Vanderbilt could ship. Rockefeller, looking for his own edge, would go so far as to build his own oil pipelines, bypassing the railroads entirely and eventually making Standard Oil into an oil monopoly. Rockefeller’s peak net worth, in today’s money, was over $300 billion dollars, making him the richest American who ever lived.

There is a simple lesson in this tale. Every company dreams of having products in high demand. The sleepless nights come from trying to meet that demand, especially if there are competitors who can. Rockefeller represents what can happen when you give your customers all the product they want or need. History is littered with failures of those who couldn’t, including the many oil companies Rockefeller — nicknamed “Reckafellow” by fellow industrialist Andrew Carnegie — wiped out along the way.

Aldi is in the midst of an aggressive growth operation in the United States. In 2017, the German supermarket announced a $3.4 billion plan to build 800 stores in five years, bringing its total from 1,700 stores to 2,500. That followed close on the heels of a $1.6 billion project to remodel and refresh existing stores. By 2022, Aldi is aiming to be the third-largest grocer in America, trailing only Walmart and Kroger. Some of those stores are near places Aldi already has a presence, while others are in entirely new states.

Few companies outside of Amazon are so ambitious. But Aldi is. The limited assortment store, with its small inventory and private labels, stands out as a low-cost option in the cutthroat grocery wars. Aldi wants its stores to be anywhere it can be profitable, selling goods at prices that other stores can’t match.

It’s no secret that, at the time of this post, the world is locked in a supply chain mess. Thanks to a combination of colliding factors, stores are having a hard time getting their goods delivered from manufacturers to stores. It doesn’t look to be resolved anytime soon, and retailers know that.

Aldi has been as affected by these problems as much as any company. It’s especially apparent in the middle aisle, where Aldi stocks its limited buys. The store has resorted to cutting back on its weekly ad and even stealth-releasing late-arriving Aldi Finds. Everyday Regular Buys are affected, too: we’ve seen that in everything from frozen burritos to fruit cups.

Even when the supply chain snarls are (eventually) worked out, Aldi has a looming problem. It is growing rapidly, and it needs suppliers to stock its new stores and its larger existing stores. As the company grows, it is going to need more: more Regular Buys, more Aldi Finds, more food items, more non-food items.

Aldi doesn’t make any of the products it stocks on shelves; every single thing you see is contracted through outside suppliers, most of them rebranded under Aldi private labels. That puts the burden of product supply on the companies Aldi works with.

Filling that supply demand is a tall order, even when there isn’t a supply chain crisis. Some Aldi suppliers are small and may have trouble scaling up their operations to meet the increasing Aldi demand. Think about, for example, the Aldi manufacturers who make limited buys like toaster ovens, shoes, or weed trimmers. Every new store is a new set of inventory they potentially have to accommodate. Every remodeled store is a larger space they may have to grow to fill.

We’ve already seen some companies buckle under the demand. In 2019, Aldi sold keto bread that became an overnight craze. It proved so popular that Aldi converted it from an Aldi Find to a Regular Buy. The problem? The initial baker couldn’t even begin to meet the demand, not when customers were swiping entire store inventories in a matter of hours. It took months for Aldi to resolve the ensuing mess.

What about large suppliers? They, too, have their challenges. Some Aldi food products are stocked by big names, but those big names have other contracts to fill, too, either in the form of lucrative name brands or other grocers. Even if a supplier has a large operation, it may have limited ability to shift production toward Aldi, as that siphons supply away from other destinations.

We’ve already seen how Aldi has worked to deal with these supply challenges. For example, Aldi uses different suppliers for many of its food products, including milk and produce. In other words, Friendly Farms Whole Milk in New York is going to come from a different supplier than Friendly Farms Whole Milk in Florida, regardless of whether or not the label is the same. (Aldi tries to keep a uniform level of quality when possible, but it’s not a perfect art: this might be why there are some differences of opinion in different regions about certain products.)

It’s also safe to assume that, as Aldi grows, it will continue to seek out new suppliers to fill gaps.

But Aldi also has had to accept that it can’t have everything everywhere. Any regular Aldi shopper knows that some products aren’t available in all stores. This is true of everyday Regular Buys, Seasonal Favorites, and, of course, limited Aldi Finds. Sometimes you’ll see the disclaimer on the Aldi site or in the weekly ad, while other times you just won’t see that item in some stores. I live close to several Aldi stores, and there are some items that are in some of the stores but not others. I wouldn’t be surprised if part of that is because of specific customer buying preferences in those stores — I’m certain Aldi has that data — and I also know that it is also a matter of having the product to stock.

Some staples, though, are non-negotiable. If you’re Aldi, you can’t afford not to have certain products like paper towels, burgers, or cheese slices in every single store. Keeping those things readily available will be one of the most important things Aldi will have to work out as it adds new stores in new places.

Make no mistake: this is a challenge Aldi has and will devote countless worker hours to. To borrow from the Vanderbilt-Rockefeller tale, Aldi intends to make sure its trains are full.