Aldi Doesn’t Play the Sales Game. I Love This. 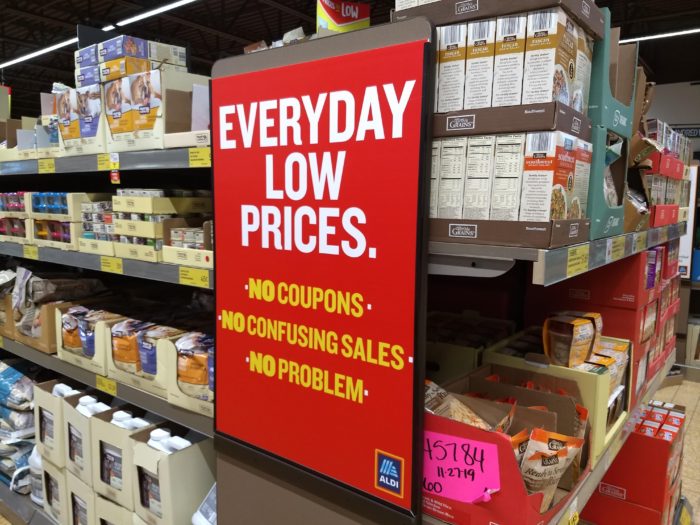 “How much are you paying for those pork steaks, honey?”

I knew the voice. It was an acquaintance of mine and her husband. I was picking up a few things at a large traditional grocery store last year — things I could not get at Aldi, which is where I do about 95% of my grocery shopping. I had a package of pork steaks in my hands, and the older woman’s tone was gently prodding as she directed my attention to its price sticker.

She and her husband gestured to the other cheaper pork options lining the shelves, specifically toward the pork chops that were on sale. Those lay wrapped in plastic under a familiar big yellow sign that denoted they were an ad highlight that week in that particular store chain. The pork chops were $1.99 per pound, compared to my $3.50-per-pound pork steaks.

They are nice people, and to be fair they were right: it was a substantial price-per-pound difference. What they didn’t know, though, is that I had family coming to visit from out of state that weekend, and I had carefully considered what I wanted to cook for them. I settled on a regional favorite: grilled pork steaks. They have a noticeably different texture and flavor than pork chops, which I thought would be best for the occasion.

Unfortunately, Aldi does not usually sell pork steaks, and pork steaks were not currently on sale at the regular grocery store. I still planned to buy a couple of packages, though. I figured the price was what it was, and I would pay it because I wanted to make a specific meal for my relatives.

The Sales Cycle is Everything at Traditional Grocery Stores

I sometimes forget how important the game of “what’s on sale this week?” is to people who shop at traditional grocery stores. Because I do 90% to 95% of my shopping at Aldi, I rarely buy much at other grocery stores. I have a short list of favorite items I buy at the regular grocery store because they aren’t available at Aldi. It’s mostly specific brand-name products like Kraft Three Cheese Macaroni and Cheese, On the Border Tortilla Chips, locally produced honey, an amazing broccoli and cauliflower salad the deli makes, and tea flavors that aren’t available at Aldi.

Because I buy the majority of my groceries at Aldi, I don’t often pay close attention to the sales cycles in regular grocery stores. Traditional grocery stores are known for having higher prices most of the time on regular items and then running rotating sales on those items. Savvy shoppers who figure out the timing of the sales cycle can often save a significant amount of money by purchasing products only when they’re on sale.

That is not how Aldi usually operates. Sometimes Aldi’s prices fluctuate, with certain items occasionally discounted by a few cents, but Aldi’s prices on staple items generally remain pretty steady. Aldi promotes this with posters that say things like: “Everyday low prices. No coupons. No confusing sales. No problem.” (I do look forward to each week’s new and unique Aldi Finds in the Aldi ad, but that’s different.)

I know plenty of regular-grocery-store shoppers who spend time clipping coupons and carefully monitoring each week’s “buy 10 for $10” offers. They religiously stock up on yellow dot $5 meat specials and “buy 2 get a third free” promotions. There is nothing wrong with doing these things, as they can be smart ways to save money.

I used to follow sales at traditional grocery stores, too. That changed once I had enough experience shopping at Aldi. At that point, I knew the store’s inventory well enough to plan most, and often all, of my family’s weekly meals around ingredients purchased only at the discount grocer. It simplifies my shopping because I can get it done in one trip to a single store.

Because Aldi doesn’t do significant rotating sales on its Regular Buy products, it also gives me a lot of freedom as a customer. It means if my family wants chicken drumsticks this week, I can buy chicken drumsticks from Aldi without first checking to see if they are on sale and whether I should instead go with chicken breasts or thighs. The same with beef or fish or pork, or anything in the store. I don’t have to plan my family’s weekly meals based on what is on sale according the ad, and I am not restricted only to what is currently discounted because everything is already at an everyday low price.

I don’t have to dig any weekly ads out of the recycling bin to plan my menu and make a shopping list. I can plan meals for the week, put what I want on my shopping list, and know that I am not going to overpay or miss out on a promotional deal. I can indulge my family’s preferences and requests without guilt.

Another bonus: because I can buy my groceries for less money from Aldi, I also don’t feel bad about spending a little extra on specific items or luxuries at the regular grocery store sometimes.

That includes the occasional pork steak.