Like a lot of people, I’m not an expert on cookware. I do know that not all cookware is created equal, and I do know that some Teflon-based cookware lasts longer based on how it is made and how the Teflon is applied.

I also know that you tend to get what you pay for. Most big box store cookware, for instance, tends to be cheap but tends to last as long as you would expect a cheap product to last. On the other hand, Calphalon tends to make more quality cookware, but it also costs more money than you’ll pay at Walmart. We saw the difference in a real way when we bought a single Calphalon skillet to complement our mostly big-box store stock … and the Calphalon proved more substantial and longer-lasting than anything else we’ve owned.

Except the first time I bought an Aldi skillet. 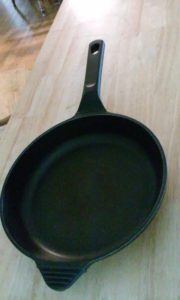 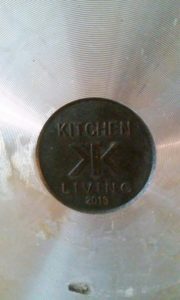 Boy, was I surprised. For one thing, it was heavy — heavier than anything I’d owned except for the Calphalon. It took a little longer to heat than my other, thinner skillets, but it cooked incredibly evenly. And the nonstick coating practically pushed the food off the skillet every time.

It lasted for about five years. We used this skillet nearly every day and all it did was cook better than anything we own. Even the Calphalon we had didn’t do this well for this long. It was incredible.

Alas, after all those years I could no longer ignore the aging nonstick coating. In 2018, I replaced it with a Crofton skillet, which, while competent, didn’t have the heft of the Kitchen Living skillet.

It was sure good while it lasted.