Frozen waffles are a go-to choice when you want an easy hot breakfast. Aldi sells Breakfast Best Homestyle Waffles in its freezer case, but how do they compare to name brand Kellogg’s Eggo Homestyle Waffles? We put both brands to a side-by-side test. 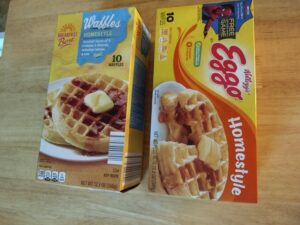 Aldi’s Breakfast Best Homestyle Waffles are in stores all the time as a Regular Buy product. Aldi also used to sell whole grain waffles as part of its Fit & Active brand, but I haven’t seen them in stores for a while.

While I don’t think of waffles as healthy, the Aldi waffles pack less of a nutritional wallop than the Eggo ones. One serving of Eggo Homestyle Waffles has 50 more calories and also has slightly higher levels of saturated fat, sodium, and carbs compared to Aldi’s Breakfast Best Homestyle Waffles. 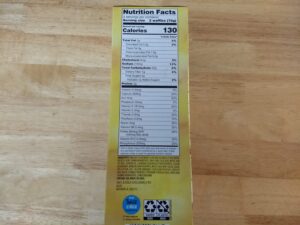 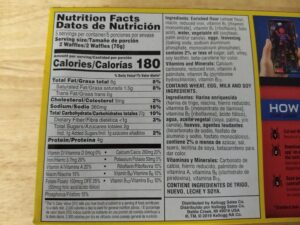 Aldi’s Breakfast Best Homestyle Waffles have instructions for preparing in a conventional oven/toaster oven or in a toaster.

To prepare in the conventional oven/toaster oven, preheat the oven to 375 degrees. Place the frozen waffles in a single layer on a wire rack for 2 1/2 to 3 minutes or until crisp and hot.

To prepare in a toaster, brown the frozen waffles in the toaster at a low setting.

The instructions then state to serve waffles warm on a plate with butter and syrup. I prefer Aldi’s Specially Selected 100% Pure Maple Syrup.

My family found that the two waffles brands were alike in taste and texture. The only difference we noticed was purely aesthetic: the Aldi waffles had rougher-looking edges, while the Eggo waffles had neat edges. Otherwise, you really can’t tell the difference between the Aldi brand and the name brand. 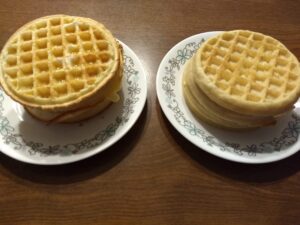 Aldi’s Regular Buy Breakfast Best Homestyle Waffles are half the cost of name-brand Kellogg’s Eggo Homestyle Waffles, and in my family’s taste test we could not distinguish a difference between the two brands. We only noticed that the Eggo waffles are a bit prettier, with neat edges, while the Aldi waffles’ edges are less well defined. That doesn’t affect the taste, though. Recommended.