Protein waffles seem to be in the spotlight these days. While many Americans are not lacking for protein in their diets because they eat plenty of it in the form of meat, there is an advantage to adding protein to popular breakfast foods such as waffles or pancakes, and that is that you’re less likely to feel hungry before lunch time. That’s because low-protein breakfasts such as sugary cereal or traditional white flour-based waffles or pancakes simply don’t make us feel full like protein-packed foods such as meat or dairy do.

Aldi sells protein pancake and waffle mix year round, so you can easily whip up some filling breakfasts in your own kitchen.

Also, Aldi recently sold frozen pre-made protein waffles as a limited-time special, so if you’re really strapped for time and want convenient, filling breakfasts, you may want to stock up on these waffles while they’re around. 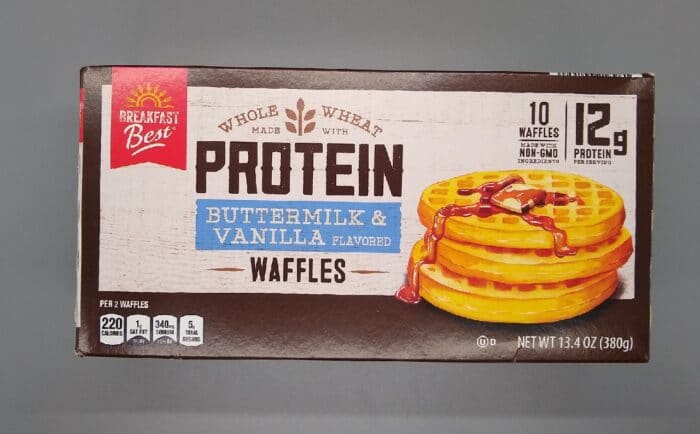 Breakfast Best Protein Buttermilk & Vanilla Waffles cost $2.99 for a 13.4-oz. box of 10 waffles at the time of publication.

These are an Aldi Find (Special Buy), which means Aldi only sells them for a short time. Remember: Aldi does not offer online ordering for its specials, so once these sell out at your local store, they’re gone.

These protein waffles are kosher and are made with non-GMO ingredients. 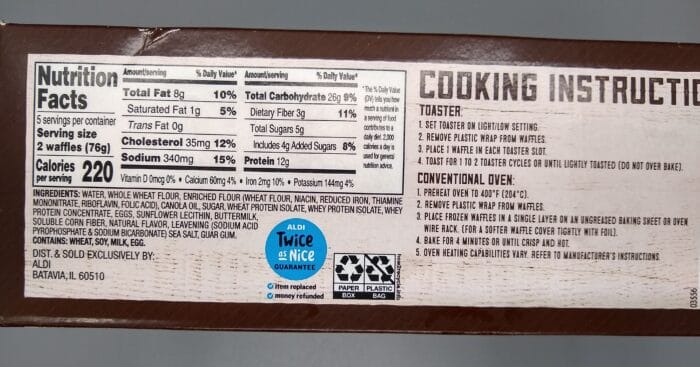 If you’re watching out for allergens, these contain wheat, soy, milk, and egg.

The waffles can be prepared in a toaster oven or in a conventional oven.

To heat them in a toaster, set the toaster on light/low setting. Remove plastic wrap from waffles and place one waffle in each toaster slot. Toast for 1-2 toaster cycles or until lightly toasted (do not overbake).

To heat in the oven, preheat the oven to 400 degrees Fahrenheit. Remove waffles from plastic wrap and place frozen waffles in a single layer on an ungreased baking sheet or oven wire rack. (For a softer waffle, cover tightly with foil.) Bake for 4 minutes or until crisp and hot. 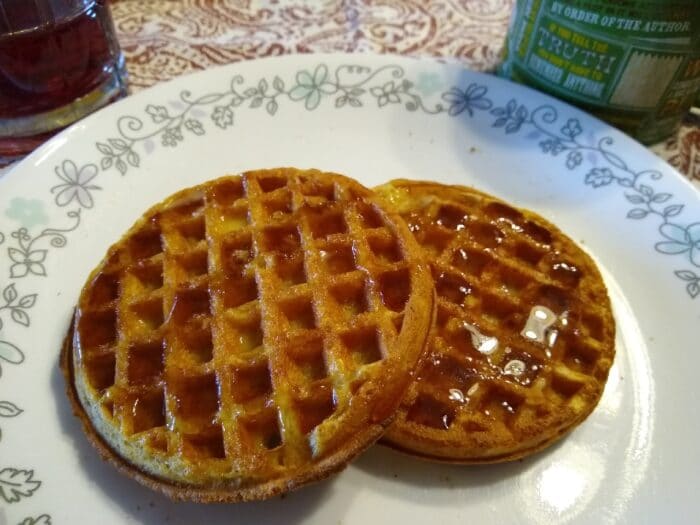 I opted to heat my waffles in my Aldi toaster oven. They are a darker color than traditional waffles, and I could smell the vanilla flavoring as they toasted.

I topped the waffles with some spreadable Irish butter and some butter-flavored syrup from Aldi, and they made a good easy weekday morning breakfast. They seem slightly more crumbly and less chewy or springy compared to traditional waffles, but the texture doesn’t bother me. They taste like regular waffles, with a mild vanilla flavor that I appreciate. They also kept me feeling pretty full until just before lunch time.

Breakfast Best Protein Buttermilk & Vanilla Waffles have an advantage over traditional waffles because they contain protein, which can keep you feeling full for longer. They toast up nicely, and in terms of taste they are not all that different from regular waffles. We also like the mild vanilla flavor.