Waffles are a breakfast favorite in my house. We prefer to make Belgian waffles with our own waffle maker, but standard frozen waffles are fine, too. Or sometimes I’ll pick up frozen protein waffles when Aldi sells them as a limited-time special.

For something a little different, this week I purchased some chocolate Belgian waffles from Aldi. 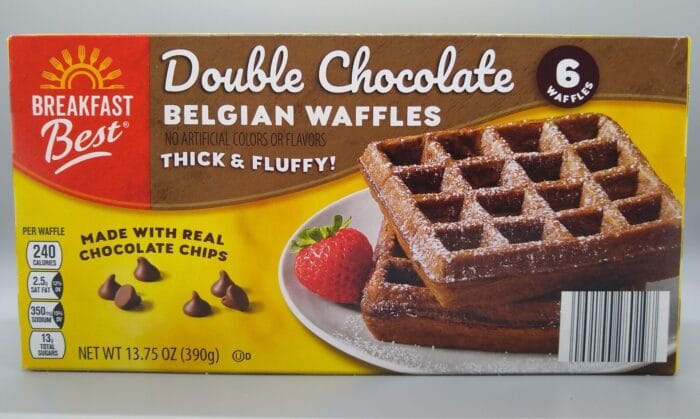 Breakfast Best Double Chocolate Belgian Waffles cost $2.69 at the time of publication for a 13.75-ounce box that contains six waffles.

These are an Aldi Find, which means they’re only in stores for a short time. Aldi does not offer online ordering for its specials after they’ve sold out at your local store.

The package states these are a product of Canada. They are “thick & fluffy” and are made with real chocolate chips. They’re also kosher. They contain bioengineered food ingredients. 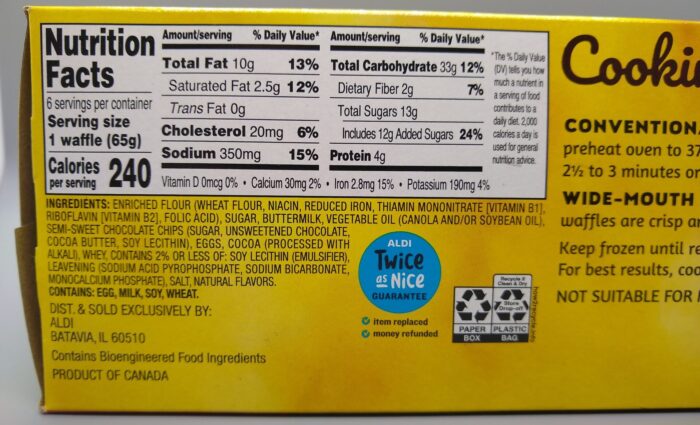 If you’re watching out for allergens, these contain egg, milk, soy, and wheat.

The waffles should be kept frozen until ready to prepare, and they can be prepared in a conventional oven, toaster oven, or wide-mouth toaster. The package states these waffles are not suitable for microwave ovens.

To toast, set your toaster at the lowest setting and toast until waffles are crisp and hot.

To bake, preheat the oven to 375 degrees and place frozen waffles on a wire rack or baking sheet for 2 1/2 to 3 minutes or until crisp and hot. If waffles are thawed, bake for 2 minutes. 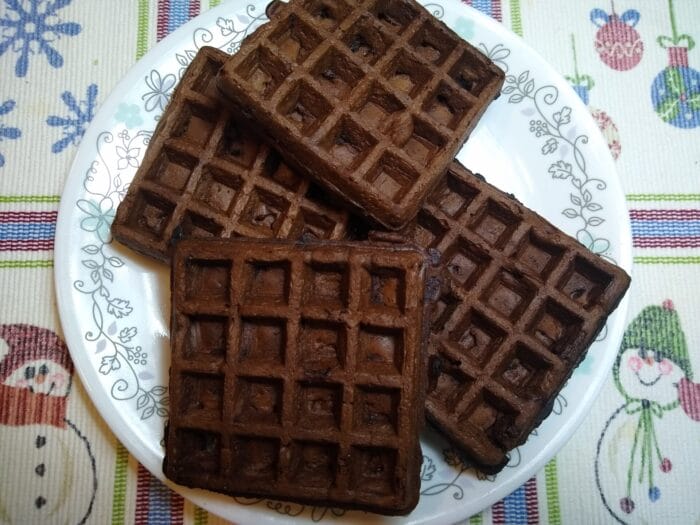 Waffles after toasting. We could see chocolate chips in them.

Be careful not to over toast or overcook these waffles, which is easy to do because of their dark brown color. They’re not like regular waffles that turn a light golden brown when done. These crisped up some more after I removed them from our toaster oven, so don’t leave them in the toaster too long thinking that they are too soft. 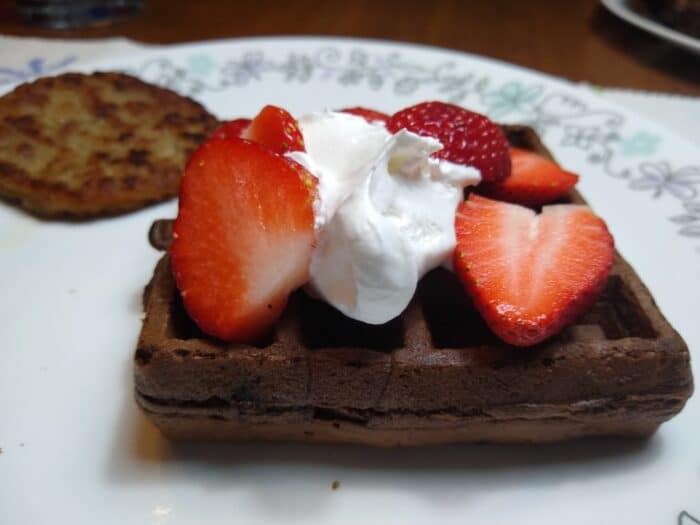 Chocolate waffles topped with whipped topping and sliced fresh strawberries. (With a sausage patty in the background.)

These waffles were crisp on the outside and fluffy on the inside. We served them alongside cheesy scrambled eggs and sausage patties (all from Aldi) for a family brinner. One family member ate their waffle with butter and syrup, while the rest of us ate them with whipped topping and sliced strawberries. They were a fun addition to our meal, and I’m glad we tried them.

Breakfast Best Double Chocolate Belgian Waffles are large and indulgent, with real chocolate chips in them. They don’t take long to heat in a toaster, or they can be baked briefly in a conventional oven. You can serve them with butter and syrup, but we like them with whipped cream and fresh berries. Great for breakfast or dessert.