EDITOR’S NOTE: This post deals with the Aldi Ambiano 7 Quart Slow Cooker, and you can read our full review of that product here. 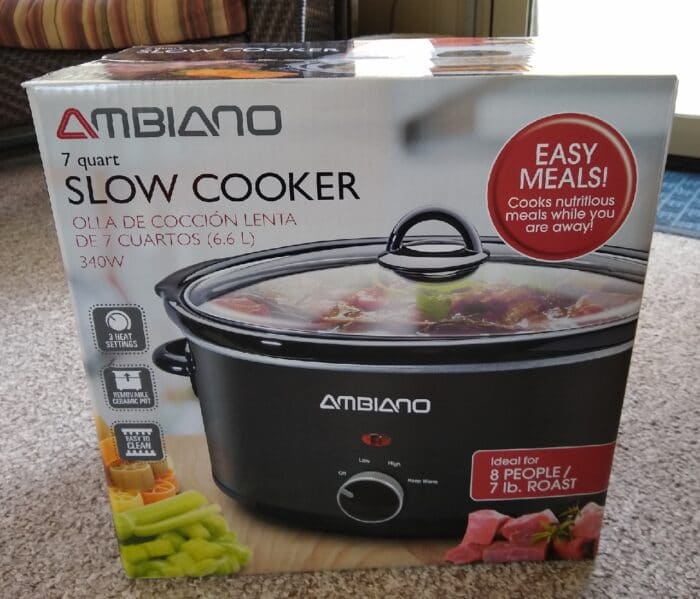 In November of 2020, I purchased the Ambiano 7 Quart Slow Cooker from Aldi. The first time I used it, I made chili, and it worked perfectly. A couple of weeks later, I pulled it back out to make some pulled pork, and I noticed the “on” light no longer lit up when I turned the control knob to the high setting.

The light still worked on the low and keep warm settings, and the slow cooker still heated to the appropriate temperature (I used a food thermometer to check the cooking temperature),so it did fully cook my food, but it did not light up on high heat.

Because the slow cooker was practically new and came with a three-year warranty, after the busyness of the holidays was done, I finally got around to sending a message to the email address listed on the warranty card and on the back of the manual.

The slow cooker is manufactured by Wachsmuth & Krogmann, Inc. The company was founded in 1797 as a shipping company in Hamburg, Germany, and has since evolved into an international trading company headquartered in Hong Kong. Its U.S. offices are in the Chicago suburbs. Wachsmuth & Krogmann makes many products for Aldi under several familiar Aldi labels, including Welby, Bee Happy, Bauhn, WORKZONE, Adventuridge, Easy Home, Visage, and Auto XS. You can read more about Wachsmuth & Krogmann in our post on some of the companies that service warranties for Aldi products here.

So, late in the afternoon on January 4th, 2021, I emailed Wachsmuth & Krogmann’s customer service at [email protected] and explained the problem with my slow cooker.

They responded very promptly, sending me a message the next morning on January 5th. The process took several steps, but it wasn’t difficult, and the company was easy to work with. Our communication went as follows:

On January 9th, my new slow cooker base was delivered to my house, so it only took about three full business days to receive the replacement. I was impressed. I unpacked the new base, plugged it in, and saw that the light worked when the knob was turned to each setting.

Unpacking my new slow cooker base.

A few days later, I placed some ribs in the slow cooker with its new base and turned it on, and the light didn’t work on the high setting. 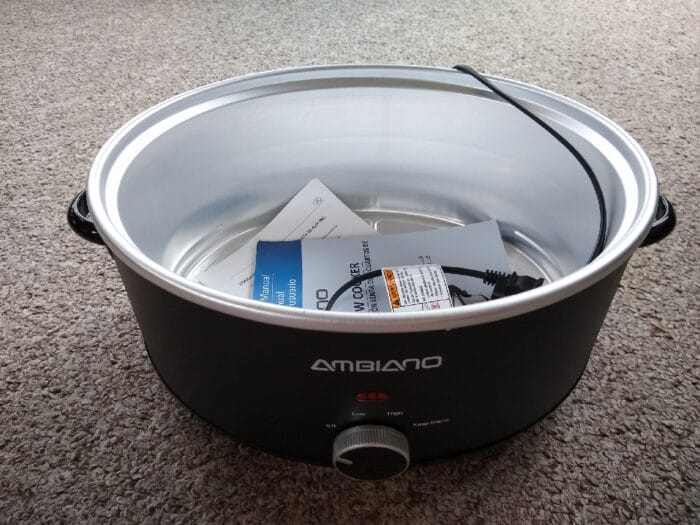 The replacement base, and they also sent another copy of the manual and warranty card.

That’s right. The replacement base had the same problem that my original base had. The base still heats up, but the light does not work when the knob is turned to high.

At that point, I opted not to take further action. The slow cooker still cooks food, and if I were to contact the company again they might send me a third base, but I don’t have confidence that it would not have the same issue. I’ll continue to use the slow cooker, but I might keep an eye out for a better model in the future.

My Ambiano 7 Quart Slow Cooker from Aldi stopped lighting up when the control knob was on the high setting. It had a three-year warranty, so I contacted the company that services that warranty, Wachsmuth & Krogmann. They responded promptly, were easy to deal with via email, and quickly sent a new base for my slow cooker. However, the new base ended up having the same problem. Because it still cooks food, I opted not to contact the company again because the light problem appears to be more than a random fluke in one appliance. Wachsmuth & Krogmann gets great marks for customer service, but this slow cooker model has some intrinsic problems that need correcting.