While it’s not nearly the most important dilemma I’ve ever faced, I’ve wrestled with the toaster vs. toaster oven debate my entire life.

On paper, toaster ovens ought to be superior. They’re more versatile, as you can use them much like a regular oven for baking small items, or you can use them as a traditional toaster for bread or bagels. The biggest toaster ovens can toast four or more slices of bread with ease. Because of the way they are designed, they can handle thicker items that might get stuck in some toasters. And because most have glass viewing windows, you can see how your food is coming along, which gives you a better chance of avoiding overcooking or burning.

But people still buy toasters. Why? For one thing, they usually toast faster than a toaster oven, thanks to the heating element being right next to the bread. For another, I find them to be a little more precise in toasting compared to the knob on many toaster ovens. And they tend to be less expensive and more compact than many toaster ovens, so they may fit better into both a smaller budget and a smaller space.

Aldi has sold both toasters and toaster ovens over the years. We’ve written about the Ambiano Toaster Oven, for example, which has been a mainstay on the limited buy shelves. Just as routine on the shelves are traditional toasters, including retro varieties, as well as this conventional 4-slice model. 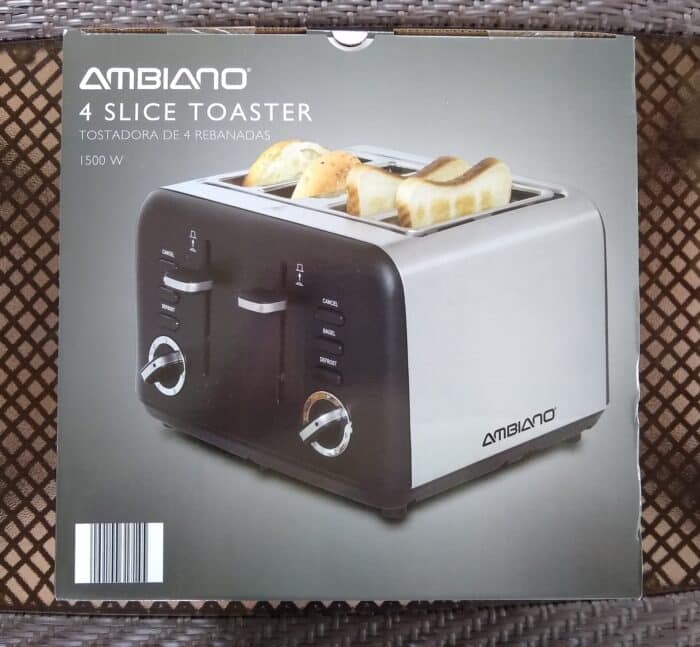 The Ambiano 4 Slice Toaster (Product Code: 59011, Model: KST038HU) is an Aldi Find. That means you can only find it in stores for a short time. Each store gets a single shipment, and once it’s sold out, you won’t be able to find it in stores until it comes back. Aldi doesn’t ship its products online, so if you can’t find it in stores, you’re out of luck. In our experience, this specific product tends to show up once a year or so, either in the summer or fall. It could vary, though.

At the time of this review, the toaster retailed for $39.99. That reflects a steady price increase on 4-slice toaster models sold by the German grocer: in 2019 it sold for $19.99 and in 2021 it cost $24.99. Even with the current price tag, though, it is still competitive with the least expensive 4-slice toasters out there, and it is less than most of them overall.

The toaster is backed by a 3-year warranty, serviced by Customer Care USA, a common Aldi warranty service provider. 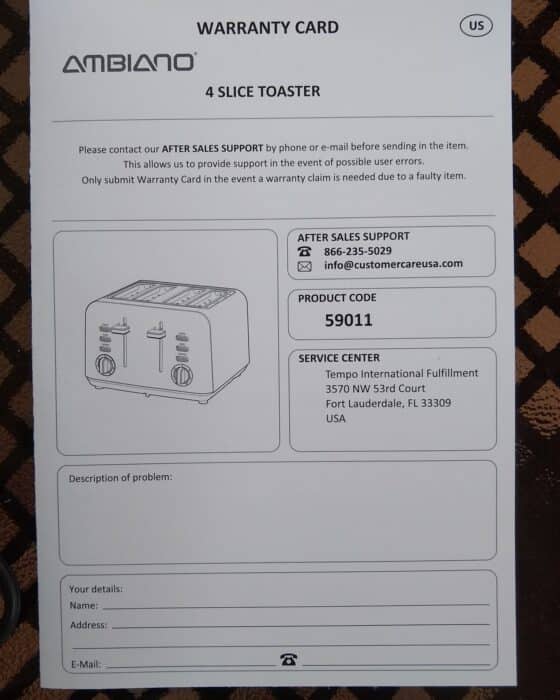 It comes out of the box with the following: 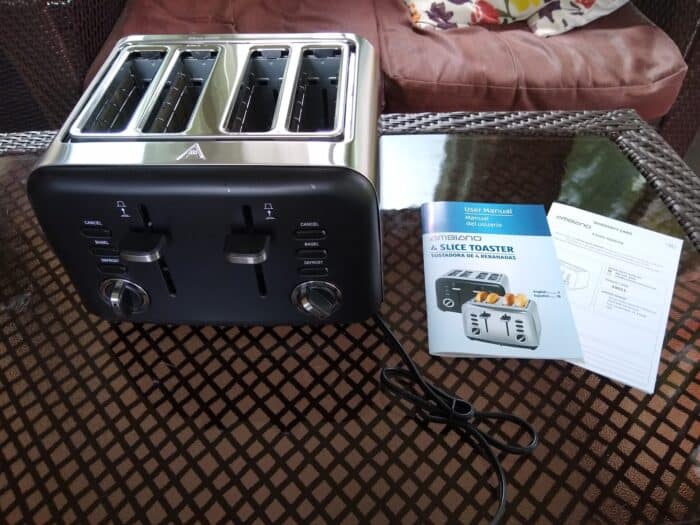 The toaster is about what you’d expect in terms of size. It’s bigger than a 2-slice toaster, but it’s also smaller than a toaster oven. It has non-skid feet, which (unlike its counterpart in the Ambiano Toaster Oven) do a good job keeping the toaster firmly in place on the kitchen counter. 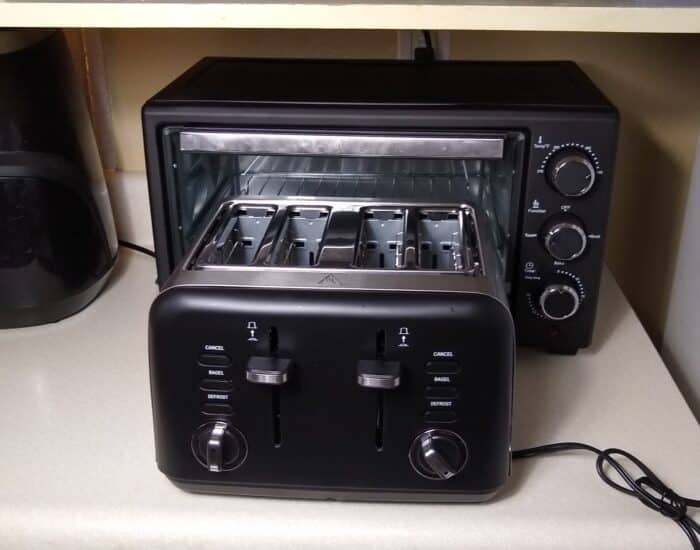 Toasters aren’t complicated devices, so setup here is pretty straightforward … in theory. Early on, the manual’s setup instructions consist of just two points: “Place the device on a work surface,” followed by “Plug the power cable into a socket.” However, on a later page, the manual belatedly adds that you should burn off production residues and such before cooking with it for the first time. To do that, set the dials to their highest settings and press down the levers to start toasting until the toaster levers move up automatically. Then you let it cool for 20 seconds, and then repeat this process three times.

As the name suggests, the toaster has four slots. Each pair of slots, left and right, is controlled by separate identical interfaces, so you can technically have two different kinds of work going on simultaneously. In a sense, this appliance is essentially two two-slot toasters welded together. That’s nice because it means you aren’t heating up the entire toaster if sometimes you only want to make two slices of toast.

Each toaster pair, then, has the following:

Let’s look at each of these in turn.

The dial. The manual says that the lowest settings, the wavy lines to 1, are for thin or dry slices of bread. Settings 2-4, it claims, are for fresh, medium cut white or whole grain bread. It specifies settings 5-6 for frozen or thick slices of bread. My thoughts on how that plays out in my tests are below.

The lever. When you push the lever down, it will click into place, the cancel light will light up, and toasting will begin. When toasting is done, the lever will release and return to its original spot at the top.

The defrost button. This mode will defrost frozen bread before toasting it, so you don’t have to do it in, say, a microwave.

The cancel button. This button will cancel whatever toasting is going on and return the levers and the bread to their starting position.

After we did the initial setup, we decided to put the toaster through a few paces, toasting both bread and bagels. I found that, on average, this toaster tends to err on the side of lightly toasted. When I used the 3 setting, for example, my toast and bagels came out without any brown on them. I had to turn the setting up to get a more expected brown.

The Ambiano 4-Slice Toaster is a budget-priced toaster with good features and a frame that stays put on the countertop. It’s easy to use, and while it isn’t maybe as toasty as I would have expected from a toaster, it seems less prone to overtoasting or burning.