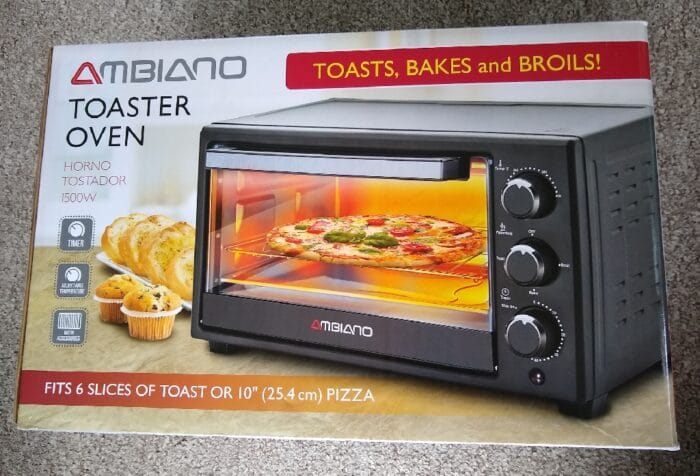 EDITOR’S NOTE: Updated below with a March 2022 progress report.

If you were to ask a group of people to name their most important cooking appliances, you’d probably get a few standard answers. Stove. Oven. Microwave. Crock-Pot. Instant Pot. Grill. Maybe something more niche like a rice cooker, an air fryer, or a Panini maker.

I’d include toaster oven in that list. Toaster ovens are handy little utilities, capable of doing everything a toaster can do, while also doing a decent impersonation of an oven. I like them for making things like toast and English muffins, but they can also be helpful in a pinch if my oven is in use and I need something relatively small baked up.

From 2017 to 2019, Aldi sold the same toaster oven model each year. It was made by Kalorik, a Belgium-based manufacturer of various kitchen appliances and kitchen products that also sold appliances in big box stores like Walmart. However, in 2020, Aldi appears to have changed course.

We set out to test the new model. 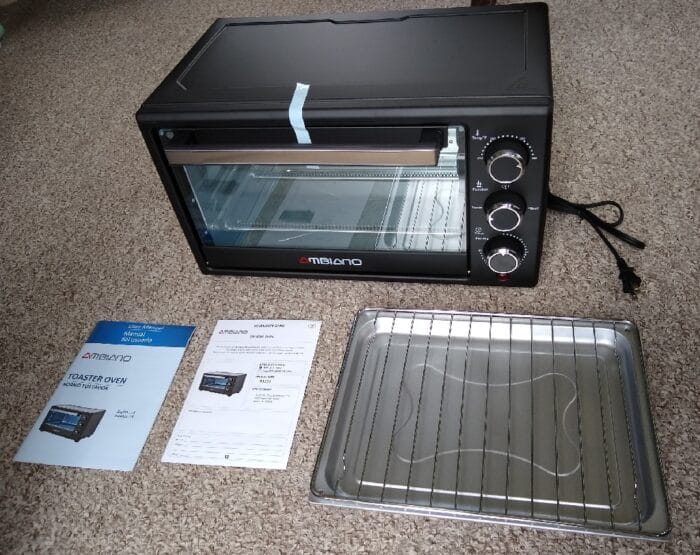 The Ambiano Toaster Oven, out of the box.

Unlike previous years, the toaster oven makes no indication of being made by Kalorik. Instead, it is apparently distributed by and warrantied through Wachsmuth and Krogmann, a frequent Aldi after-sales support company. The oven is, like previous years, backed by a 3-year warranty.

The toaster oven comes with: 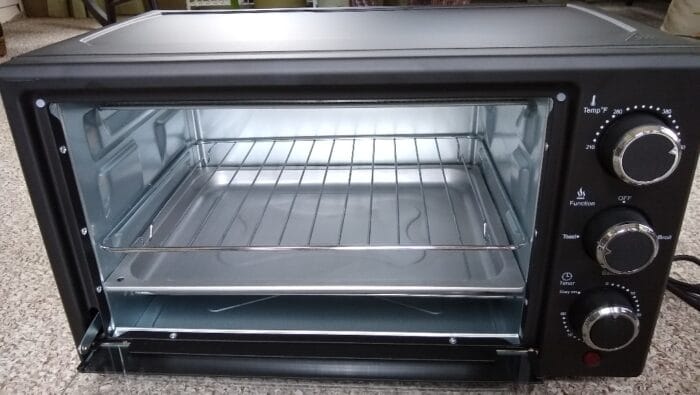 We purchased the Ambiano to replace our aging Proctor Silex Toaster Oven. We noticed that the Ambiano was both larger and lighter. In one way, this was good, because we can cook more in the Ambiano and it’s easier to move.

One drawback, though, is that the Ambiano slides around more on the kitchen counter. It’s not just the Ambiano’s lesser weight: the “skid-resistant” rubber feet feel more like hard plastic and don’t seem to do as much to stop moving as the actual rubber nubs on the Proctor Silex toaster did. It almost makes me wonder if the Ambiano toaster is missing rubber nubs. It’s not a deal-breaker — I could probably find something cheap at the hardware store to put at the bottom of the legs — but it does mean the Ambiano might move a little depending on how you pull the door open.

Setup is mostly no-fuss. The manual has the usual long list of warnings and disclaimers, which are worth looking over before first use. For example, some light smoke might come out of the oven on first use, which is normal and should disappear after 5-10 minutes. Also, be sure to read the warnings involving cleaning, as this is an electrical appliance.

Both the pan and the wire rack slide into grooves on the sides of the interior. There are three levels — low, medium, and high — and you can use the oven with the wire rack, the pan, or both. (The pan helps keep things from hitting the heating element and makes it easier to clean.)

There are, as mentioned, three knobs on the right side. The top knob is a temperature knob, which runs from 210 degrees Fahrenheit to 450 degrees. You’ll want to set it at 450 degrees if you’re toasting, and the desired temperature if you’re baking or broiling.

The bottom knob actually starts the toaster oven, and you can do that in one of two ways. One, you can turn it right to the desired time, and the oven will click down before turning off after the set number of minutes. (The manual has more detailed instructions on how to preheat and cook for longer periods.) Two, you can set it to stay on indefinitely: to do this, you pull the knob out, then rotate it left. This second mode is a little strange to me, because I’m used to a toaster where you didn’t have to pull the knob out to set this mode. Also, because the toaster is a little light, it can move a bit if you pull too hard on the knob.

The oven seems to heat up well enough. One thing I noticed is that both the top knob and the inside of the door handle — the part facing the tempered glass — can get a little hot to the touch during use. I didn’t burn myself, but I’m not used to having exterior controls and handles get hot. It hasn’t happened with past toaster ovens I’ve owned.

The Ambiano Toaster Oven is a decent kitchen appliance that can toast, bake, and broil the way most toaster ovens can, and it has a decent amount of space for the job. There are some drawbacks, though: it can skid on the counter, the bottom knob is not as intuitive as I’d like, and both the handle and top knob get hot during cooking. Also, while the price point is decent, it’s not quite as competitive as Ambiano Toaster Ovens have been in years past. You can get well-rated name-brand budget toaster ovens for around the same cost.

As much as I generally like Aldi appliances, this one isn’t quite the world-beater that some are. That said, if you’re in a pinch and you need one, this isn’t the worst option, either.

UPDATE (March 2022): After about a year and a half with this toaster oven, we decided to part ways with it. The main knob has started popping off, but that’s just the latest in the string of small annoyances that came with this toaster oven. It slides around a lot, the handle can get hot to the touch, and it’s hard to get toast across the lip of the rack. It seems to take a little bit longer to toast than it used to, too. All in all, this has proven to be a mediocre toaster oven. Hopefully Aldi can partner with a better supplier in the future.

However, we did contact the warranty company because our toaster was still under a three-year warranty. They sent us a replacement that still has some of the same quirks (it slides around on the counter, is hard to slide toast off the rack, etc.), but at least the control knob is operational on our new toaster. It works for us for now.