If you want to serve a ham for a special occasion such as Easter, Christmas, or the New Year, Aldi is a great place to find a good deal on your main course. The discount grocer has sold a variety of hams over the years, and we’ve written about several of them here, including a hardwood smoked butt portion bone-in ham, an applewood smoked uncured spiral ham, and a spiral sliced hickory smoked honey ham.

Aldi recently began stocking some different types of hams in advance of the Easter season, and I picked up a new one to try that is spiral sliced, boneless, and comes with a brown sugar glaze packet. 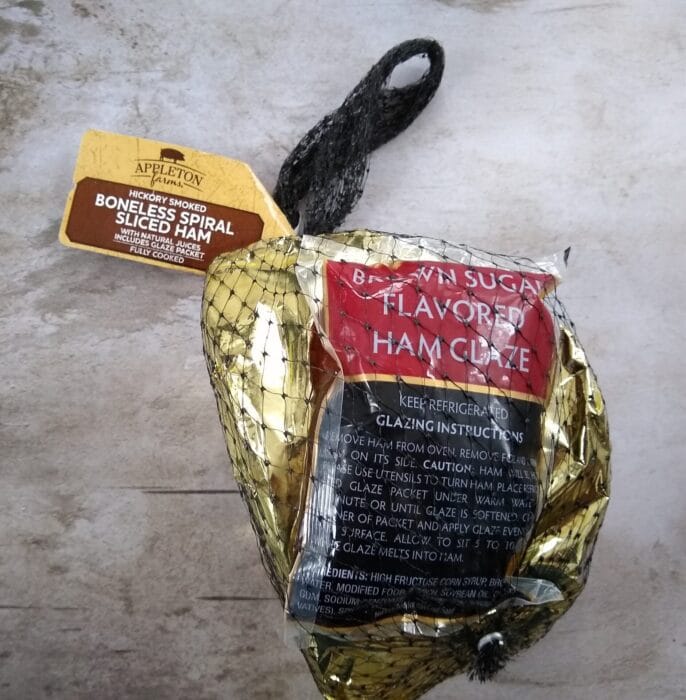 Appleton Farms Hickory Smoked Boneless Spiral Sliced Ham cost $3.99 per pound at the time of publication. I purchased a 4.13-pound ham for $16.48. 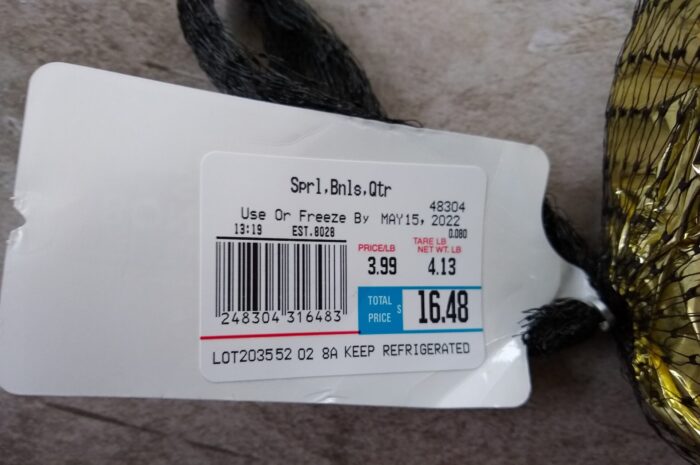 This is a seasonal item, which means Aldi will stock it for a few weeks up to a couple of months, but it’s not something you’ll find at Aldi all year. I bought this ham in late February 2022 when Aldi began stocking hams prior to the Easter season, and it has a use-or-freeze-by date of May 15, 2022. 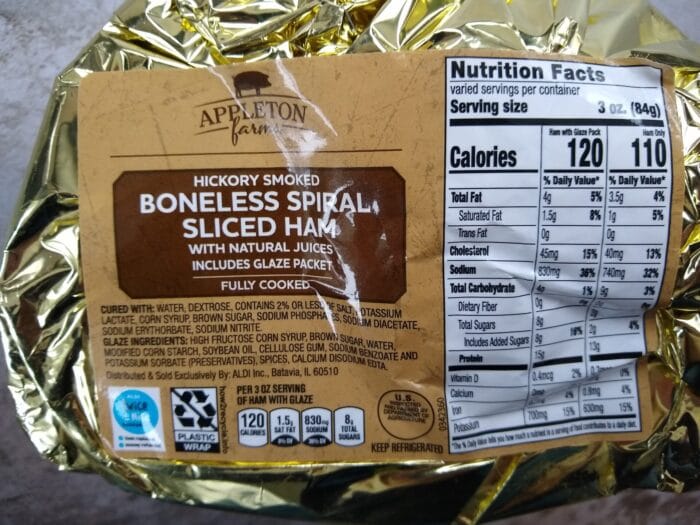 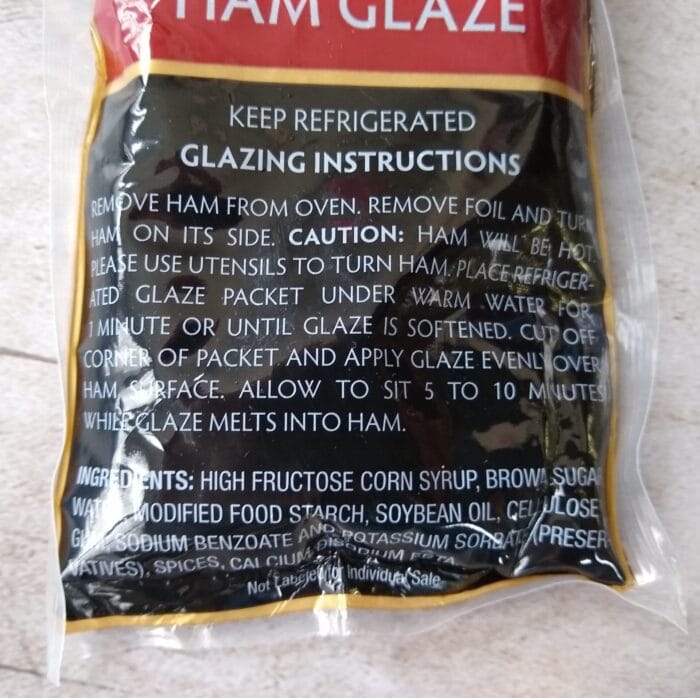 The ham is fully cooked, so all it requires is some simple heating if you want to eat it warm, although you can also eat it cold straight from the refrigerator. It comes with no heating instructions, but it does have instructions for applying the included brown sugar flavored ham glaze.

So I had to wing it to heat the ham. I wrapped it in foil so it wouldn’t dry out and placed it in a roasting pan with rack, and then heated it at 325 degrees for about 10 minutes per pound, with an estimated heating time of 40 to 50 minutes for my ham that was just over 4 pounds.

I ended up heating the ham for 50 minutes, and the center could have been a little warmer, but I had some other side dishes that were ready at that point, so I decided to go ahead and serve it knowing that it was already fully cooked.

To make it truly hot in the center, I probably could have left it in the oven for another 10-20 minutes, for a total of one hour or one hour and ten minutes. If I made this again, I might bump the oven temperature up from 325 degrees to 350 degrees to help speed the heating process more.

Another option if I were to serve this particular ham again would be to heat it in a slow cooker. It’s small enough that it should easily fit in a slow cooker with around a 7-quart capacity. I’m not sure exactly how much time it would need in a slow cooker, but I might allot 3-6 hours to heat it on low, adding the glaze toward the end of the heating time, and the slow cooker could be turned to the “keep warm” setting if necessary.

To use the glaze, the directions say to remove the ham from the oven and remove foil, then turn the ham on its side. (Be careful; the ham will be hot, and you might want to use utensils to move the ham.) Place the refrigerated glaze packet under warm water for 1 minute or until the glaze is softened. Cut off a corner of the packet and apply glaze evenly over the ham surface. Allow to sit 5-10 minutes while the glaze melts into the ham. 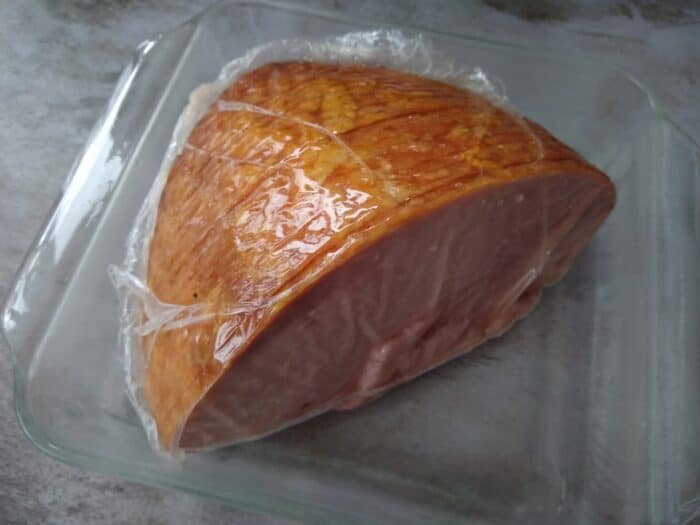 The ham with the outer wrapper removed and before heating.

The glaze is different from other ham glazes I’ve used because it’s ready to serve. Most other hams I’ve had include a powdered mix of spices in a packet, and I add water to the mix and heat it on the stove top. The glaze with this boneless spiral ham is more convenient because all I had to do was cut it open and drizzle it over the ham. 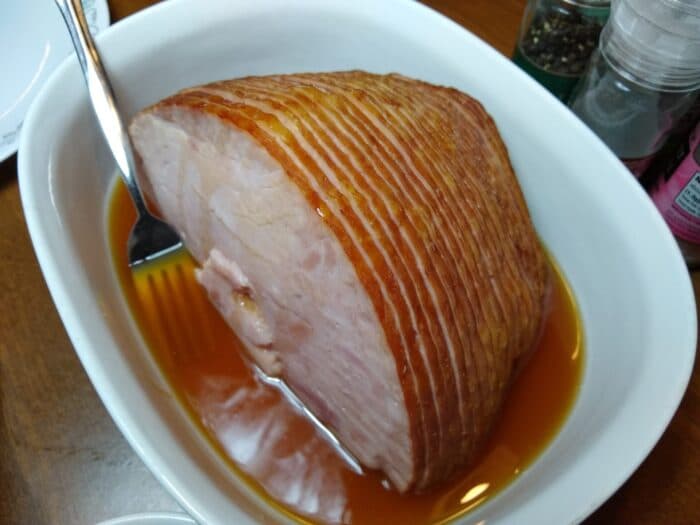 Hint: include a spoon in the serving dish so people can spoon extra glaze over their individual servings.

This glaze has a thinner consistency than other ham glazes I’ve had, and the flavor is different, more sweet, without the nuanced flavors of spices that I’m accustomed to with other ham glazes.

The spiral cut makes it easy to serve and eat. There’s a small portion of the ham toward the bottom center that is not cut all the way through, and that keeps the whole ham from falling apart entirely. The ham is tender enough that it was was easy to pull off servings with a fork, or if you want it to look tidier, you could use a knife to cleanly slice through that uncut portion.

There was also enough ham that this 4-ish-pounder served two adults and two children with plenty left over for sandwiches, tetrazzini, or whatever else you want to make with it. 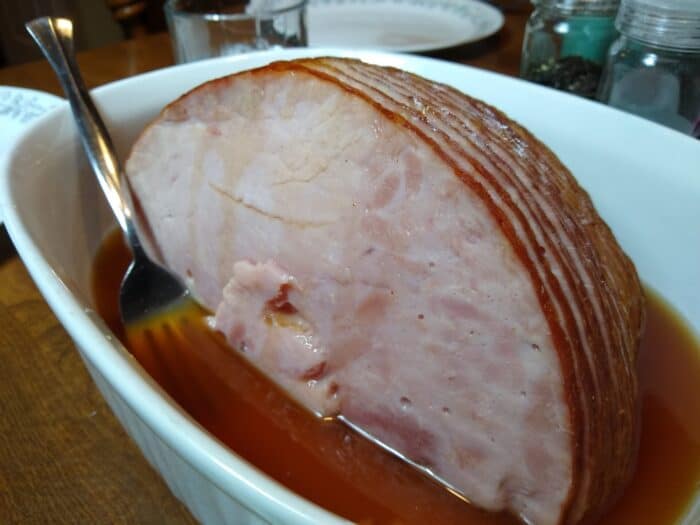 This ham has more of a processed texture compared to traditional bone-in hams. It doesn’t have any fatty bits (which my kids appreciated), and the whole ham is a uniform texture. One blogger explains this, stating: “When producers remove the bone from a ham, they have to then reshape the meat (in a machine called a vacuum tumbler) so it won’t fall apart when sliced. This can give boneless ham a bit of a spongy texture.”

One other observation: when I served this ham, some parts had a noticeable rainbow sheen on them. There is nothing wrong with the ham, and it’s definitely not spoiled. If you see an iridescent sheen on your ham, it has to do with how light hits meat that’s been cut against the grain (deli meats are usually cut this way, including ham), leaving space between muscle tissues and causing an effect known as diffraction.

This boneless spiral sliced ham doesn’t have all of the complex flavor of a bone-in ham, and of course there is no bone to make soup or ham and beans with later. However, this ham is a good choice if convenience is high on your priority list. It takes less time to heat compared to a bone-in ham, it couldn’t be easier to slice, and the glaze is ready to serve. My family also didn’t care that it’s not quite the same as a bone-in ham, and they all heartily dug in.

Appleton Farms Hickory Smoked Boneless Spiral Sliced Ham is fully cooked and can be heated in the oven or served cold. It comes with a brown sugar glaze that is ready to open and drizzle over the ham. The spiral slicing makes it easy to pull apart individual servings, and the ham has a uniform tender texture that makes it ideal for picky eaters or for making sandwiches. It doesn’t come with some of the perks of a bone-in ham (hello, ham bone bean soup), but it’s one of the more convenient hams we’ve seen Aldi sell.