Ham is one of the most popular holiday entrees, perhaps even more so than turkey. And if you shop at Aldi, you’ve probably noticed that their refrigerator and freezer cases are loaded with hams and turkeys right now in preparation for Thanksgiving, Christmas, and the New Year.

If you’re in the mood for ham, Aldi sells several different types, including spiral sliced hams with a bone (great for making ham and bean soup after the holidays), spiral sliced hams without a bone, and traditional hams that aren’t spiral sliced and that you have to carve up yourself. I’ve generally always had good experiences with Aldi hams. You’ll typically pay more for the convenience of spiral sliced ham, while non-sliced hams are great if you’re on a budget and don’t mind using a carving knife.

Aldi sells two types of uncarved hams during the holidays: a butt portion bone-in ham and a shank portion bone-in ham. The butt portion ham comes from the top half of a pig’s rear leg, and it has a t-shaped bone structure inside, which can potentially make carving more difficult, although I didn’t have problems carving a butt portion ham from Aldi last year. A shank portion ham, on the other hand, comes from the lower part of a pig’s rear leg. It has only a single long bone inside and has more of a classic ham shape.

Here, I’m taking a closer look at one of the hams Aldi sells that is not pre-sliced: the shank portion bone-in ham. This is sold under the Appleton Farms label, which is not a separate company but rather is the private label Aldi uses for pork products such as hams, certain types of sausage, and bacon. 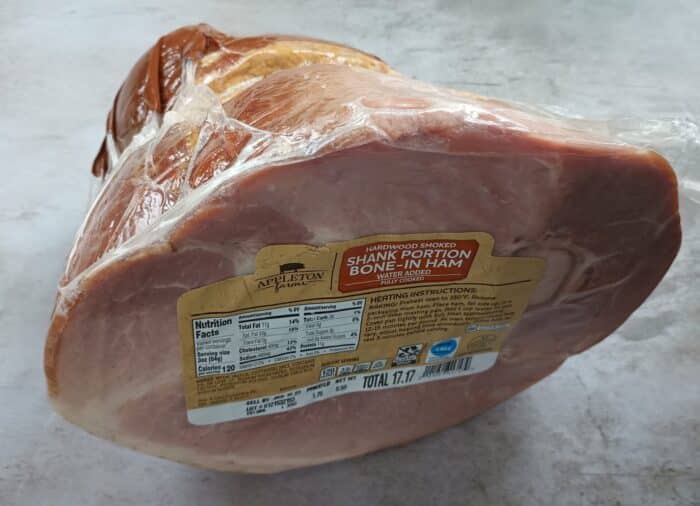 The Appleton Farms Shank Portion Bone-In Ham costs $1.79 per pound at the time of publication. I bought a 9.59-pound ham for $17.17. You may easily pay $2 or more per pound for spiral sliced hams, which makes this ham a good deal if you don’t mind doing your own carving.

The ham I purchased in mid-November of 2022 had a sell-by date of January 15, 2023. If you don’t plan to eat your ham before the sell-by date, you can freeze it for later use. To thaw, place the ham in the refrigerator and allow about four to six hours per pound for thawing.

You’ll find this and other hams refrigerated near the frozen Aldi Finds. I believe these hams are all seasonal items at Aldi, which means they’re stocked for longer than an Aldi Find, but Aldi does not sell hams all year. I generally see hams at Aldi in November and December for Thanksgiving, Christmas, and the New Year. Then I see them again starting in March or April as Easter approaches.

This particular ham is cured with: water, dextrose, salt, and 2% or less of sodium phosphates, potassium lactate, potassium acetate, sodium diacetate, and sodium nitrite. The ham is gluten free. 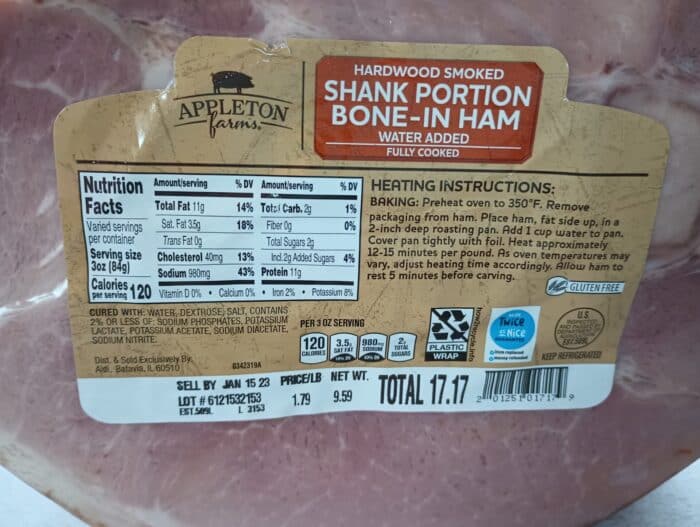 The ham is fully cooked already, and the label has directions for heating it in the oven. (You can also simply slice it and serve it cold for sandwiches, if you prefer.) To heat the ham, preheat your oven to 350 degrees. Remove the ham from all packaging. Place the ham, fat side up, in a 2-inch-deep roasting pan. Add 1 cup of water to the pan. Cover the pan tightly with foil. Heat for approximately 12-15 minutes per pound. As oven temperatures may vary, adjust the heating time accordingly. Allow the ham to rest for 5 minutes before carving. 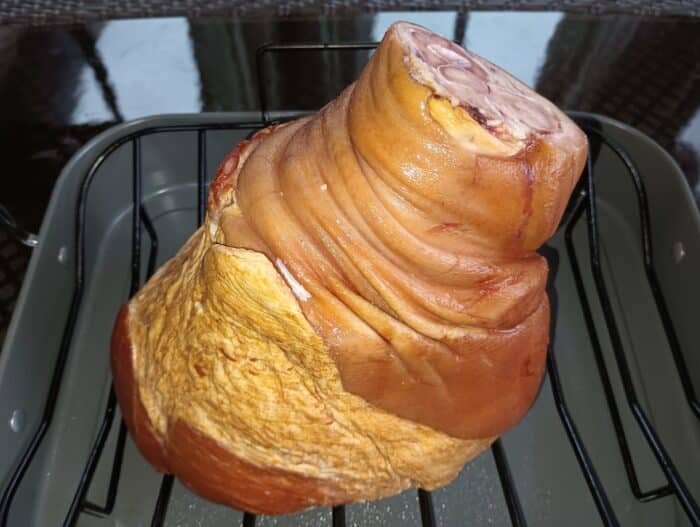 Unheated ham, right out of the package. Our ham had a lot of fat and some pig skin.

This ham has noticeable skin and fat on it when you remove it from the package, and my kids found a few small pig hairs still attached to some of the skin. It is a real pig, after all, and since we weren’t eating the skin, it didn’t bother us.

I placed the ham in an Aldi roasting pan to heat it. At 12-15 minutes per pound, I figured my 9.59-pound ham needed somewhere between 1 hour and 55 minutes to 2 hours and 24 minutes to fully heat. I ended up heating it in the oven for 2 hours and 15 minutes, and it was 140 degrees or higher when I stuck a meat thermometer in several spots. I let it rest for a few minutes, and it was nice and warm in the middle when I began carving it. 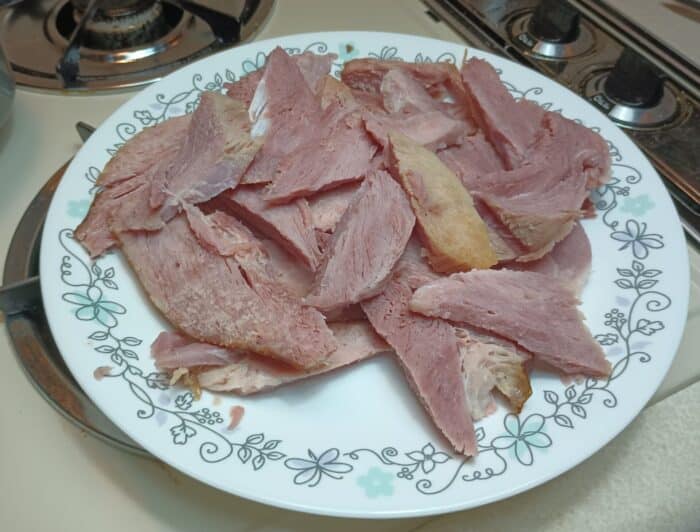 Some of the ham after carving.

This ham seemed fattier than other cuts and other types I’ve bought from Aldi in the past, and some family members made the same observation when I served this. I had a harder time separating the fatty sections from the meat, and some pieces of meat had fatty strips embedded in such a way that it was almost impossible to remove the fat. I also didn’t feel like I got as much leftover meat off of this to use in soups and casseroles. I did, however, freeze the bone with a lot of meat still attached to make cheesy ham and broccoli soup later (a family favorite). A lot of meat from this cut of ham seems well suited to meals like soup, or ham and beans, that are cooked long and low to tenderize and separate the meat from the fat.

In terms of taste, this ham is fine and my family happily dug into it when I served it alongside some mac and cheese and steamed broccoli. It was tender and didn’t dry out in the oven. It doesn’t come with any kind of glaze packet or glaze mix, but it tastes fine on its own. You can always make your own glaze, too, if that’s something you have to have.

This wasn’t my favorite ham to carve up, though. I tried a butt portion bone-in ham from Aldi last year that was not pre-sliced, and I remember it being a lot easier to carve and not all that fatty. So in the future, if I want a ham that is not spiral sliced, I’ll probably stick with a butt portion ham and not the shank portion. It all depends on your personal preferences, though.

The Appleton Farms Shank Portion Bone-In Ham is not spiral sliced, so you’ll have to do your own carving, and it doesn’t come with a glaze. However, that makes it cheaper per pound. This ham is easy to heat in the oven, which takes about two hours depending on the size of your ham. Your mileage may vary, but I didn’t find this particular cut to be as easy to carve and serve compared to a butt portion bone-in ham, especially in terms of separating the fat from the meat. I got a decent amount of meat, but I didn’t think this had as much meat as other hams I’ve bought. It does taste good, though. If you need an inexpensive ham and don’t mind carving it yourself, this is a decent option.