If you want a ham for your holiday dinner table or for a Christmas Day meal, Aldi stocks several varieties during the months of November and December. I’ve written previously about spiral sliced hams at Aldi, including their spiral sliced hickory smoked honey ham, their spiral cut double glazed ham, and their smoked uncured spiral ham.

Spiral cut hams are my favorite type of ham to serve for holiday dinners because the meat comes away from the bone easily and it’s a simple job to serve and portion out the meat. You typically pay more for the convenience of a spiral ham. If you’re looking to save some money and don’t mind carving the ham yourself, Aldi also sells some hams that are not spiral sliced.

This year, I’ve seen Aldi stock non-sliced hams that are either butt portions or shank hams, both with the bone in. A butt portion is the top half of a pig’s rear leg, and it’s more tender and fatty, which gives it more flavor. The butt end also has a t-shaped bone inside, which makes carving less of a straightforward task, but it’s not difficult. Meanwhile, a shank ham comes from the lower end of a pig’s rear leg. It’s a leaner cut of meat and has a single long bone inside.

Today I’m taking a look at the butt portion bone-in ham from Aldi. 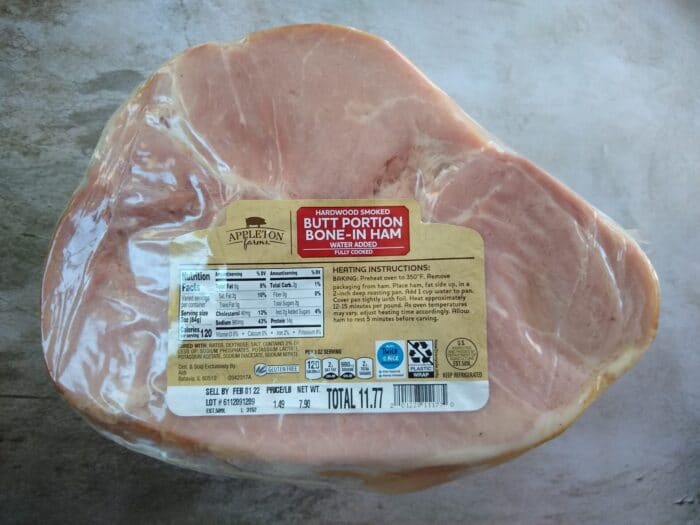 Appleton Farms Hardwood Smoked Butt Portion Bone-In Ham cost $1.49 per pound at the time of publication. I bought a 7.9-pound ham that cost $11.77. If you need an economical ham, this is it.

For comparison, I paid $4.99 per pound or around $20 for a 4-pound Trader Joe’s spiral sliced quarter ham I purchased earlier this season. In the spring of 2020, I paid $1.99 per pound for an Aldi spiral sliced hickory smoked honey ham, which came out to about $20 for a nearly 10-pound ham. A couple of years ago, I paid $2.15 per pound for an Aldi spiral cut double glazed ham, which came out to almost $29 for a ham that weighed more than 13 pounds. Finally, I paid $3.99 per pound in the fall of 2020 for a Never Any! uncured spiral ham from Aldi that was nearly 6 pounds, which came out to about $23. In other words, this smoked butt portion bone-in ham from Aldi is a good deal. It cost less by far than any other hams I’ve purchased.

This Aldi ham is gluten free. In addition, this ham, like many other hams at Aldi around this time of year, is a Seasonal item. That means Aldi stocks it for a while during the holidays, but Aldi does not sell ham like this all year.

I bought my ham on December 1st, and it has a sell by date of February 1st of 2022. I found it in the freezer section at Aldi, but none of the hams in the case were frozen solid. I’m guessing they had been refrigerated in the stock room and had only recently been placed in the freezer case on the selling floor. That meant I didn’t need to deal with thawing the ham in my refrigerator. If you purchase a ham that is frozen, the USDA says it will take about 4-6 hours per pound to thaw it in the refrigerator, so plan ahead. 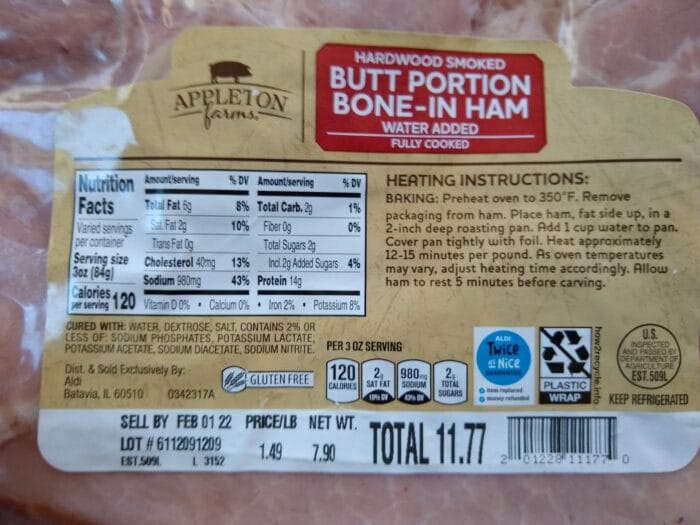 A closer look at the nutrition information, ingredients, and heating instructions. (Click to enlarge.)

This ham is cured with water, dextrose, salt, and 2% or less of sodium phosphates, potassium lactate, potassium acetate, sodium diacetate, and sodium nitrite.

The ham is already fully cooked, so all you need to do is heat it prior to serving, if you want it warm, but it’s also fine to serve it cold for sandwiches and the like.

To heat the ham, preheat your oven to 350 degrees Fahrenheit. Remove the packaging from the ham. Place the ham fat-side-up in a 2-inch-deep roasting pan. Add 1 cup of water to the pan. Cover the pan tightly with foil. Heat approximately 12-15 minutes per pound. As oven temperatures may vary, adjust the heating time accordingly. Allow the ham to rest for 5 minutes before carving. 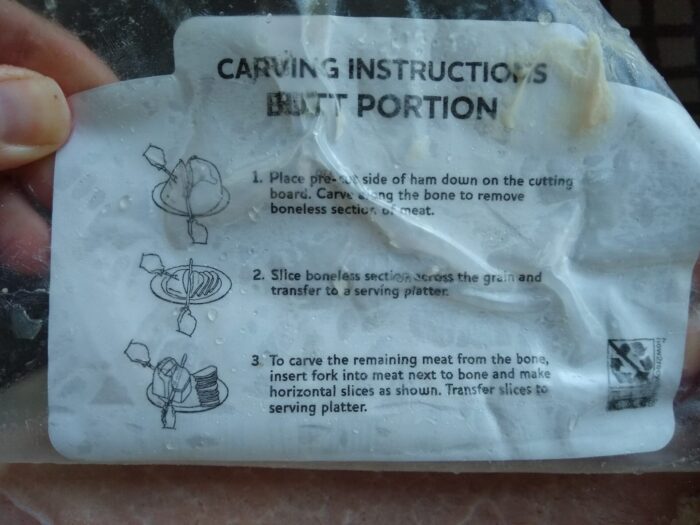 When I cut open the plastic wrap on the ham prior to heating it, I found carving instructions on the inside of the package. The instructions read:

I heated my nearly 8-pound ham for about 1 hour and 45 minutes, which is within the 12-15 minutes per pound range. That got the internal temperature to about 135-145 degrees in the thickest part of the ham, while it was warmer still in other areas. It was pretty easy to cut and slice if you can figure out where the bone is. It’s also pretty forgiving; you basically just cut off the meat where you find it, and slice it thinly. 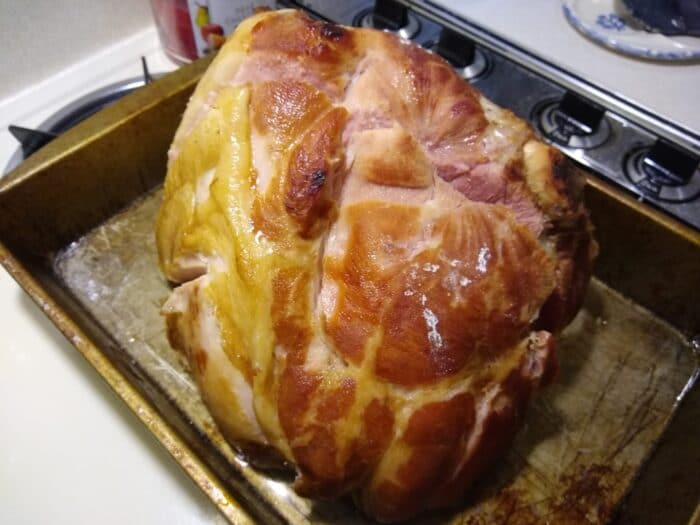 The ham after heating in my oven.

The ham gave off a lot of liquid as it heated, so make sure the roasting pan you heat it in has tall enough sides to accommodate extra ham juices.

Unlike hams that are sold already spiral sliced, this unsliced ham does not come pre-glazed and does not include a glaze packet to make your own glaze with. I enjoy glazed ham, but one advantage to heating this unglazed ham is that the roasting pan was much easier to clean afterward because there was no drippy, sticky residue on the bottom of the pan.

And if you really want a glaze for your ham, you can easily find recipes online that use common kitchen ingredients. You typically apply the glaze toward the end of the ham’s heating time so the sugars don’t burn. While this ham is not spiral cut so that you can apply glaze into the cut slices, you can still apply glaze to the outside of the ham. You could also reserve a small amount of glaze to drizzle over the slices after you cut the ham. 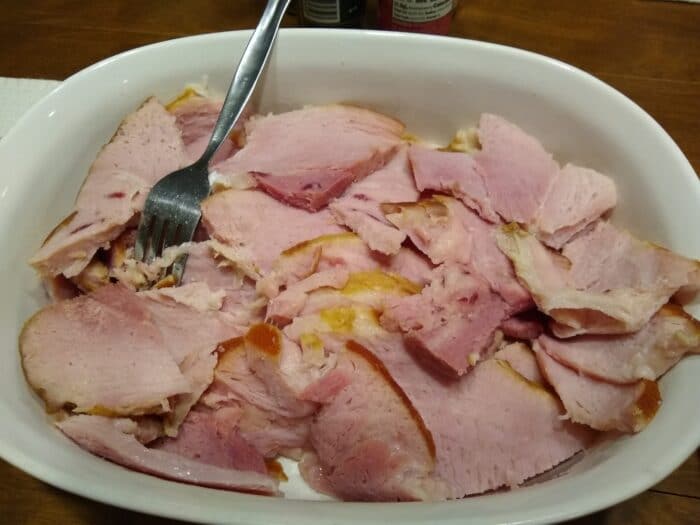 The ham, sliced and ready to serve.

For testing purposes, I opted to initially serve this ham without any glaze so I could focus on finding out what the ham tastes like on its own without additional ingredients. It’s a good ham. After nearly two hours heating in the oven, it was very moist and tender. Covering the pan with aluminum foil helped with that.

While there are fatty sections, including a large slab of fat on one outer side of the ham, I didn’t think this ham was overly fatty compared to many spiral cut hams I’ve had. It was also easy to slice off any fatty bits.

There was also a lot of meat on this single ham. After serving this ham to my family of four, I still have a large casserole dish full of slices and chunks of ham left over. I’ll probably try making a glaze to help jazz up the leftover slices of ham. I also saved the bone with plenty of meat still attached to make ham and beans in the slow cooker later.

Spiral cut or spiral sliced hams are still my favorite, but this is a solid choice if you want a nice ham dinner and don’t want to spend a lot of money. I was initially hesitant about buying and trying a ham that wasn’t precut. However, it’s a budget-friendly choice that will easily feed a small crowd, and if you’re willing to slice it yourself (which isn’t hard) and make your own simple glaze, it’s really not all that different than a pricier spiral cut ham.

Appleton Farms Hardwood Smoked Butt Portion Bone-In Ham is a less expensive ham option at Aldi. It’s fully cooked and easy to heat. It’s not pre-sliced or glazed like more popular hams sold during the holidays, but it’s easy to slice and serve. You can also make your own glaze to add more flavor if desired. Recommended.