I’ve purchased several different types of ham from Aldi over the years, and I’ve learned I can’t ever really go wrong there no matter what ham I buy. Most recently, I decided to try the bone-in spiral-cut ham in Aldi’s Never Any! product line, which features meat products without antibiotics, nitrates or nitrites, and other considerations. 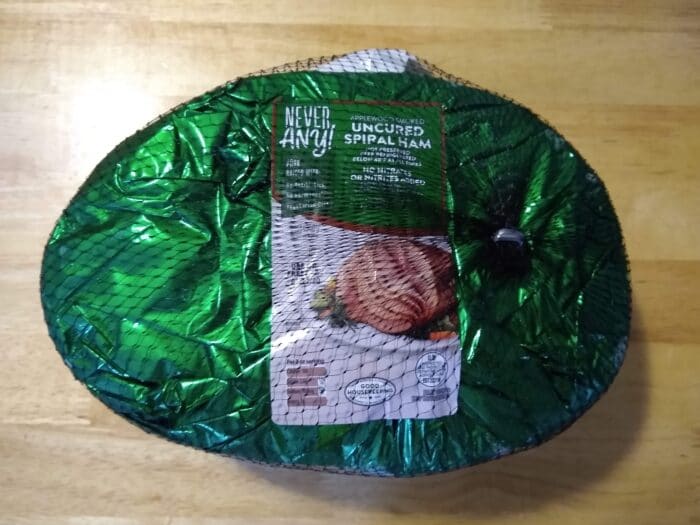 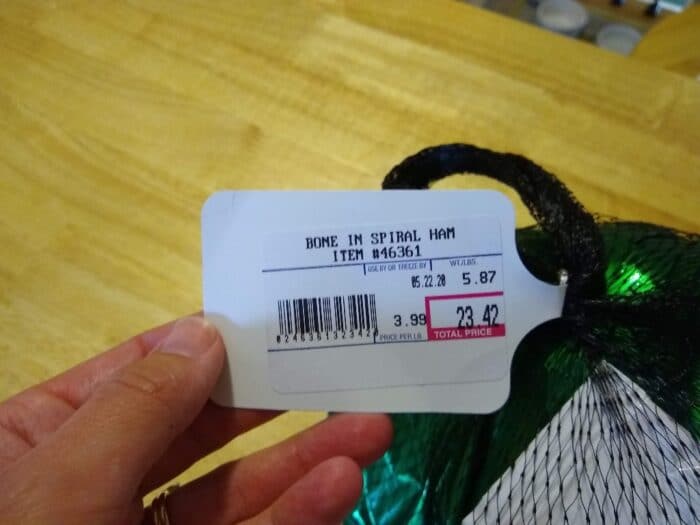 For some customers, the increased price per pound may be worthwhile because of how this pork was raised and what ingredients go into it (more on that shortly). The Never Any! ham is also smaller than most other Aldi bone-in hams, so people who don’t want as many leftovers might go for this option.

These hams are usually Aldi Finds or Seasonal Favorites, and they show up around certain holidays such as Easter, Thanksgiving, and Christmas alongside other holiday meats like whole turkeys and bone-in turkey breasts. They tend to stick around for a couple of weeks, but stores don’t stock them year round, so if you want one, be sure to pick one up when you see it in Aldi’s freezer section.

In keeping with Aldi’s Never Any! product line guidelines, this ham differs from other hams sold at Aldi because it is made from pork raised with no antibiotics. The ham has no added nitrates or nitrites except those naturally occurring in celery powder.

These pigs also were fed a vegetarian diet, although pigs are naturally omnivores and will eat rodents and other small animals if they can get them, so I’m not sure about the health of an all-vegetarian diet for pigs. A vegetarian diet is a common factor for most of the meat sold in Aldi’s Never Any! product line.

The package also claims no hormones were used when raising the pork, but federal regulations prohibit the use of hormones in both pork and poultry, so it’s not such a radically healthy claim as it first appears to be.

This ham is gluten free, is not preserved, and should be kept refrigerated at below 40 degrees Fahrenheit at all times. It is good for quite a while in the refrigerator after purchase; I got my ham from Aldi in late March or early to mid April of 2020, and the package states to use or freeze by May 22, 2020. I froze my ham, and then in June I thawed it in the refrigerator for about three days (remember: don’t thaw meat on the kitchen counter or in the sink) and heated and served it. 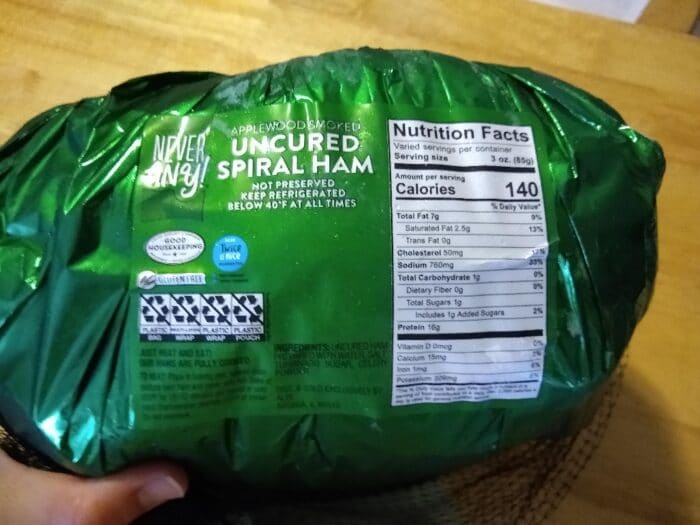 If you prepare the glaze packet that comes with the ham and serve that as well, a 1-tablespoon serving will add 40 calories, 0 grams of fat, 0 grams of sodium, 10 grams of carbohydrates (3% DV), and 9 grams of sugars.

The ingredients in the Never Any! ham are best to look at in comparison to traditional spiral hams. Here’s a breakdown:

Right away, I noticed the Never Any! ham is made with easily recognizable ingredients. I like seeing whole ingredients such as salt, turbinado sugar (which is less processed than regular sugar), dry mustard, cinnamon, orange peel, and cloves.

The difference in ingredients alone is enough to nudge me toward buying the Never Any! ham the next time I want a spiral ham. I might make an exception if I were hosting a larger crowd or family gathering where it would be more economical to serve a traditional cured ham that is both cheaper and bigger, but if I only want to serve ham to my immediate family and I don’t mind paying a little more, this Never Any! ham is a clear winner in terms of health considerations.

The Never Any! ham is already fully cooked, so to prepare it, simply heat it and eat. The package states to place the unwrapped ham in a baking pan, spread the glaze mixture over it, and cover it with foil. Bake at 350 degrees for 10-12 minutes per pound or until it reaches an internal temperature of 135 degrees. Be careful not to overcook it.

To prepare the glaze, empty the contents of the packet into a small saucepan. Add 2 tablespoons of water or orange juice. Mix well and cook over medium heat, stirring until sugar is dissolved. Let it rest for 3-5 minutes. Using a spatula or spoon, spread the glaze over the ham, and heat the ham according to the preparation instructions above.

I think I should have given my ham another day to thaw in my refrigerator (I let it thaw in the fridge for about three days), because I had to bake my ham about 30 minutes longer than the directions stated to get it up to 135 degrees. It still turned out tasty, and the outer portions of the ham did not seem dry. I served it with some instant mashed potatoes and sourdough stuffing from Aldi. 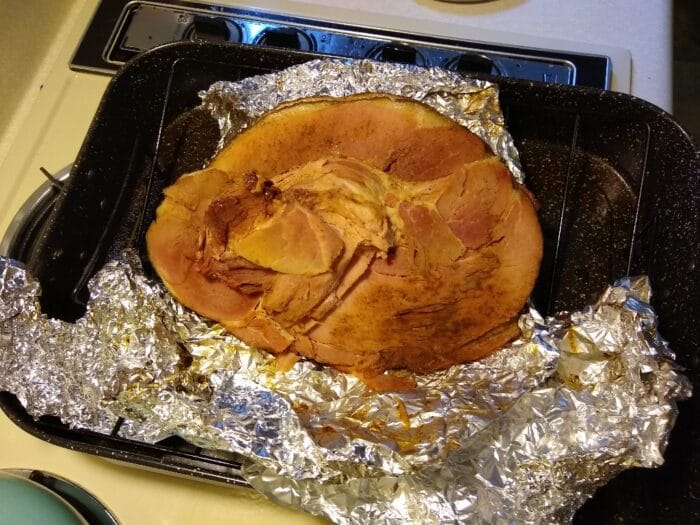 We were so eager to eat the ham, we dug in before I had a chance to snap a picture, so this is what was left over after four people had dinner.

This ham tasted like any other spiral ham I’ve had — savory with a hint of sweetness in the glaze. Because it’s a smaller ham, it won’t feed as large of a crowd, and I didn’t end up with as many leftovers as I normally would have with a ham. I still have a bone with a good chunk of meat attached to it, though. It’s in my deep freeze, and I’m looking forward to making broccoli, ham, and cheese soup with that bone in the future.

Aldi’s Never Any! Uncured Spiral Ham is an excellent choice for a small holiday meal or family dinner. It’s not as large as Aldi’s other traditional cured hams, so it won’t feed as big of a crowd, but it was raised without antibiotics and is made with whole, easily identifiable ingredients and no preservatives (except what is naturally occurring in celery powder). This ham tastes delicious, and I’ll definitely be buying it again.