Aldi is a great place to get a ham for your holiday dinner. The discount grocer sells several varieties, including a double glazed spiral sliced ham we’ve reviewed before, an antibiotic-free ham, and a spiral sliced hickory smoked honey ham. I usually buy Aldi’s double glazed spiral ham, but this year I decided to give the honey ham a try for Easter. 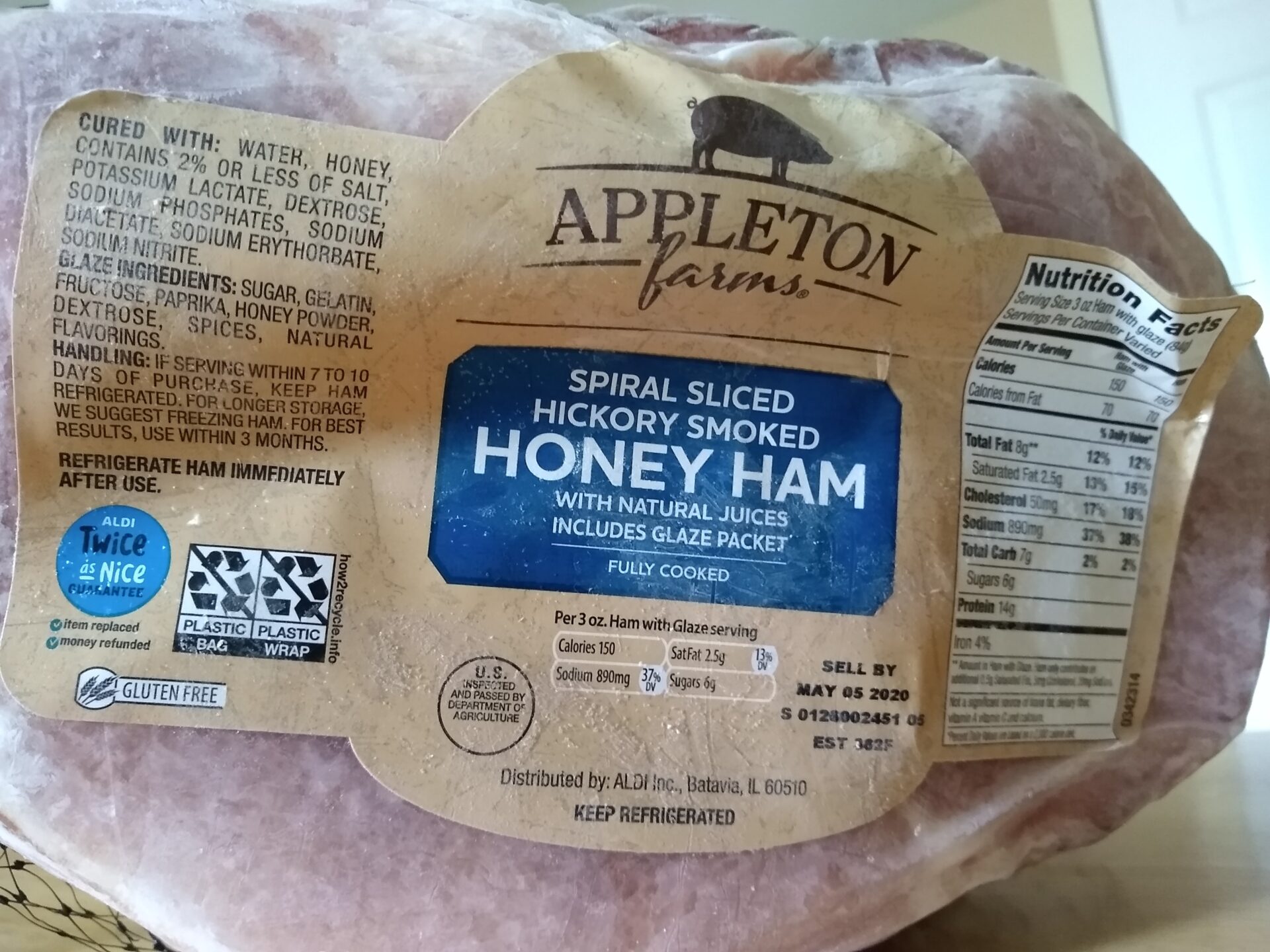 Appleton Farms Spiral Sliced Hickory Smoked Honey Ham cost $1.99 per lb at the time of publication. I paid $19.74 for a 9.92-lb. ham. This is sold as an Aldi Find or Seasonal Favorite, so it’s something that is not available in stores year round. Hams tend to show up at Aldi during November and December and also in time for Easter, as was the case with this ham.

The ham is fully cooked and gluten free. The package comes with the ham and a packet containing a powdered glaze mix.

The package states that if you’re serving the ham within seven days of purchase, you can keep the ham in the refrigerator. For longer storage it’s recommended to freeze the ham and use within three months.

A ham can take several hours to heat, so plan accordingly. To heat this ham, preheat the oven to 250 degrees. Remove all packaging materials and place the ham face down directly into a baking dish or roasting pan. Cover the ham tightly with a lid or with foil. Bake for approximately 12-15 minutes per pound (for my nearly 10-pound ham, that would be a minimum of about 120 minutes, or two hours). If you intend to glaze the ham, plan on removing it from the oven about 30 minutes before the end of the cooking time.

To prepare the glaze, about 35 minutes before the end of the ham’s cooking time, stir 2 tablespoons of water and the contents of the glaze packet in a saucepan. Bring to a boil over high heat while stirring constantly. To glaze the ham, remove the ham from the oven (approximately 30 minutes before the end of the recommended cooking time, as mentioned above). Apply the glaze evenly over the surface of the warm ham. (I use a large spoon or a basting brush and try to get some of the glaze in between the slices of ham as well.) Return the glazed ham to the oven and bake uncovered for 25-30 minutes. Remove from the oven and serve.

To carve the ham, cut around the center bone with a knife to free as many slices from the bone as desired. Then cut along the natural seams of the ham slices to remove sections of those slices that you’ve already removed from the center bone.

I defrosted my ham for a full week in the refrigerator and then heated it for 12 minutes per pound, but at the end of the cooking time, it was still a little cold in the center near the bone. Since the directions give a range of cook times (12-15 minutes per pound), our ham could have benefited from being cooked on the longer end of that range, more like 15 minutes per pound. One reason why our ham was still cold in the center may be because the cooking temperature listed in the directions is on the low side, based on my experience heating other hams in the past. Other Aldi spiral hams I’ve purchased cook at 325 degrees, while this honey ham is cooked at 250 degrees, a 75-degree difference. 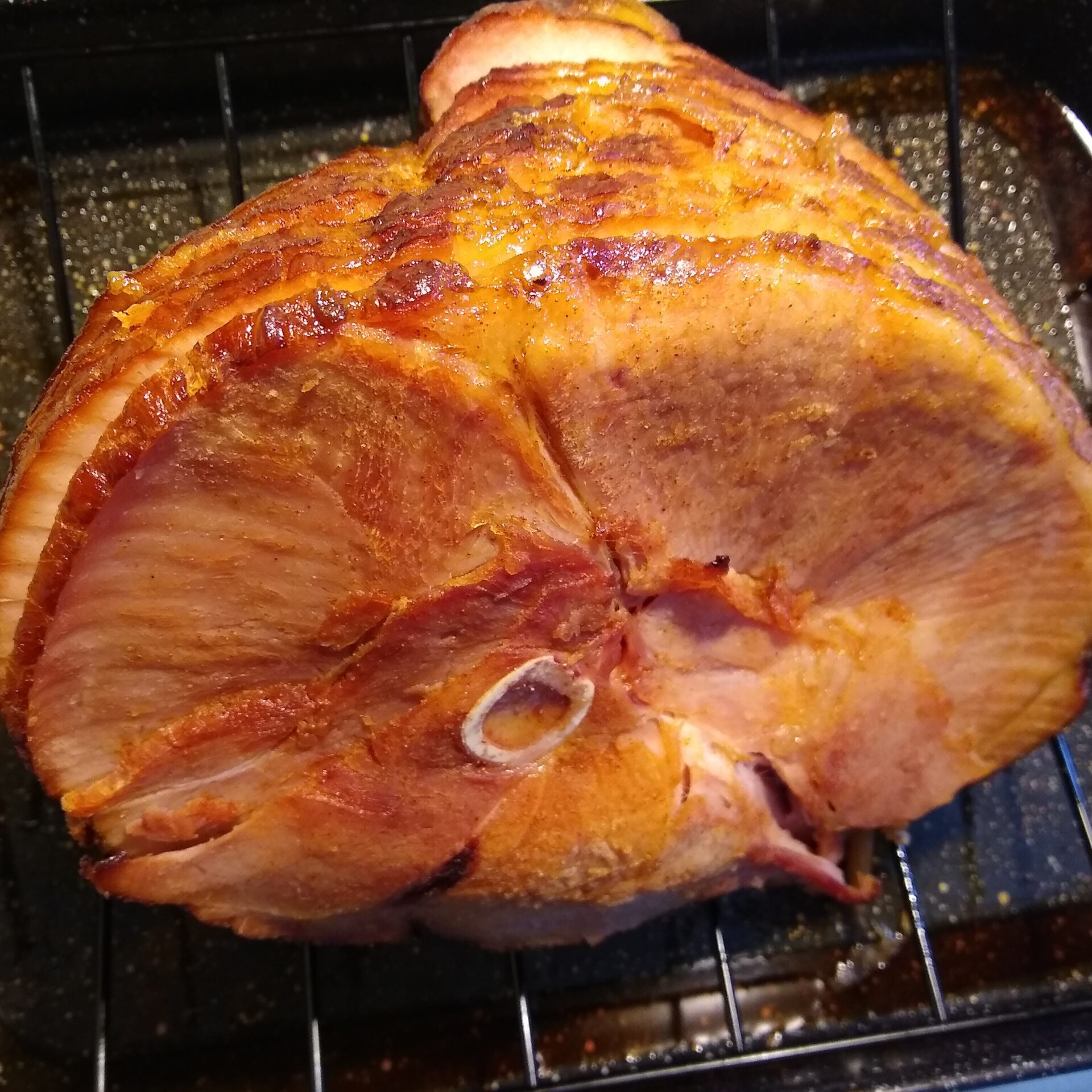 Since the ham is already fully cooked and you are just reheating it, your ham’s final temperature when you serve it is a matter of personal preference, and I’ve been to plenty of gatherings where spiral hams are served cold right out of the refrigerator.

I served our ham for Easter alongside mashed potatoes, deviled eggs, salad, and plenty of chocolates and sweets. This one has more of a honey flavor than the glazed hams I usually buy, but the flavor difference was pretty minor, and everyone in my family enjoyed the ham. It seems like you really can’t go wrong with any of Aldi’s hams.

Remember to save the bone (it freezes well) to make ham and beans or broccoli, ham, and cheddar soup later. The best part of ham is all the leftovers, right?

Appleton Farms Spiral Sliced Hickory Smoked Honey Ham is one of several ham options at Aldi. It’s fully cooked and tastes great, and the meat slices easily cut off the center bone. The instructions call for heating this ham at a lower oven temperature compared to other hams I’ve heated, so you may need to factor extra cooking time in when planning your meal, because it takes while to warm this ham all the way through if you heat it according to the instructions.