Even though Aldi is a low-inventory grocery store, during the Thanksgiving, Christmas, and Easter seasons it carries everything you need to make a top-notch holiday meal. That includes stuffing, mashed potatoes, sweet potato casserole, fixings for green bean casserole, and an array of pies and other desserts. Aldi also sells several brands of whole turkeys (including name brands such as Butterball and Honeysuckle) and ducks, and it sells a variety of hams ranging from whole to boneless to spiral cut. 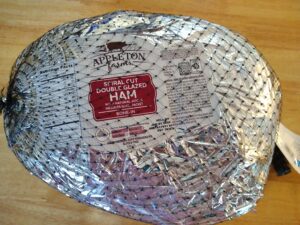 My family’s favorite type of ham is Aldi’s Appleton Farms Spiral Cut Double Glazed Ham. It’s easy to serve because it’s pre-sliced, and we like the sweet glaze it comes with. This ham is bone-in, and I prefer a ham with a bone so I can make soup later.

The Appleton Farms Spiral Cut Double Glazed Ham cost $2.15 per pound at the time of publication. The ham I purchased weighed 13.26 pounds and cost $28.51. It’s usually sold as a Seasonal Favorite, meaning it’s in stores for longer than an ALDI Find (Special Buy), but it’s not sold year round. 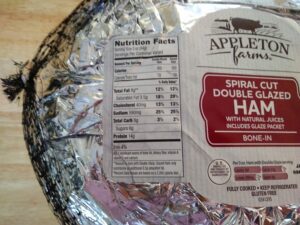 The ham is fully cooked and should be kept refrigerated until ready to heat. 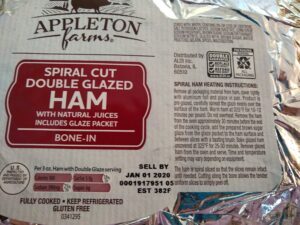 To heat the ham, remove all packaging material from the ham. Place the ham in a pan. It is pre-glazed, so carefully spread the glaze evenly over the ham’s surface. Cover the ham tightly with aluminum foil and warm at 325 degrees for 10-12 minutes per pound. Do not overheat.

Approximately 30 minutes before the end of the cooking cycle, prepare the brown sugar glaze. Empty the contents of the glaze packet into a small saucepan. Add 2 tablespoons of warm water and mix. Heat the glaze mixture on high, stirring constantly until the glaze begins to boil. Remove immediately from the heat.

Alternatively, the package gives instructions for making the glaze in the microwave, and if you go this route, you should use a deep microwave-safe bowl as the glaze will bubble up. Add 2 tablespoons of water to the dry glaze and mix well. Heat on medium high power for 45 seconds and stir. Continue heating on medium high power for 30 seconds or until the glaze boils for several seconds.

When serving, cut the ham along the bone to allow uniform slices to simply peel off.

This ham is always well received when I serve it during family gatherings. It’s tender and flavorful, and it doesn’t seem to be any fattier than other name-brand hams I’ve purchased in the past. There’s always plenty of meat to serve a crowd, and it makes great leftovers for sandwiches or soup. I freeze some of the leftovers and the bone for later meals, and we’ve never been disappointed.