In addition, if you’re familiar with Aldi, you may know that the grocer’s take and bake deli pizzas are among its more popular items. While most traditional flour-crust pizzas are off limits for strict gluten-free dieters, Aldi sells a gluten free cauliflower crust take and bake pizza with either pepperoni or veggie toppings as a year-round Regular Buy.

If you want a gluten free pizza but a cauliflower crust isn’t quite your thing, the most recent limited-time special gluten free take and bake pizza Aldi sold featured a crust made with ingredients that include rice flour. 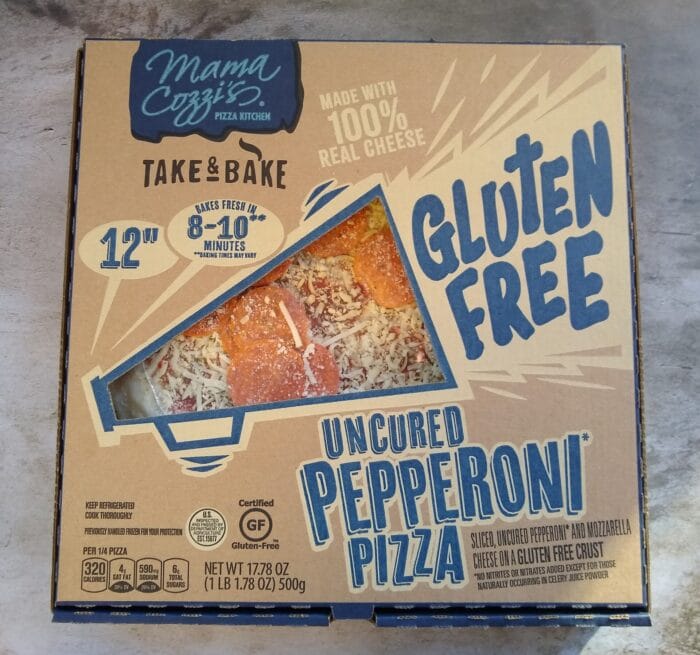 Mama Cozzi’s Pizza Kitchen Take & Bake Gluten Free Pizza cost $6.29 at the time of publication for a 12-inch pizza in a 17.5-17.78-ounce package. It was available in cheese (17.5 ounces) or uncured pepperoni (17.78 ounces) varieties. I bought the uncured pepperoni pizza, which features sliced, uncured pepperoni and mozzarella cheese on a gluten free crust.

This is an Aldi Find, which means it’s only in stores for a short time. Aldi won’t ship it to you after it sells out at your local store.

If you’re watching out for allergens, this contains milk and soy. 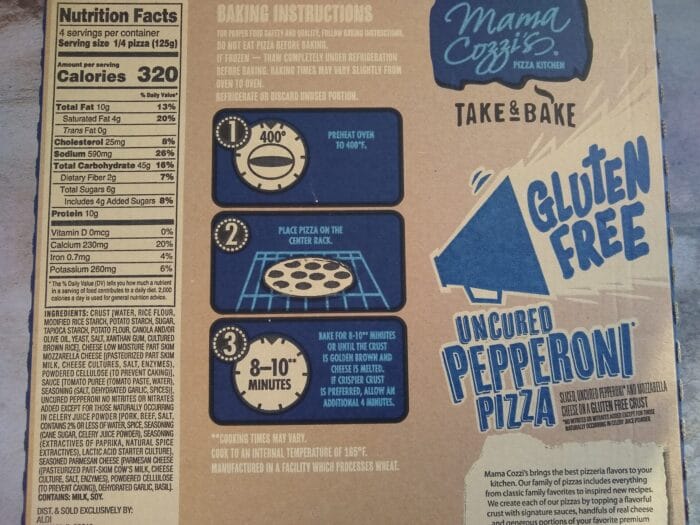 To bake this pizza, preheat your oven to 400 degrees Fahrenheit. Place the pizza on the center rack (I placed my pizza on a pizza pan with holes). Bake for 8-10 minutes or until the crust is golden brown and cheese is melted. If a crispier crust is preferred, allow an additional 4 minutes of baking time. 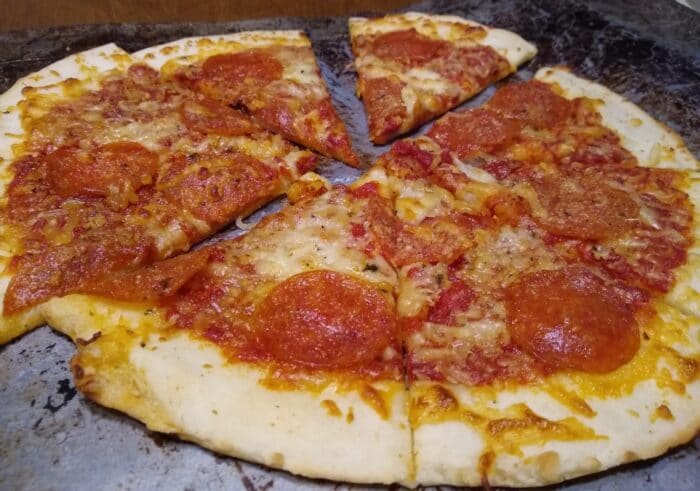 The pizza after baking and slicing.

This took about 11 minutes in my oven, and it was surprisingly good. The bottom of the crust was slightly crispy (it took a few extra passes with the pizza slicer to thoroughly cut it), and the crust had a faint sweet flavor. The sauce was flavorful, the cheese was nicely browned, and there was a decent amount of pepperoni on top. The sauce and toppings don’t go as far to the edge of the crust as they do on most other pizzas, but that wasn’t a deal breaker for my family. I didn’t tell my kids this was a gluten free pizza, and they couldn’t tell the difference between it and a traditional pizza. This is definitely a winner if you want a gluten free pizza.

Mama Cozzi’s Pizza Kitchen Take & Bake Gluten Free Pizza comes in cheese or uncured pepperoni varieties. The thin crust is made primarily with rice flour. We tried the pepperoni version, and it was excellent with a crispy crust, zesty sauce, plenty of cheese, and a good amount of pepperoni. If you eat a gluten free diet and are craving pizza, this is worth trying.