One of my family’s favorite soups at Aldi is the Bremer Bistro French Onion Soup. It’s sold in frozen blocks portioned into individual servings, and we heat it in the oven, where it turns into a rich, brothy, oniony soup topped with croutons and melted cheese. It’s a unique soup option since it doesn’t come in a can or carton, although it usually isn’t sold year round, so we stock up when it’s available.

In the fall of 2020, Aldi introduced new flavors of frozen soup blocks, so of course we had to try them. 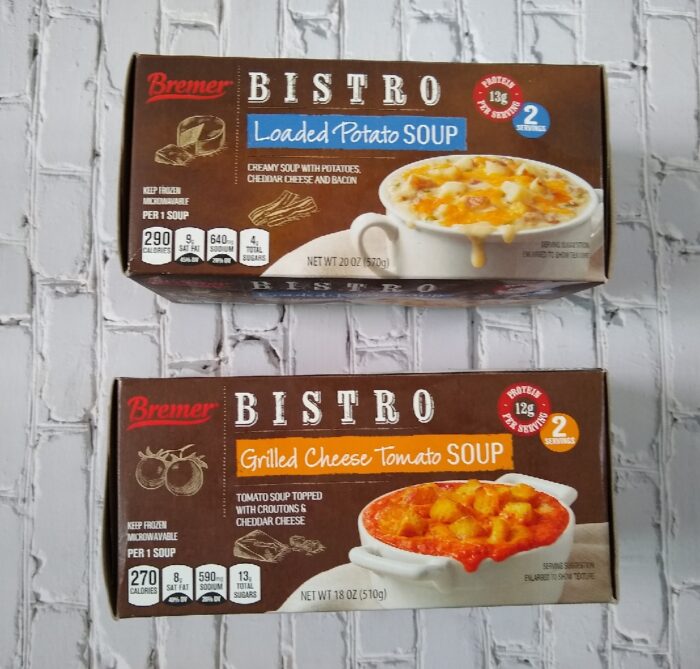 Bremer Bistro Grilled Cheese Tomato Soup and Bremer Bistro Loaded Potato Soup cost $3.99 each at the time of publication. With two servings per box, that comes out to $2 per serving.

These are Aldi Finds (Special Buys), which means they’re only in stores for a short time. Both soups are a product of Canada.

These soups can be heated in a conventional oven or in a microwave, although the different flavors have different cooking temperatures and times. However you prepare it, it should reach a minimum internal temperature of 165 degrees Fahrenheit.

Keep reading for more information about each soup variety. 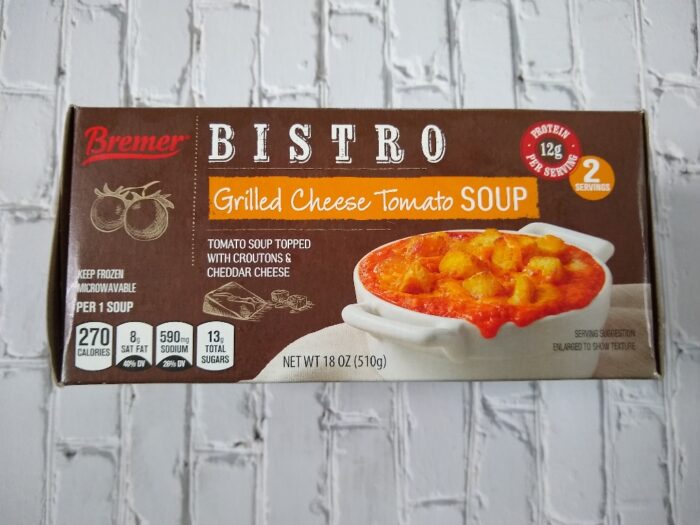 This soup is sold in an 18-oz. box that contains two servings. The package describes it as “tomato soup topped with croutons & cheddar cheese.”

This soup was okay but not something I’ll buy again.

I was disappointed to crack the box open and find that one serving had significantly less topping than the other, and after they were heated in the oven, it was evident that the serving with less topping actually had, inexplicably, only cheese on top and no croutons. (So I swiped a few croutons from the other serving to even things out.) 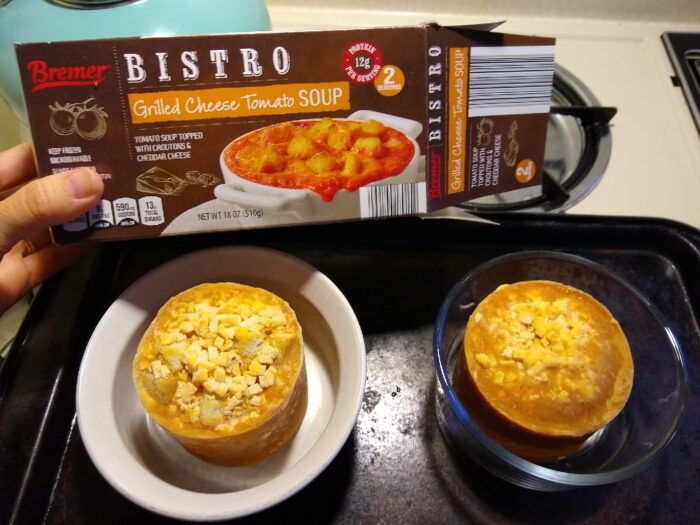 The soup itself was your standard tomato soup and was decent and thick, but it was no better or worse than a lot of tomato soups I’ve had. It was fairly generous with cheese, but the croutons were very soggy and didn’t hold up well compared to the croutons we’re accustomed to in Aldi’s French onion soup.

As a result, if I really want a grilled cheese tomato soup, next time I’ll probably make it myself using either canned tomato soup or my own recipe, and I would grill up my own sandwiches to cut into bite-sized chunks to put on top.

This contains milk and wheat. 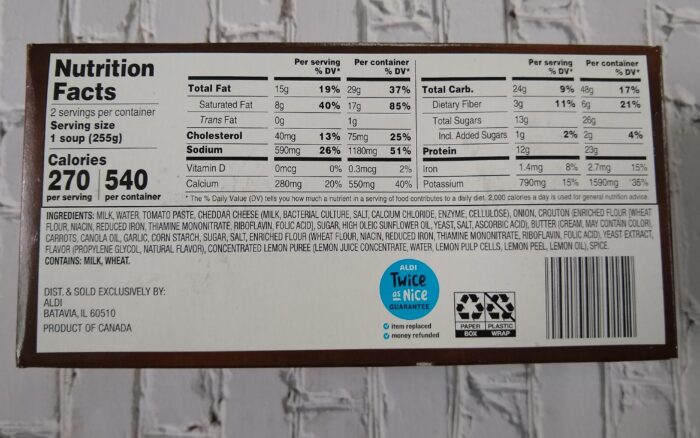 It can be heated in a conventional oven or microwave oven.

To heat in the oven, preheat the oven to 375 degrees Fahrenheit. Place one soup block, with the cheese on top, in an individual ovenproof bowl. I usually place the bowls on a baking sheet for stability on the oven rack. Heat for 45 minutes or until the cheese becomes golden brown.

To microwave, place one soup block with the cheese on top in a microwave-safe bowl. Heat on high for 3 minutes. Stir and heat 1 minute more.

I opted to heat mine entirely in a conventional oven. It wasn’t quite hot enough after 45 minutes, so I let it bake for another 5-8 minutes. 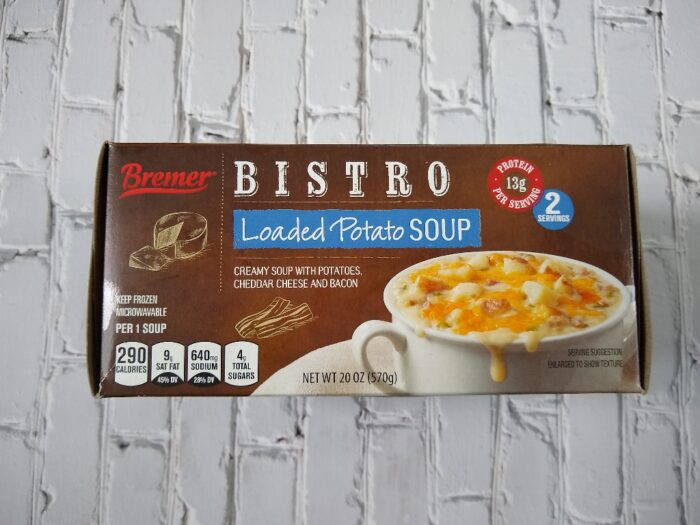 This soup is sold in a 20-oz. box that contains two servings. The package describes it as a “creamy soup with potatoes, cheddar cheese and bacon.”

This was a pretty good potato soup, with good-sized potato chunks and a generous amount of cheese on top of the soup, which turned to a thick, golden brown, slightly chewy topping as the soup baked in the oven. This cream-based soup is also thick and not runny. 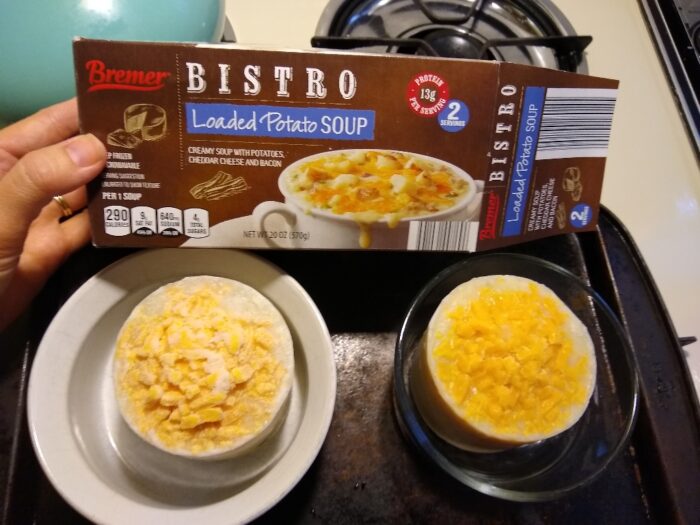 The frozen soup blocks before they went into the oven.

I’ve made a loaded baked potato soup in my slow cooker in the past, and this was reminiscent of that homemade soup in terms of taste and texture, although the homemade soup probably cost less per serving. 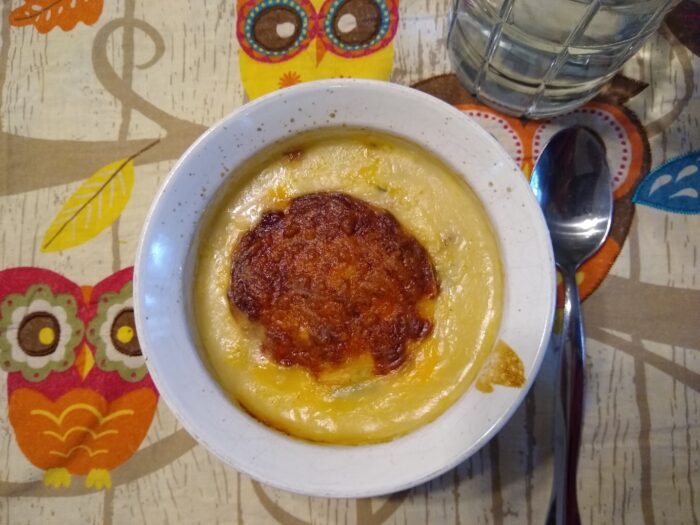 The heated potato soup, ready to eat. (Everyone started eating too quickly for me to photograph the finished tomato soup.)

This contains milk. It may contain soy and wheat. 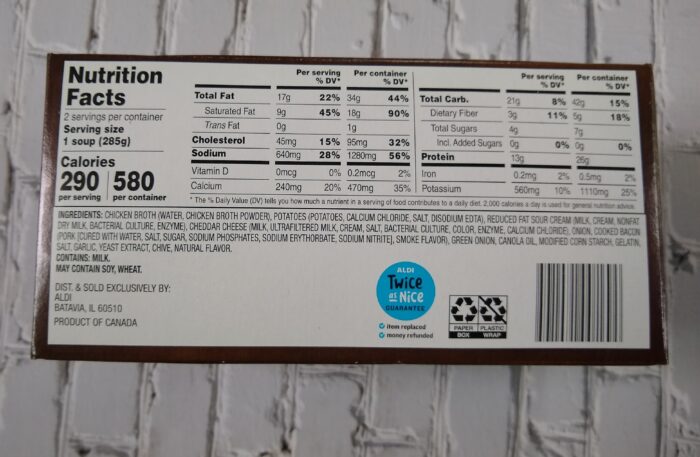 Like the tomato soup above, it can be heated in a conventional oven or in the microwave.

To heat in the oven, preheat the oven to 400 degrees Fahrenheit. Place one soup block, with the cheese on top, in an individual oven-proof bowl (as mentioned above, I always put the individual bowls on a baking sheet). Heat for 55-60 minutes or until the cheese is golden brown.

To microwave, place one soup block with the cheese on top in a microwave-safe bowl. Heat on high for 4 minutes. Stir and heat for 1 minute more.

Unlike the tomato soup, this potato soup does not have quicker oven method instructions.

I heated this soup in the oven, and it took about an hour.

Bremer Bistro Grilled Cheese Tomato Soup and Bremer Bistro Loaded Potato Soup are sold in frozen blocks that are heated in the oven or microwave, similar to the popular Bremer Bistro French Onion Soup Aldi also occasionally sells. My family liked the potato soup best, and we thought the tomato soup was okay but didn’t care for the soggy croutons (or lack of croutons) on top.