Homemade soups can be amazing. Our family makes a cheeseburger soup to die for, and the broccoli cheddar soup and tomato basil soup aren’t far behind. A well-crafted soup from scratch, along with the likes of a homemade bread, can be a satisfying comfort food, especially in the depths of winter.

As ideal as that might be, the time and labor necessary to cook a homemade soup aren’t always practical. In those instances, when you need something fast, a canned soup is an option. Not as good an option, mind you, but an option that can be done much more quickly, and — if you’re fortunate — still taste pretty good, if not great.

We’ve put a few Aldi soups to the test over the years, from its very good French onion soup to its Campbell’s chunky soup knockoffs. Here we’re taking a look at Aldi’s attempt to mimic a Progresso soup. 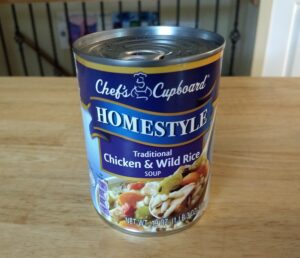 Chef’s Cupboard Homestyle Traditional Chicken and Wild Rice Soup is a Regular Buy, meaning it’s in stores all the time. At the time of this post, it cost $1.39 for a can, which is a lot less than the $2.49 we paid for the Progresso counterpart.

You won’t find too many hot foods easier to heat than this one. You pop open the can and either pour it in a saucepan or microwave-safe bowl. The saucepan method involves bringing the soup to a simmer on the stove, and it takes about 4-5 minutes. The microwave method involves pouring the soup into a microwave-safe bowl, covering, and heating for 3-4 minutes or until hot. Either way, the soup is ready in short order.

We decided to test the Chef’s Cupboard soup against the name-brand Progresso. 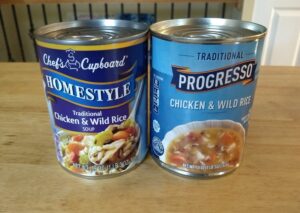 In terms of physical looks, the two soups were mostly the same. Both had equal amounts of chicken and wild rice, for example. The Progresso tomatoes were much larger, but both soups had tomatoes.

Notably, while three of the four of us preferred the Progresso, two of us only gave it a slight edge, and three of the four said they didn’t necessarily dislike the Aldi soup. (I was probably the least enthusiastic about the Chef’s Cupboard, as I didn’t care as much for the broth.) I mention this because, while the Progresso did score better with our group, it wasn’t as big of a difference as the relative prices would suggest.

Nutritionally, canned soups tend to be high in sodium, among other things, and this soup is no exception. We found that, when it came to both ingredients and nutrition, the Chef’s Cupboard and Progresso soups were similar. 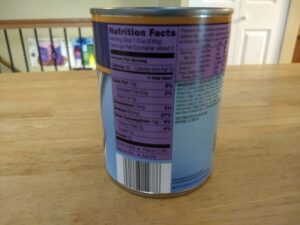 Nutrition information for the Aldi soup. (Click to enlarge.) 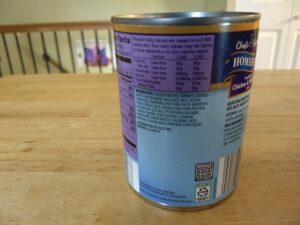 If you’re looking for a canned chicken and wild rice soup, Chef’s Cupboard is worth a look. While, in this test, we found Progresso soup to have the edge over Chef’s Cupboard, the Aldi soup is close enough that we think it more than makes up the difference on price.