Ever since my husband introduced me to Indian food when we were dating years ago, I’ve been hooked. Indian food is best when it’s purchased from a restaurant, as grocery store Indian generally doesn’t have the same intense and complex flavors. That doesn’t stop me from trying Indian food from grocery stores, though.

Aldi sells several Indian options of varying quality, including butter chicken sauce, korma sauce, and tikka masala sauce. Aldi’s cousin Trader Joe’s also sells a few Indian options, including shrimp tikka masala with rice, samosas, and masala simmer sauce. Many of the Indian selections at TJ’s are found in the freezer aisle. That is the case for their chicken tikka masala meal, which we’re looking at today. 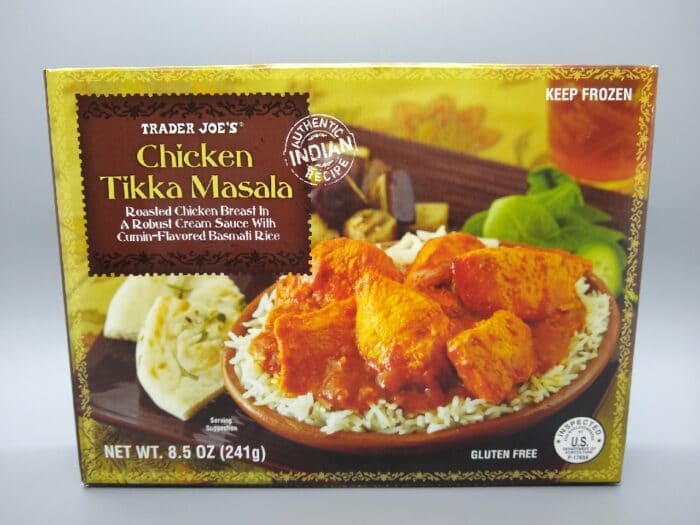 Trader Joe’s Chicken Tikka Masala cost $3.99 for an 8.5-ounce package that serves one at the time of publication. The package describes this as “roasted chicken breast in a robust cream sauce with cumin-flavored basmati rice.” It is gluten free.

If you’re avoiding allergens, this contains milk and cashews. 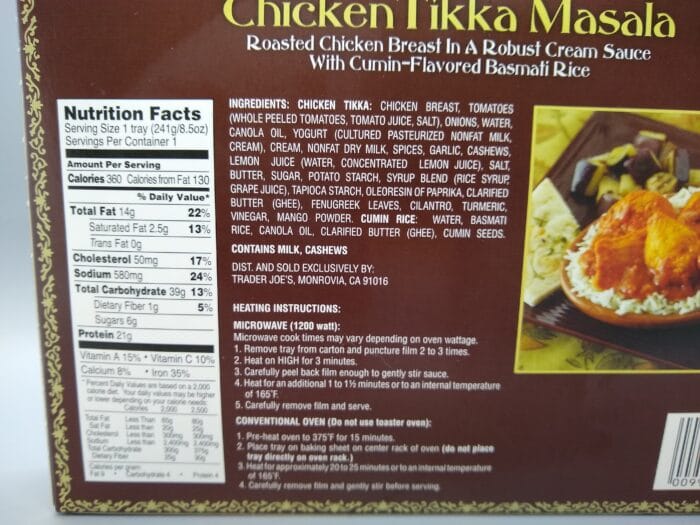 This meal can be prepared in the microwave or in a conventional oven.

To microwave, remove the tray from the carton and puncture the film 2-3 times. Heat on high for 3 minutes. Carefully peel back the film enough to gently stir the sauce. Heat for an additional 1 to 1 1/2 minutes or to an internal temperature of 165 degrees Fahrenheit. Carefully remove the film and serve.

To heat in the oven, preheat the oven to 375 degrees. Place the tray on a baking sheet on the center rack of the oven. (Do not place tray directly on oven rack.) Heat for approximately 20-25 minutes or to 165 degrees. Carefully remove the film and gently stir before serving. 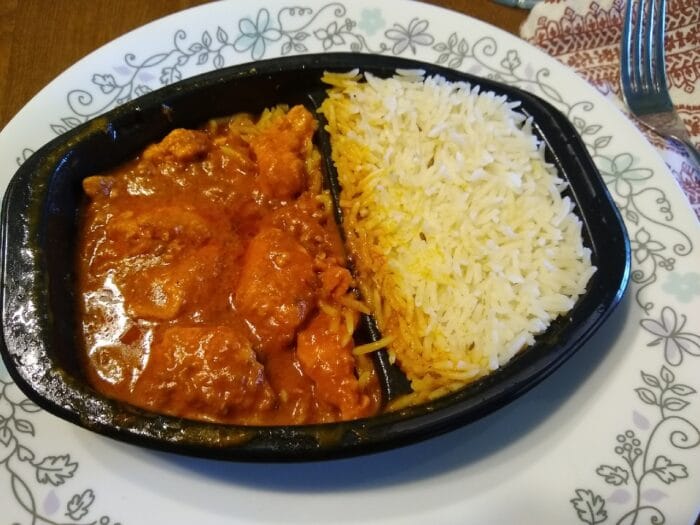 I opted to microwave this for a quick and easy lunch. It cooked exactly according to the directions and came out of the microwave at just the right temperature.

As is often the case with Indian food, this is aromatic and smells good. In terms of how it tastes, it’s good. It’s not restaurant quality, but it’s better than many other frozen entrees I’ve tried and better than some jarred sauces out there. A couple of bites of this particular dish were even very flavorful with bits of cilantro and other stronger flavors coming through, and I wouldn’t say it’s spicy. It would be nice to have a little more sauce in this meal, but it’s not a deal breaker. I thought the rice itself didn’t have much special flavoring to it and tasted a lot like regular basmati rice.

It might be a bit pricey for one serving, but I’d consider buying this again.

Trader Joe’s Chicken Tikka Masala isn’t restaurant quality, but we’ve yet to find grocery store Indian food that really is. However, this is pretty good for a frozen grocery store entrée. If you like Indian food but takeout isn’t in your budget, this might be worth a try.