When I was growing up, margarine and butter substitutes were all the rage, but lately many people have returned to using traditional real butter in their kitchens, especially as we’ve come to learn that butter may not be so unhealthy after all.

Aldi sells several varieties of real butter, including salted and unsalted stick butter, along with Irish stick butter and spreadable Irish butter that are reminiscent of name-brand Kerrygold butter. My family regularly uses all of these.

If you want a spreadable butter option that isn’t imported all the way from Ireland, Aldi sells some of that, too.

Both of these butter options are Regular Buys, which means you can find them at Aldi all year.

My biggest challenge with both of these butters was in breaking the seal and getting the container open for the first time, and we’ve heard from readers who also had trouble opening these containers. There is a lip that hangs over the top edge of the container, and while it looks like that’s what you’re supposed to pull on to open the lid, in reality the lid actually rests above that overhanging plastic lip. I broke part of the plastic overhanging lip trying to figure out how to open the thing. Even after figuring out how to open it, it’s a little annoying to open every time because it’s not easy to get a good grip on the lid. There’s a learning curve to using this butter. 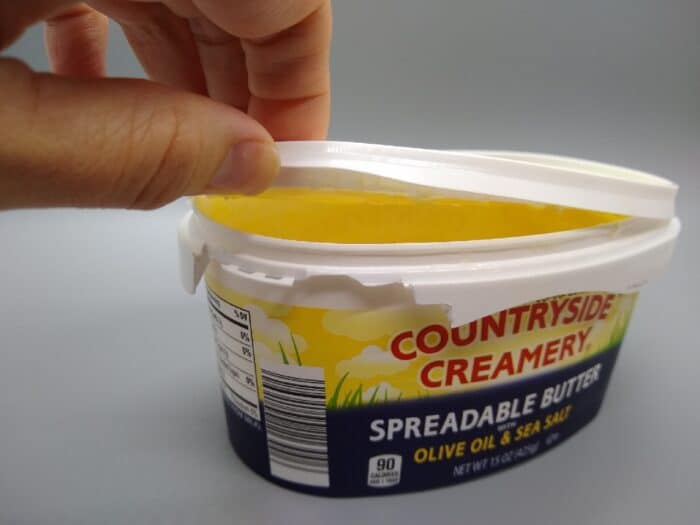 I mangled the container a bit trying to get it open.

Read on for a closer look at the two types of butter.

This butter is a bit different because it also contains olive oil, which is how it achieves a soft, spreadable consistency. 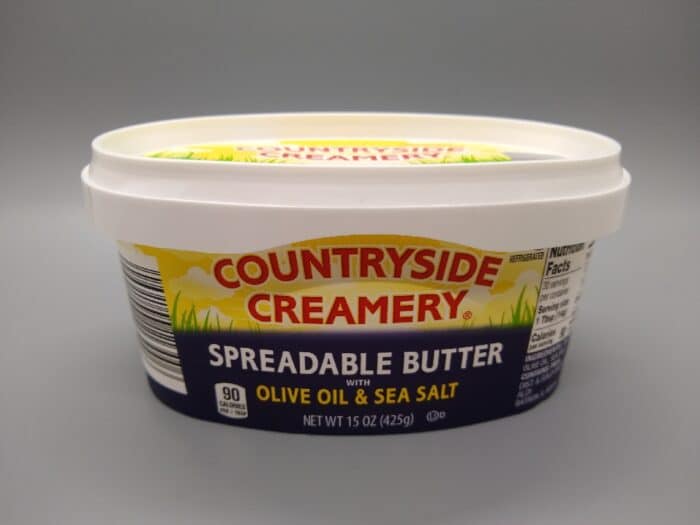 If you are avoiding allergens, this contains milk. 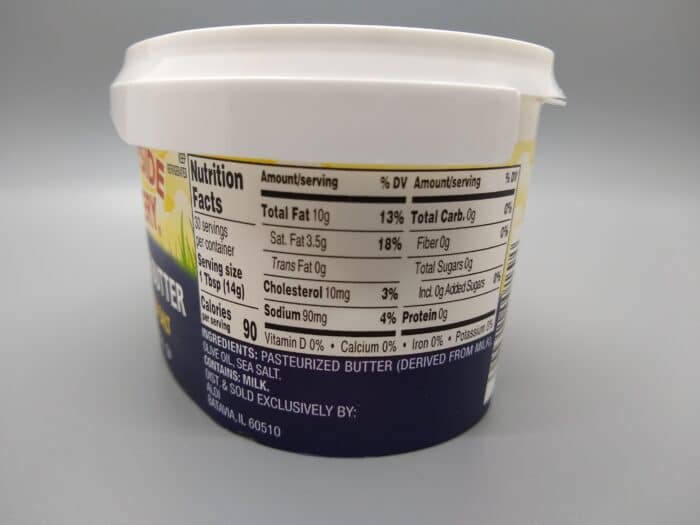 This is softer and more spreadable than Aldi’s Countryside Creamery Spreadable Irish Butter, but this has a very different and distinct taste due to the olive oil. It’s less sweet than traditional butter and tastes more like oil than butter, and some of my family members don’t care for it. If you don’t mind the taste, though, it’s a very easy butter to spread on your toast or muffins.

Some people prefer to cook with butter mixed with olive oil because they claim the mixture has a higher smoke point than regular butter, but that may not be the case.

I probably won’t buy this butter again anytime soon, mostly because my family doesn’t care for the taste as much, but also because the container is not the most user friendly. For the foreseeable future, when I want spreadable butter I’ll probably stick with Aldi’s Countryside Creamery Spreadable Irish Butter even though it’s not quite as soft. 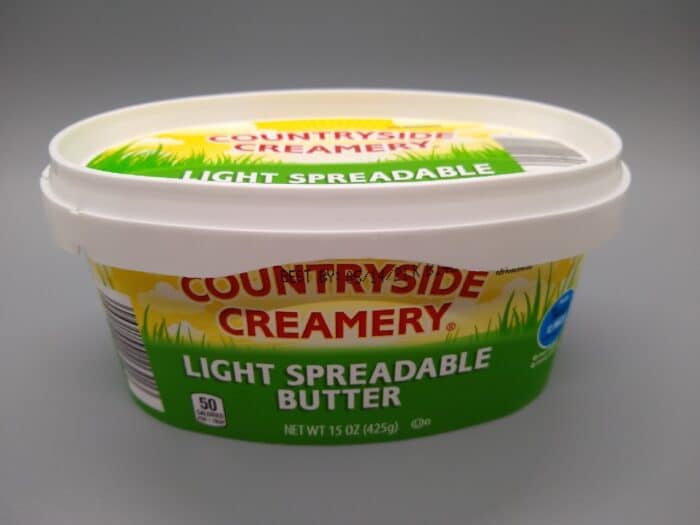 This tastes like what you would expect butter to taste like, but perhaps not as sweet as some butters. 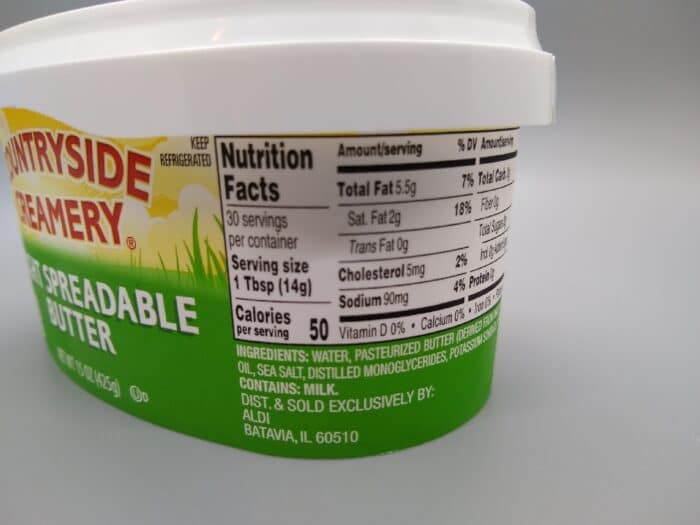 This butter’s ingredients list isn’t as simple. To define a few terms, distilled monoglycerides are emulsifiers that help oil and water to blend. Potassium sorbate is a preservative, and annatto is a natural food coloring. 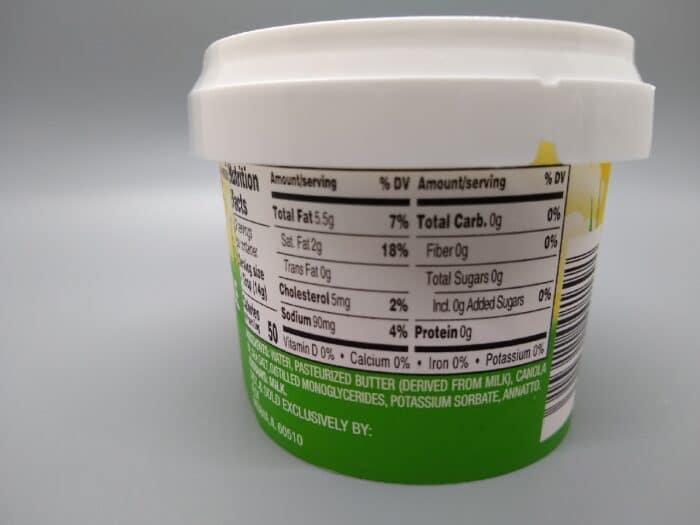 This butter has almost half the calories of the spreadable butter with olive oil listed above, so it is a light butter. The tradeoff may be in the fact that it contains other ingredients such as preservatives and emulsifiers. That’s a choice you’ll have to make for yourself.

In terms of spreadability, this is very soft and easy to slather on your toast or on a roll. My family also likes the taste of this butter better. It doesn’t have the olive oil flavor like the butter above, so if you want spreadable butter that just tastes like butter, this is it.

Countryside Creamery Spreadable Butter with Olive Oil & Sea Salt and Countryside Creamery Light Spreadable Butter are easy to spread on whatever you want to spread them on, although it’s not so easy to open the containers. The butter with olive oil has, not surprisingly, more of an oily flavor and less of a traditional sweet butter flavor, so it might be an acquired taste. The light butter tastes fine but contains a few extra ingredients such as preservatives.