Skip to content
Home Features When is German Week at Aldi?

When is German Week at Aldi? 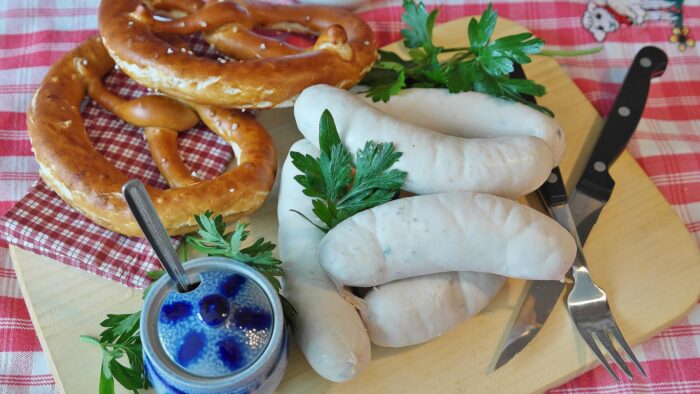 Aldi has its origins in Germany. Anna Albrecht started a small grocery store in 1913 in Essen, Germany. In 1946, after World War II, Anna’s sons Theo and Karl took over management of the store. In the early 1960s, the brothers decided to divide the company when they couldn’t agree on whether to sell tobacco products. They created two companies with variations on the name Aldi, which is short for Albrecht Diskont, or Albrecht Discount. Aldi Nord operates out of northern Germany and runs Trader Joe’s stores in the U.S., while Aldi Sud is based out of southern Germany and operates Aldi stores in the U.S.

Given Aldi’s history, it makes sense that we spot German foods or German-inspired foods in Aldi stores from time to time. Some of our favorites include:

Most of the German food at Aldi is sold under the store’s Deutsche Küche private label. This label is only available at Aldi and no where else, so if you can’t find a Deutsche Küche product at your local store, you’re out of luck for the time being, at least until the next German week at Aldi.

When Does Aldi Sell German Food?

The catch is that these German foods are not in stock at Aldi all the time. This is part of Aldi’s strategy as a small inventory grocer. The store stocks certain staples such as dairy, meat, produce, canned goods, and baking supplies year round. Then, to fill out the store’s inventory, Aldi rotates other products onto its shelves for limited periods. This means you are likely to see Mexican food around Cinco de Mayo, apple cider and pumpkin cake rolls during the fall, and turkeys and hams during the winter holidays.

But what about German food? Is there a certain time of year when Aldi usually sells its German food?

We aren’t Aldi, so we can’t make any guarantees and things could change, but in our experience Aldi typically sells its German products during two different times of the year. First in the spring, and later again in the fall.

During the springtime, German foods usually show up in April or May, but the exact date fluctuates. In 2022, it fell on first week of May. Your best bet is to keep an eye on the weekly Aldi ads.

Remember that most of the Deutsche Küche products — with the exception of a limited few items such as some canned soups — at Aldi are Aldi Finds, which means they’re only in stores for a short time. Each store gets one shipment, and after that sells out, those German products are gone until the next German week at Aldi. Also keep in mind that Aldi does not offer online ordering for foods that aren’t currently in stock in your local store.

So if you have a craving for pretzels, schnitzel, or peanut puffs, be sure to stop in at your local Aldi in the spring and in the fall. Stock up so you have plenty of goodies to last you for a few months until German week rolls around again.