Navigating the holidays may not be easy if you eat a vegan diet. It’s a time when ham, turkey, duck, and other animal products take center stage. If you prefer to eat vegan, Aldi has been a good grocery store to shop at for several years, with quite a few options for people who do not eat meat or other animal products. We’ve seen Aldi offer all sorts of vegan-friendly options ranging from mac and cheese, meatless meatballs, cheese sticks, dessert bars (some of our favorites), ice cream sandwiches, potstickers, beefless crumbles, chickenless patties, and southwest-style bean burgers.

With Thanksgiving quickly approaching, I spotted another vegan option at Aldi recently: plant-based turkey breast. It’s not actual turkey breast, of course, and instead is soy based and also contains pea protein isolate. I picked up a box to try. 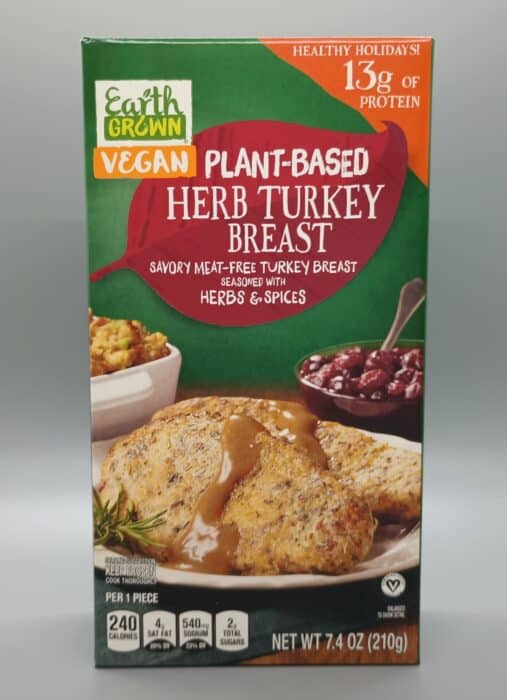 Earth Grown Vegan Plant-Based Herb Turkey Breast cost $4.99 for a 7.4-ounce package at the time of publication. With two servings per box, that comes out to about $2.50 per serving or 67 cents per ounce. The box describes this as “savory meat-free turkey breast seasoned with herbs & spices.” It is a product of the Netherlands, is sold frozen, and is certified vegan. This was sold alongside a similar “oven-roasted” plant-based turkey breast as well.

This is an Aldi Find, which means it’s only in stores for a short time. Each store gets one shipment, and after that sells out, they’re gone until next year, if Aldi decides to bring them back next year. Aldi does not offer online ordering for products that are not in stock at your local store.

As is often the case with vegan processed foods, this contains some gums and other processed ingredients such as dextrose.

If you’re watching out for allergens, this contains wheat and soy. 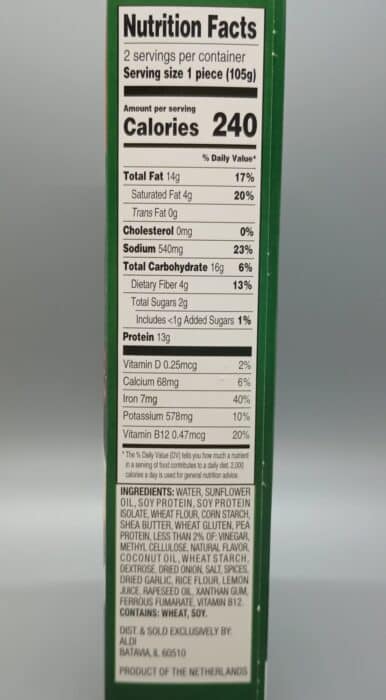 The back of the box has instructions for heating this in a frying pan, oven, or microwave. Preparations are based on thawed product. This should be thawed in the refrigerator prior to heating, and it should be used within 72 hours after thawing. It should be cooked to an internal temperature of at least 165 degrees before serving.

To pan fry, heat in a skillet for 6-8 minutes on medium heat. Turn every now and then.

To bake in the oven, place on a baking sheet and bake for 10 minutes at 365 degrees. Turn once.

To microwave, heat on a microwave-safe plate at 600W for 3 minutes. 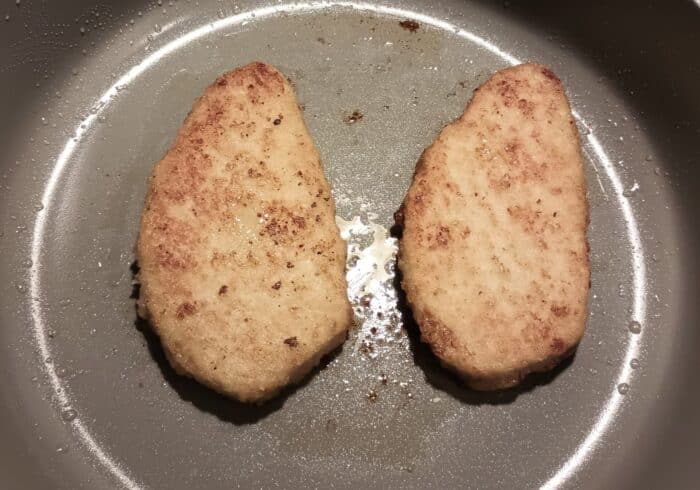 Almost done heating in the skillet. I didn’t add any cooking oil or nonstick spray, but these do give off some oil as they heat. It might look like this splattered as it cooked, but it really didn’t.

I chose to heat this in my Aldi Crofton Awesome Pan on the stovetop. I didn’t use olive oil or any type of nonstick spray in the skillet because the directions didn’t mention to do so, and I wanted to see how well following the exact directions would work. There was minimal sticking, and the food gives off a little oil or grease as it cooks, helping to naturally keep things from sticking. The small amount of brown residue left in the skillet after heating washed off easily with a little scrubbing with a dishcloth. 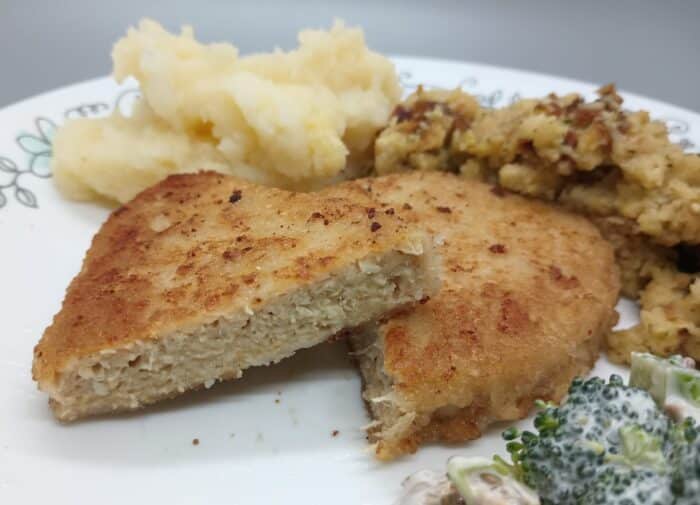 A Thanksgiving feast with one meatless turkey patty, mashed potatoes, brioche stuffing, and broccoli salad made with all-Aldi ingredients.

The box contains two decent-sized patties, and one patty is a lot if you’re serving this with other side dishes. I ended up eating about half or a little more than half of one patty. The stovetop directions say to heat these for 6-8 minutes, and I heated them for the full 8 minutes. They developed a nice brown, slightly crisp crust on the outside and were tender on the inside. If you don’t want as much browning, just heat these for less time, or microwave them.

My family all thought this tasted more like chicken than turkey, but we all agreed it was pretty good and has a meat-like texture. In terms of texture and taste, it reminds me a little of a chicken patty I might eat as a sandwich on a hamburger bun. It’s savory and flavorful. Some of us thought this had a very slight aftertaste that was a giveaway that it’s not real meat, while other people in the family didn’t notice any kind of aftertaste. Some of us also thought it had a very faint sweet taste to it as well, but we didn’t all agree on that aspect either.

This tastes good on its own, and it’s also great when served with traditional holiday sides such as mashed potatoes and stuffing, which is how I served it.

Earth Grown Vegan Plant-Based Herb Turkey Breast is made with soy protein, soy protein isolate, and pea protein. It’s sold frozen and heats easily on the stovetop or in the oven or microwave. We liked how this tasted, although we thought it tasted more like chicken than turkey. It’s good as is, and it also makes a nice full meal when paired with Thanksgiving sides such as mashed potatoes, stuffing, cranberry sauce, and rolls. If you eat a vegan diet, this is a tasty option.