Aldi is on top of popular diets such as keto, gluten free, and especially vegan. The grocer sells an entire line of vegan products, with some of them in stores year round and others rotating in for short periods throughout the year. Vegan products I’ve spotted at Aldi during the past couple of years include beefless crumbles, a variety of burger patties, coconut milk ice cream, meatless meatballs, and vegetable potstickers.

One of the most recent vegan items to show up on store shelves was vegan macaroni and cheese. 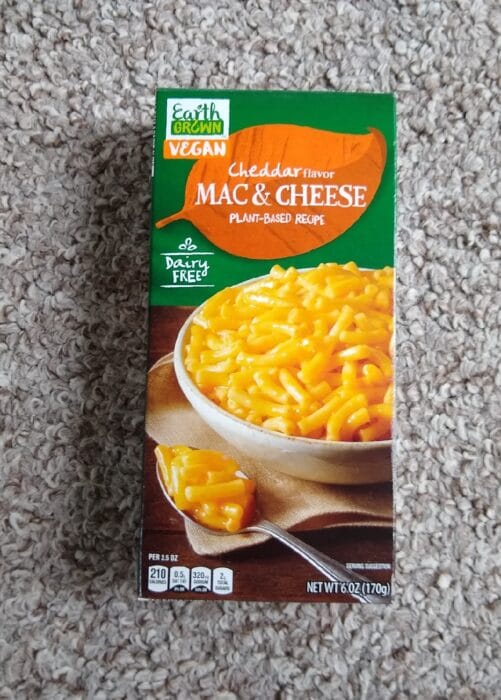 This is an Aldi Find (Special Buy). That means it’s only in stores for a short time, so if you miss it this time, you’ll have to wait until the next time it comes around, and we don’t know exactly when that might be.

The box says this is a plant-based recipe that is dairy free (hence, vegan).

The first several ingredients include enriched macaroni, maltodextrin, organic palm oil powder, salt, and cane sugar. Like many vegan foods, this does have some processed ingredients.

If you’re looking out for allergens, this contains wheat. 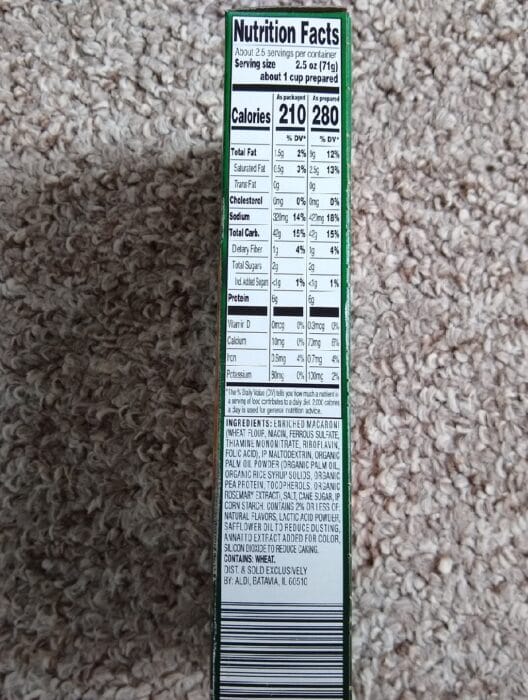 To prepare this mac and cheese, boil six cups of water. Stir in the pasta and boil for 7-10 minutes or to desired tenderness, stirring occasionally. Drain, and do not rinse. Return pasta to the pot and add 1/2 cup of unflavored almond milk and 2 tablespoons of plant-based buttery spread. Add the contents of the seasoning packet. Mix well until smooth and creamy.

Because my family does not eat a strictly vegan diet, I prepared this with regular whole milk and butter.

My family noticed the seasoning/cheese powder is a brighter orange color than a lot of other boxed mac and cheese dinners we’ve prepared, but once the powder was stirred in, it looked like standard store-bought mac and cheese.

As for how it tastes, I thought it was okay. Some family members really liked it and asked for seconds. Another family member thought it had a slight aftertaste, but the rest of us didn’t notice, or it wasn’t enough to be an issue for us. Half of us thought this was a more mild or bland-tasting macaroni and cheese without as much cheese flavor as non-vegan varieties we’ve eaten, but it wasn’t bad, and it can always be doctored with salt and pepper, extra cheese, or a cheese substitute if you’re trying to keep it vegan.

Overall, if eating vegan is important to you, this is a decent boxed mac and cheese.

Earth Grown Mac & Cheese is lower in calories and sodium than a lot of other traditional boxed macaroni and cheeses we’ve tried, and while its flavor is more on the mild side and not the cheesiest, it’s not a bad option if you’re looking for an easy vegan lunch.