One of the more recent seafood offerings I spotted at Aldi was a seafood boil with Cajun seasoning. Seafood boils are popular in coastal areas, including Louisiana, Georgia, South Carolina, Chesapeake Bay, and throughout New England. Ingredients, seasonings, and cooking styles can vary by region. Because this seafood boil from Aldi features Cajun seasoning, it’s a nod to Louisiana. 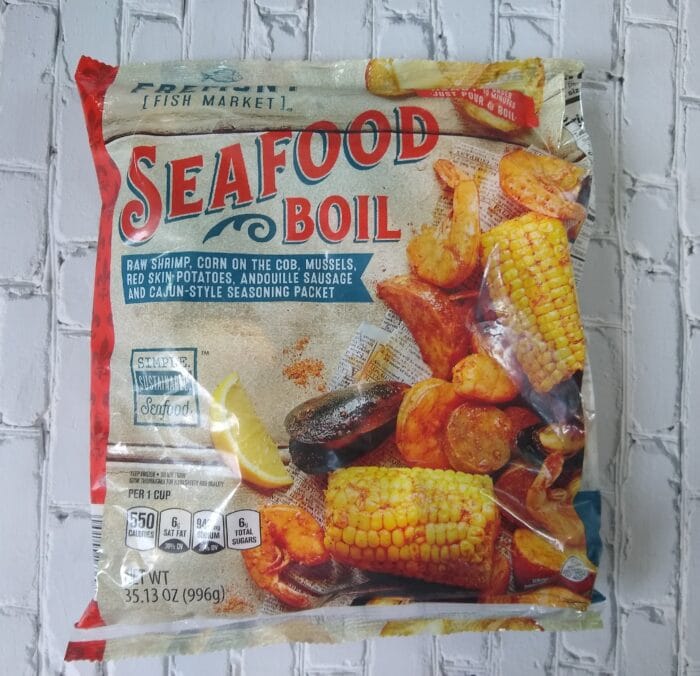 The Fremont Fish Market Seafood Boil cost $9.99 for a 35.13-ounce bag at the time of publication.

This is an Aldi Find, which means it’s only in stores for a short time. It’s exclusive to Aldi, and Aldi does not offer online ordering for its specials, so once this sells out at your local store, that’s it until next year.

The package describes this as “raw shrimp, corn on the cob, mussels, red skin potatoes, andouille sausage and Cajun-style seasoning packet.” It’s a product of the U.S., and the seafood in it was farm raised.

If you’re avoiding allergens, this contains shrimp, mussels, and milk. 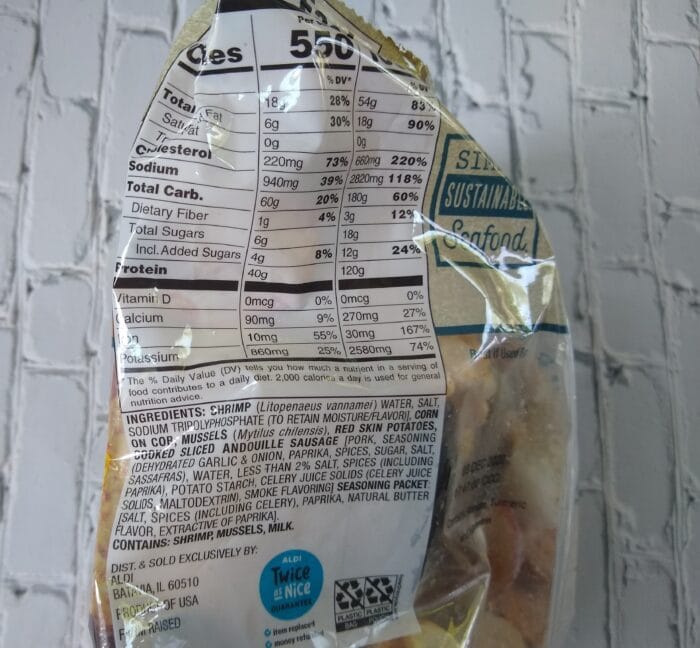 This seafood boil is prepared on the stove top, and the process is simple. In a 4-quart pot, add 2 quarts of water and bring to a boil. Set aside the seasoning packet. Slowly empty the contents of the bag into the pot of boiling water. Add 3/4 of the seasoning packet into the pot of boiling water and set aside the remaining seasoning. Cook for 5-6 minutes or until a temperature of 160 degrees Fahrenheit is reached. Drain the product into a colander. If desired, add the remaining seasoning.

After boiling, ready to serve. This meal had plenty of shrimp and sausage, enough mussels to make it interesting, a few potatoes, and two half-ears of corn.

The front of the bag proclaims this meal is ready in 10 minutes, and that all you have to do is pour and boil. In reality, it takes a little longer because you have to allow time for the big pot of water to boil before cooking the seafood for 5-6 minutes. I didn’t strictly track time, but this meal was ready within probably 15-20 minutes, and it’s very easy to make.

I did as the package instructed and poured about 3/4 of the seasoning packet in with the food while it all cooked. Then I drained the water and my husband and I tasted a potato to determine if we wanted to use more seasoning. It tasted pretty good, and I probably should have stopped there, but I sprinkled a little more seasoning on for good measure and because I was curious. It ended up making things a little more spicy but also a lot more salty (especially the potatoes and sausage), so I recommend not adding additional seasoning after cooking and draining, unless you like very salty food. We also noticed that the seasoning I added after cooking left a granular coating over everything, while the seasoning that was used during the cooking process dissolved nicely to add overall flavor.

Ultimately, my husband and I, along with one pickier eater in our family, liked this seafood boil. The picky eater especially liked the mussels, which surprised me because they don’t exactly look the most appetizing. Go figure. Another family member who doesn’t care for shrimp as much — and who was put off by the mussels — passed on this meal.

This boil had generous amounts of shrimp and sausage, with a decent amount of mussels. I appreciated the fact that it had just the right amount of potatoes and not too many, because I could see how potatoes could easily be used as an inexpensive filler. One minor disappointment was that this package contained only two half ears of corn, which was on the low side considering there are three servings in the bag. Because I was serving this to my family of four, I cut the two pieces of corn each in half, making four quarter pieces of corn, after cooking was done.

Overall, this was a good meal, and I’d buy it again the next time it shows up in the Aldi freezer case.

The Fremont Fish Market Seafood Boil contains frozen shrimp, sausage, mussels, potatoes, and corn. It’s easy to prepare by dumping everything into a pot of boiling water and cooking for a few minutes. It also comes with a Cajun seasoning packet, and you can add seasoning to taste both during the cook time and afterward if you want more flavor. This isn’t too spicy, especially if you don’t use the entire seasoning packet. If you like seafood or Cajun cuisine, this is worth a try.