Shrimp aren’t something we have too often around the house, but they’re tasty when we do. Cold shrimp with cocktail sauce makes for a nice appetizer when having a fancy dinner, while shrimp scampi can make for a mean side to pair with a steak. Aldi sells different kinds of shrimp for different occasions, including some as everyday Regular Buys.

Not long ago, we sighted this interesting take on shrimp in the grocer’s frozen section. 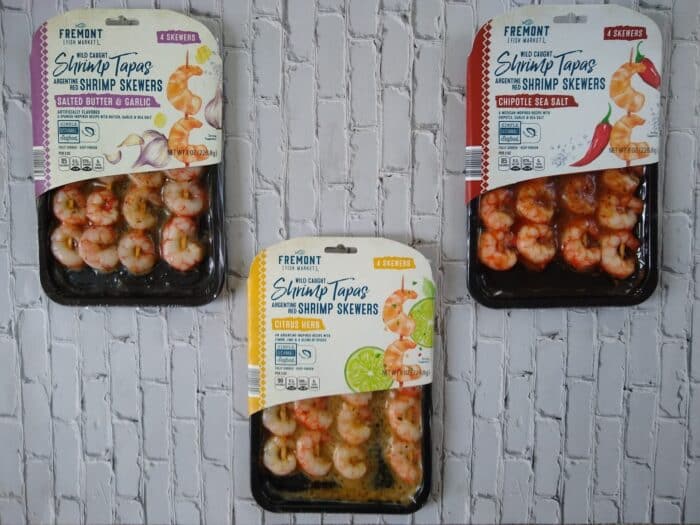 Fremont Fish Market Wild Caught Shrimp Tapas Argentine Red Shrimp Skewers (Product Code: 704786) are a Seasonal Item, which means they are only found in stores during certain times of the year. During that season, stores will restock their supply, but once the season is over, stores will eventually run out. This particular product looks to be a summer item.

There were three versions in our store: 1) salted butter and garlic, 2) citrus herb, and 3) chipotle sea salt. We picked up all three.

All of these packages are a product of Argentina, are wild caught, and were caught in FAO 41 (Atlantic, Antarctic). All were caught by trawler. In terms of allergens, all of these shrimp contain shrimp (obviously), but they also contain soy and milk, and they may contain fish and tree nuts.

The shrimp are full cooked, and heating instructions are identical for all of the versions we tried. These come frozen and can either be heated from frozen or thawed and then heated. To overnight thaw, peel one corner of the film back to allow airflow, then thaw in the refrigerator. To quick thaw, remove the sleeve, then submerge the packaging with film intact in room-temperature water for 15-20 minutes or until fully thawed.

We opted to grill all of the shrimp, thawing them in the refrigerator for a couple of days before cooking.

One issue I had with the instructions was drizzling the sauce after grilling or baking. The sauce is either going to be frozen or cold, which is not helpful when you’re trying to eat hot shrimp. One solution might be to pour the sauce into a small microwave-safe dish and heat it for a few seconds first. 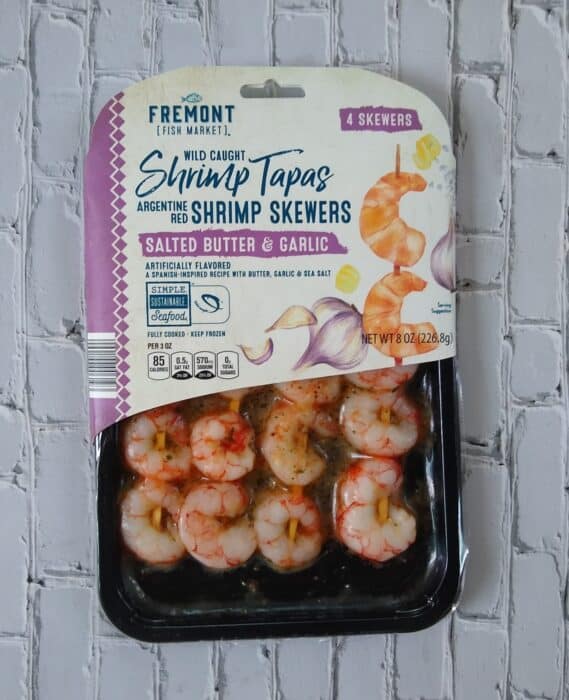 One convenience of these shrimp is that they come pre-cooked, so they only need to be heated up. The film peeled off of these easily enough, and it wasn’t hard to place them on the grill. 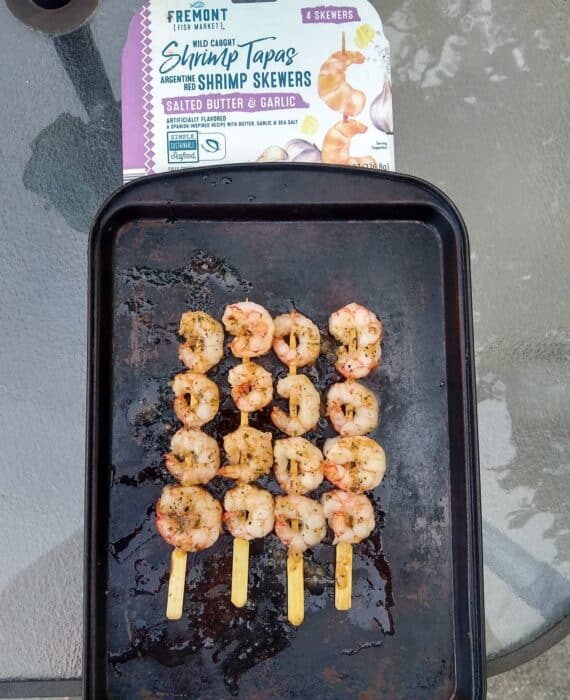 My assumption going in was that these would taste like shrimp scampi, and that’s more or less how they came out. The texture was good, and the taste was good without being too overwhelming. It’s definitely a salted butter and  garlic mix. Most of our testers, especially ones familiar with scampi, liked these. 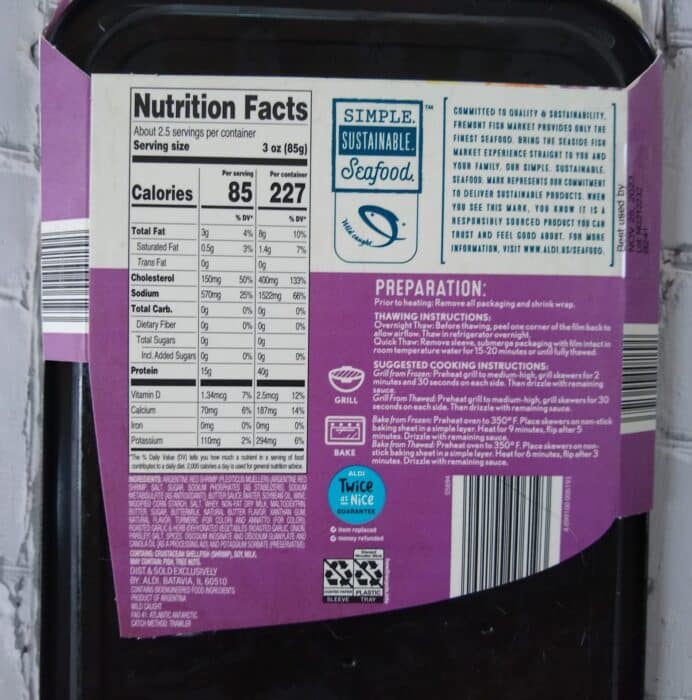 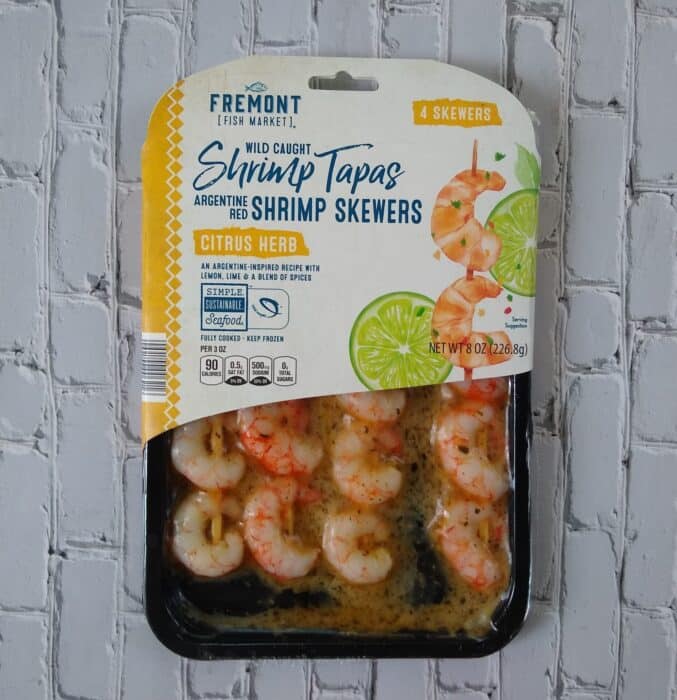 The citrus herb film peeled open the same as the salted butter and garlic, and they went on the grill without trouble. 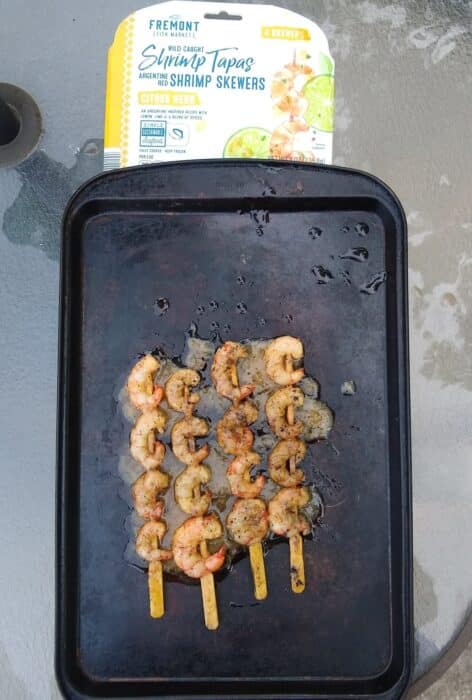 This was probably the consensus favorite among our testers. They have a hint of citrus without being too fruity, and a seasoning of herbs without being too herby. They’re nicely flavored overall, and as with the previous shrimp they had the right texture. 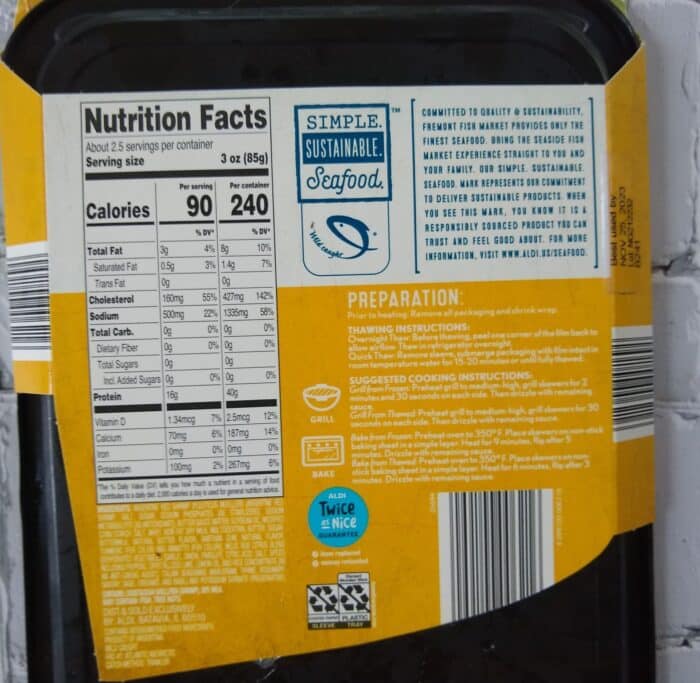 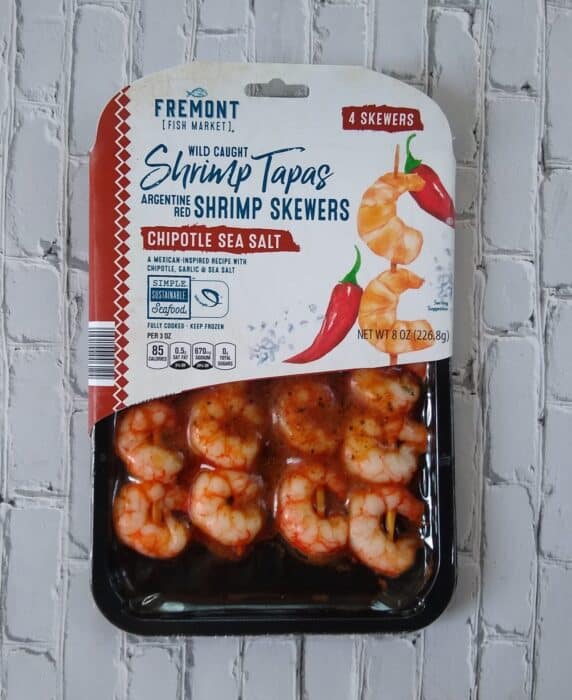 You can tell right away that these are going to be different, at least in terms of the sauce. The film peeled off like the others, and the shrimp went on the grill without problems. 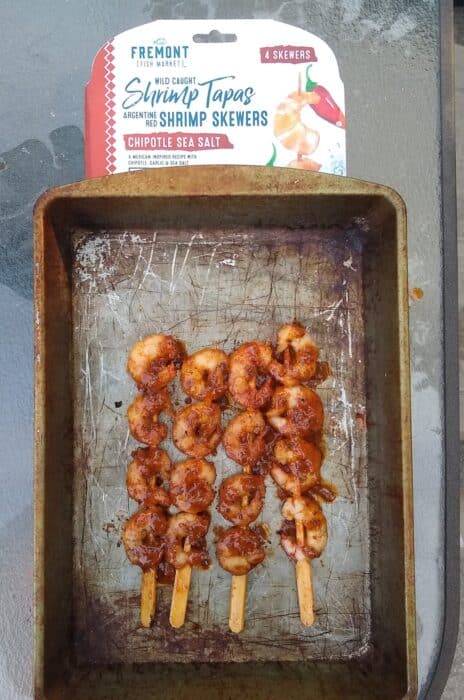 When you hear chipotle, you expect some heat. These shrimp had some heat. We’d peg it around medium. They’re not just raw heat, though: they’ve got a nice flavor that comes in just ahead of the spice. If you’re a fan of both flavor and some kick, these do both. The texture, like with the other shrimp, is good. One of our testers noted that some of the dried spices and seasonings gave this flavor in particular a different, almost gritty, texture. That wasn’t a deal breaker, though. 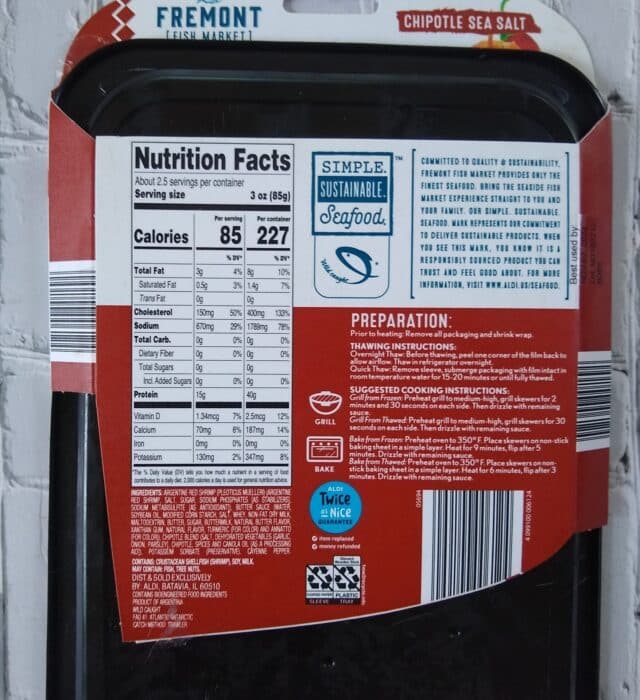 Fremont Fish Market Wild Caught Shrimp Tapas Argentine Red Shrimp Skewers are an easy way to get shrimp skewers. They cook up without much trouble and taste pretty good. At $7 per pack, these feel more like an indulgence than a practical food, but they might be worth taking a flyer on if you’re a shrimp fan.