EDITOR’S NOTE (June 2017): After this post ran, a friend of ours decided to try grilling a pizza himself. You can read what happened right here.

Most people assume that frozen pizzas are meant to be baked. That is almost always true. However, at least one brand, Jack’s Pizza, likes to boast that its products are great for grilling, and there is a small niche of grilling enthusiasts who will sometimes toss their Tombstone on a grill to give it a different flavor. I’ve experimented some with Jack’s Pizzas on the grill over the years, and while the taste is interesting, it’s hard to grill them without burning the bottom.

That didn’t stop me from getting a little experimental recently with a Mama Cozzi’s from Aldi. 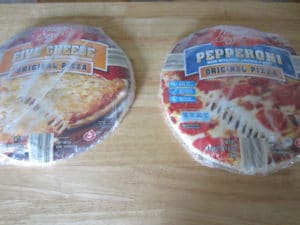 Baking two served two purposes: 1) to compare how the two came out and 2) to make sure the family had something to eat in the event that the grill experiment went really badly.

On her end, it was pretty simple. Preheat the oven to 400, bake for 16-18 minutes. She used a pizza crisper to help give the crust a reasonable amount of crispiness.

On my end, things were a bit more complicated. Jack’s grilling instructions call for grilling the pizza about 25 degrees lower than it would normally bake, and also include rotating the pizza 180 degrees 7 minutes through the cooking process — about halfway, give or take. I decided to follow a similar route with the Mama Cozzi’s; I wanted to make sure the pizza was cooked properly, but I wanted to also try to avoid burning the crust if I could. (Some grillers suggest rotating the pizza 90 degrees instead of 180; in my experience it doesn’t seem to make a lot of difference.)

Because the Mama Cozzi’s Original Pizza is a thicker crust than a Jack’s Pizza, I had no idea how that was going to impact how it turned out. Since Mama Cozzi’s Original Five Cheese Pizza calls for baking the pizza at 400 degrees for 14-16 minutes, I preheated my Weber gas grill to about 375 degrees and tossed the pizza on. (I kept track of the time with the timer on my Crofton Digital Meat Thermometer.) 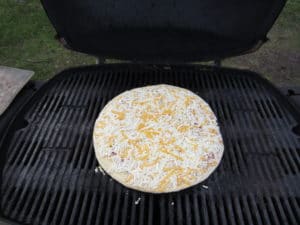 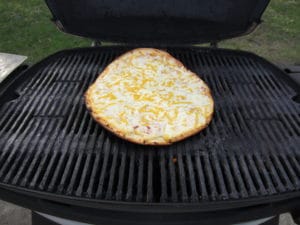 It looked done to me, so I pulled it off the grill. 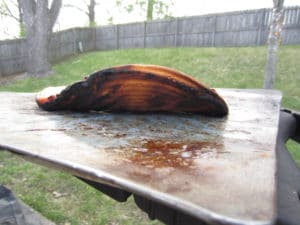 Taking it in, I cut it up and placed it alongside the pepperoni pizza we’d baked in the oven. 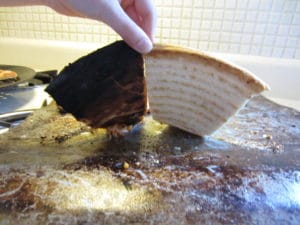 As you can see, the grilled pizza cooked up much more, well, toasted than the oven pizza. Not really a surprise for me, since this has been the outcome with my previous grilled pizza experiments … although, again, I wasn’t sure how the thicker Cozzi crust would fare. Some of the pieces were, like this one, more or less burnt, while other pieces were just darkly toasted. The grilled pizza was noticeably crisper than the oven pizza and the pieces that weren’t burnt had a unique (and, in my opinion, cool) grilled taste.

If a crisp crust and a grilled flavor is your goal, the grill certainly has great potential. The biggest challenge for cooking the pizza on the grill is managing the crust, which can easily burn on the grill, even if you rotate it. Using some sort of surface between the pizza and the grates might help, as might using a charcoal grill and cooking the pizza over indirect heat away from the coals. Should we try again, we’ll let you know!

Have you successfully grilled a pizza, Mama Cozzi’s or otherwise? Do you have thoughts on how to grill one? Feel free to sound off in the comments.