My children (ages 8 and 10) claim that I am fireproof. Or at least that my taste buds are. I can dive into a hot bowl of soup and happily slurp away while they’re melodramatically blowing on spoons and pretending to be injured by the rising steam. This “fireproof” quality also extends to spicy food: I love it and can tolerate it well, while they like it if they’re in the right mood and have a glass of milk nearby. 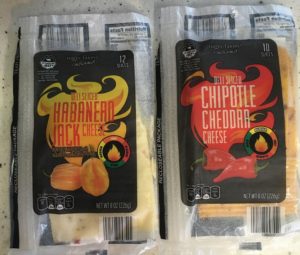 The first one I tried was the Habanero Jack Cheese. The attractive packaging tells you that this cheese is rated “hot” and that it contains habanero and jalapeño peppers, though the cover art only shows habaneros to emphasize the trendier pepper. Each 8-ounce package contains 12 thin slices with 70 calories, 6 grams of fat, and 5 grams of protein per serving.

Habanero peppers are something I had barely heard of before moving to Texas in 2001. There I discovered them in a restaurant when I doused a plate of fried potatoes with what I thought was green Tabasco sauce … and it turned out to be green habanero sauce. It was the difference between taking a hot shower and pouring boiling water on my head. I might have cried out in pain, right there in the restaurant. I’ve liked that sauce ever since, but I learned to use it sparingly.

Habaneros aren’t the hottest pepper out there, but they’re a far cry from their milder jalapeño cousins. If used properly, they lend a nice heat and pleasant flavor to a variety of foods. They’re especially good with fatty foods like cheese because the fat helps temper the acidic heat.

I started with the habanero cheese because I assumed the chipotle version would be too mild and “boring” for my taste. I tried the cheese on its own before putting it on a sandwich, and I braced myself for heat.

Nothing. No strong habanero flavor and not a very strong jack cheese flavor either. I tried another piece in case the first one was a dud, and again, I was struck by how little flavor it had. Yes, you can taste a few pepper bits hiding in there, but they’re used so sparingly and mixed with such a remarkably bland cheese, the flavor can best be described as “meh.”

A more sensitive palate than mine might describe these as “mild” or even “medium,” but I can’t imagine anyone calling them “hot” unless they’d never had anything remotely spicy in their lives.

Next, I reluctantly bought the Chipotle Cheddar just so I could confirm that these “spicy” cheeses were duds.

Aldi has been partying like it’s 2005 by rolling out a number of chipotle-flavored products, from salad dressings to salmon patties and even canned chipotles themselves (which are delicious blended into homemade barbecue sauce, by the way.) I often roll my eyes at chipotle-flavored items because they were so ubiquitous in the mid-2000s and they often lack the true depth and smokiness of a real chipotle pepper.

So imagine my surprise when I found myself really liking this cheese. Really liking it, as in “breaking my diet to eat an extra piece” liking it. Is it especially spicy? Not really. I’d describe it as mild (the package says “medium.” Huh.) This package is also 8 ounces but only has 10 slices, so they’re thicker than the habanero variety. Each slice has 90 calories, 7 grams of fat, and 5 grams of protein.

But the difference is the cheese itself. This is a nice, flavorful cheddar instead of a so-bland-it-could-be-plastic jack cheese. And the chipotle peppers’ smoky undertones really come through. If you like smoked cheddar cheese but want something a little different, you’ll love this. I’ve had it on sandwiches, on crackers with salami, melted over potatoes — and it’s consistently good.

This cheese won’t make you cry out in pain, but spicy food doesn’t have to be heart-attack inducing to be delightful. It just has to taste better than plastic.