Aldi is in a state of constant change. In recent years, it has expanded its store count, remodeled its existing stores, revamped its food lineup, and increased its offerings. We’ve seen Aldi tweak products across the board, from simple label changes to wholesale product reinventions.

There’s a good chance, however, that you might have missed one little artifact on your local store shelf. Like a time capsule from a bygone era, it sits, waiting for those who need it.

Brookdale Beef Stew is an Aldi-exclusive private label product. You might be forgiven for not being sure, because Brookdale isn’t an Aldi brand we see much of. In fact, this is the only product with this label that we’ve seen.

It’s been around for a while. I found a prepper board where someone unearthed a can from 2011 and tried it out in 2016. The can he showcased looked awfully similar to the one I currently hold on my end. The nutrition label and Aldi product guarantee are updated, but the main product image and title look about the same.

The stew is a Regular Buy, meaning you can find it in stores all the time. It comes in a 20-ounce can and runs $1.69. It has an expiration date stamped on the bottom: mine indicated about 3 years from the time of purchase.

It can be made on the stove top or in the microwave, pretty much like any other canned soup you’ve had. To cook on the stove top, you empty the stew into a saucepan, then heat to simmering over medium heat, stirring occasionally. To cook in the microwave, you empty the stew into a microwave-safe bowl, then cover loosely and cook on high heat for 3-4 minutes or until hot, stirring after 2 minutes and again before serving.

My family tried it out, and most of them thought it was okay. It’s your standard processed food, so it doesn’t replace a homemade stew, but as far as canned stews go it’s not bad.

Like most canned foods, this has a few health flags, chief among them sodium. The entire can contains over 100% of your recommended daily allowance of sodium, and over half of your recommended saturated fat intake. It’s sustenance, but not one you’d want to report to your doctor. 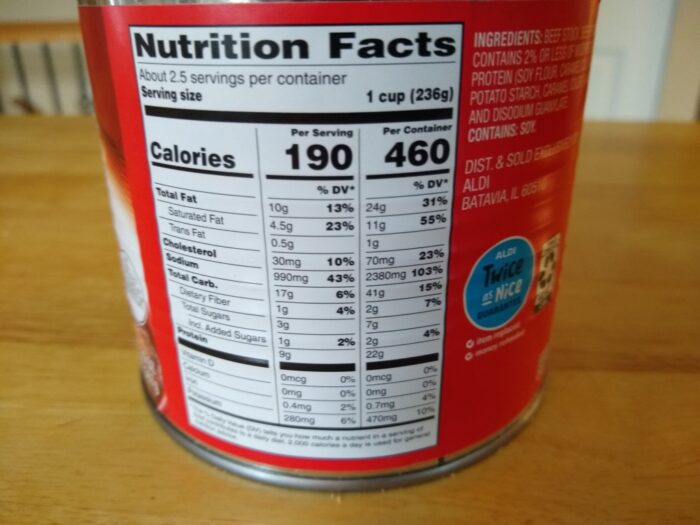 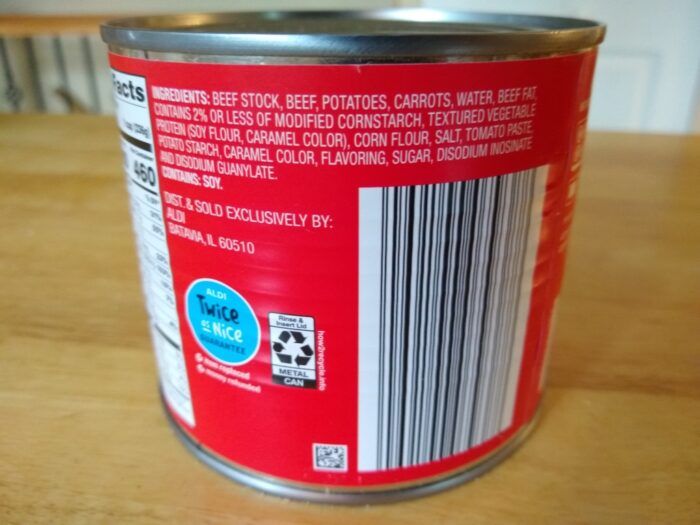 Brookdale Beef Stew is a decent canned stew. It’s processed and high in sodium, but if you’re looking for something you can store in your pantry for emergencies — or if you need a hot stew in a hurry — this stew tastes alright.