How to Navigate Aldi With the New In-Store Limitations 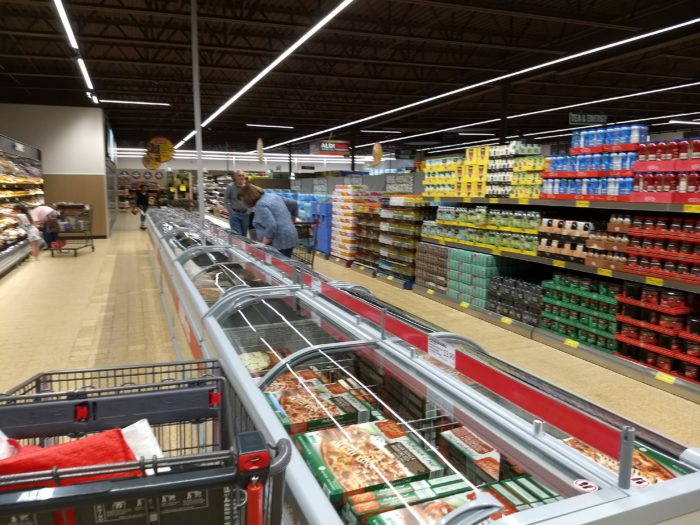 If you’ve been shopping at Aldi for a while, you probably developed a routine. You may have had an aisle you liked to start with (the middle aisle is popular) and you’d drift around from there.

Things have changed. On April 9th, Aldi instituted new limitations on its stores, including how many customers could get in and where they could go. This is on top of other store changes, including expanded hours for older and health-compromised people. We don’t know how long these limitations will be in place.

Nevertheless, people need to shop, and they may not want or be able to use Instacart. For people who still need to physically go to the store, we’ve assembled a few thoughts.

This is true all the time, but it’s especially true now: certain times of day can get pretty busy. At the outset of these limitations, we discovered that store openings could be very busy, and that was before Aldi instituted special hours for vulnerable customers. Your store may be different, but depending on your area, you might want to avoid arriving right at opening. Also, on Tuesdays and Thursdays, the store is now open for vulnerable customers from 8:30 a.m. to 9:30 a.m. Likewise, we’ve found that later in the afternoon and the evening can also be busy.

Right now, we’re looking at doing our shopping a little after opening — say, 10 a.m. — or in the early afternoon — say, 1 p.m. Again, though, your store may be different.

Medical Professionals Get to Jump to the Front of the Line

Aldi has asked that customers come alone, although it has acknowledged that some people can’t do that, because they either have children or because they’re assisting a vulnerable person. Try to come alone if at all possible, but don’t fret if you can’t.

Be Prepared to Wait Outside

Aldi is limiting entry to roughly five customers for every 1,000 square feet. According to Aldi, an average store is about 22,000 square feet, with about 12,000 of that devoted to floor space, so that would indicate about 60 customers at any one time. Based on what Aldi fans are saying on social media, the number of customers allowed in may be different for each store, and we’ve seen reports of anywhere from 10 to 60 customers being allowed in at one time, with the average being more like 30-50. Either way, if there are a lot of customers there, you may have to wait for a little bit to get in.

You May Not Need A Quarter

In an effort to keep speed up and handling of objects down, many stores are having workers hand carts to shoppers as they enter and then collecting them back at the store after a customer has loaded their car and returned the cart. Because of that, you may not need your trusty quarter, although it never hurts to keep one around just in case.

For Best Results, Bring a List Organized by Aisle

One major change is that Aldi is making its aisles one-way. While we don’t think that will keep you from being able to double back to an aisle if you missed something, you’ll save yourself a lot of hassle if you know exactly where to find everything. To do that, we strongly recommend creating a shopping list organized by row.

In addition, we recommend using a handwritten or printed paper list if possible. We think this is wise for a lot of reasons, including the fact that 1) it makes it so you don’t need to touch or handle your phone in-store and 2) you can dispose of the list when you’re done.

You can easily make your own list, but we’ve mocked up two very simple list templates depending on the layout of your store:

You Might Consider Bagging Your Groceries At Your Car

We’re not exactly sure how every store will ultimately handle the bagging area, but there are a couple of good arguments for customers voluntarily bagging their groceries at your car. One reason is that it allows another customer into the store. Another reason is that it gets you into the open air where it may be less germy and easier to practice social distancing. You can get creative about bagging: we like to use laundry baskets, for example, rather than reusable bags that we have to launder or sanitize. Laundry baskets let us pack things up far more quickly, and we can easily disinfect them when we get home.

Do you have any other tips? Let us know in the comments.