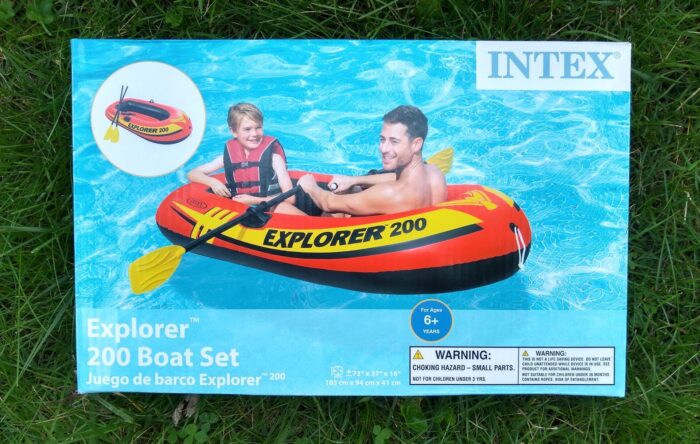 For several years now, I’ve been intrigued by a little product that Aldi stocks on its shelves every summer. It’s a small inflatable boat, an orange thing that looks like it belongs in a swimming pool. Except you don’t have to look far to find out that people have taken this thing everywhere: to distant lakes, out on river rapids, even out an airplane. There is a small cult behind this boat, maybe because people enjoy pushing it past what it would seem designed to do. It doesn’t hurt that the boat in question is cheaper and more portable than your average speedboat, canoe, or kayak.

After all this time, I finally decided it was time to take the plunge.

The Intex Explorer 200 Boat Set is an Aldi Find, which means it’s only in stores for a short time. Once it’s gone, it’s gone, at least until next summer. The box indicates that it’s manufactured by Fujian Co. Ltd. out of China, and is distributed by Steinbach International GmbH out of Austria.

At the time of post, the boat costs $16.99. It goes without saying that this is a fraction of the cost you’d pay for a kayak or canoe, but it’s also a lot less than you’d pay for this exact boat in other places. Right now, the Amazon listing has it close to $60 (or $48 with no oars or air pump). If you really want to try this boat, you’re going to have a hard time doing better than Aldi.

It comes out of the box with the following: 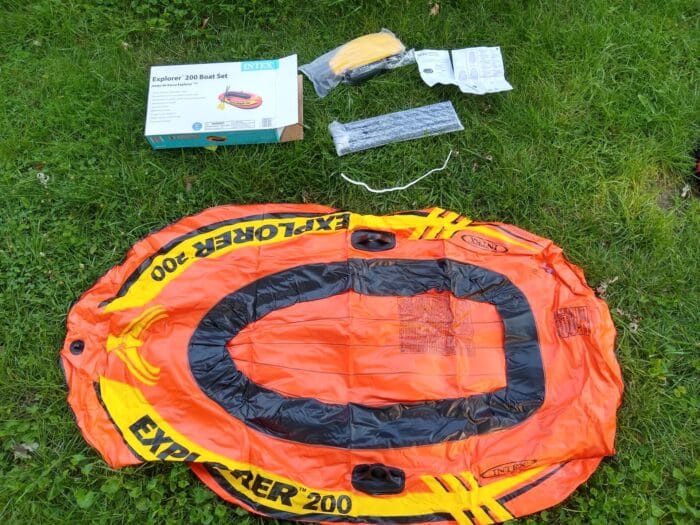 The contents of the box.

The Explorer 200 has a 210-pound weight capacity, and it is designed for ages 6 and up. The boat measures 73 inches x 37 inches x 16 inches, while each oar, fully assembled, measures 48 inches long total, or 4 feet.

The Aldi version of the boat has a 2-year warranty, backed by Intex. 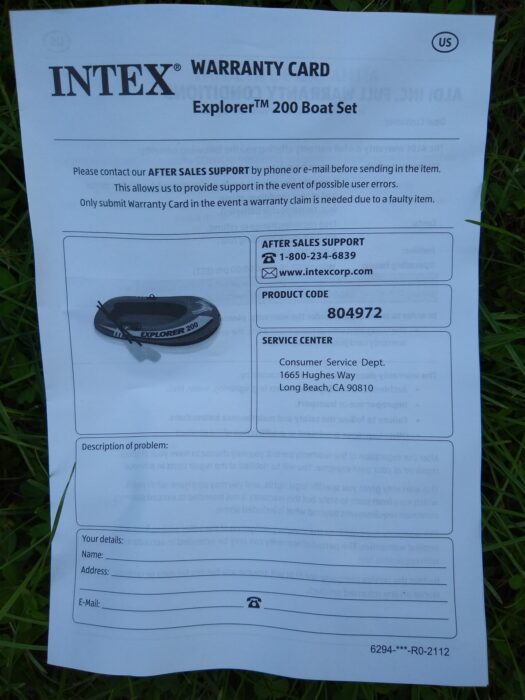 Bear in mind that accidents, unanticipated events, improper use, and failure to follow the instructions are among the exclusions to the warranty. In other words, it covers a manufacturer’s defect, not necessarily damage from use. Also, the fine print notes that shipping and handling are not covered by the warranty. 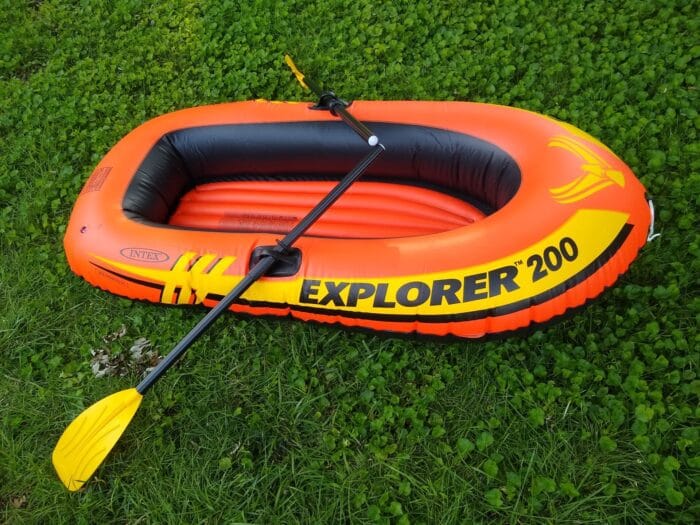 Some assembly is required. I spent some time with it at home first, so I knew what I was doing when I got to a public spot with other people looking on. The instructions are pretty general, but they mostly boil down to inflating the boat and assembling the oars.

The boat has two chambers, helpfully numbered “1” and “2” on the craft. The instructions advise inflating them in that order, which I did. The “1” chamber fills the bottom of the boat where users will be sitting, while the larger “2” chamber fills the main body of the boat. The Aldi version of the boat comes with a nifty hand pump that puts air in the boat both when you push it in and pull it out. Alternatively, you can use an electric pump. The instructions warn against using an air compressor.

I used the included hand pump, which took about 15 minutes to fill from start to finish. It’s not terribly long, but it is a little work, so I brought along a battery-powered Intex pump (courtesy of an old Aldi airbed) in case I needed to add more air later — which I did — and didn’t want to use the hand pump again. The hand pump, though, will work.

Once fully inflated, you can then attach the oars. The oars come disassembled and need to be put together. I found the hardest part to be fitting the oar rings over the oar, but once I was done with that the rest of it came together fine. The oars slide through the oar locks, and the rings then keep the oars from sliding out and falling into the water.

There’s also a small rope you can tie to the bow for pulling it. 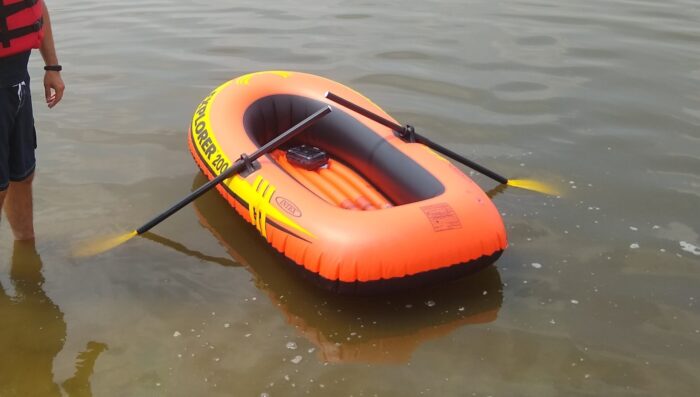 To test it out, I took it to a local man-made lake that features calm waters and prohibits most motor boats. Based on what I’d seen online, some people rowed it forward-facing while others rowed it rear-facing, so I devoted some time to both. Also, because I didn’t totally trust an inflatable boat out in the middle of a lake, I wore a Fluid Life Vest, which was also an Aldi Find.

You can see footage of my attempt later on in this post, but suffice to say that there’s a learning curve. I’m used to a single two-oar paddle on a kayak, not a pair of oars like a rowboat, so it took some time for me to get comfortable rowing. At times I had to stop and reorient myself to go the direction I wanted to. 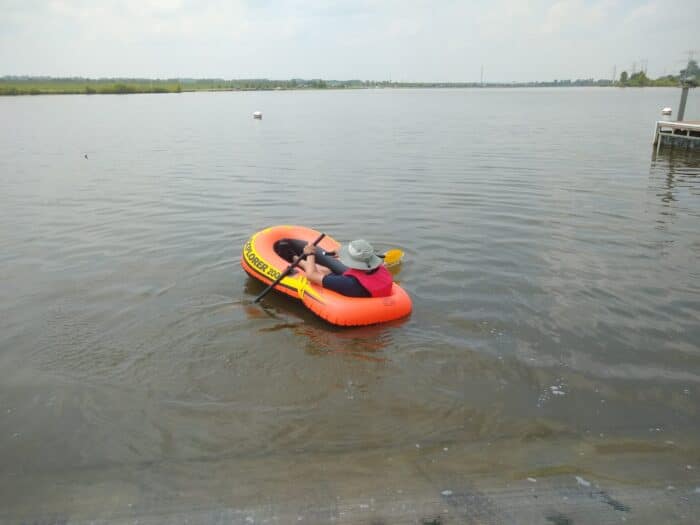 I also found that both positions — forward-facing and rear-facing — had their pros and cons. Forward facing was easier to move and see where I was going, but I had to sit back farther and lower when sitting that direction. Rear facing has the advantage of a better upright position thanks to the boat’s larger bow but is not as helpful when trying to see where you’re going. I’d probably lean toward forward facing in most instances, but rear facing is better if you want a more leisurely day on calm waters. 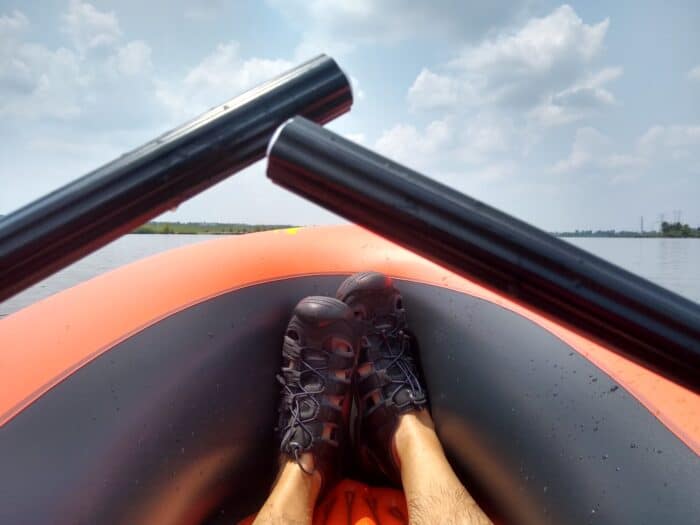 The view from inside in the forward-facing position. (I wore Aldi trekking sandals for this excursion.)

As you might expect, this boat isn’t as quick or nimble as a plastic or metal boat. Even aside from the oars, the boat moves more slowly thanks to its design. It’s as much like a raft as anything. It’s also an adventure getting in and out of, especially if it’s not fully inflated. Even if it is inflated, I found it a little tricky to get in, and very hard to get out without bringing some water into the boat. This is not a boat for someone who doesn’t have good balance and enough upper body strength to prop yourself up as you’re getting out.

Taking it down isn’t difficult. The oars unscrew and come apart without trouble, and deflating the boat is as straightforward as opening the valves and pinching them while gently pushing on the boat to force air out. My one complaint here is that there is no quick-release valve or cap to speed the deflation process. Because there isn’t, I spent as much time pushing air out of the boat as I did putting air in. I ended up just deflating it enough to fit it in the car, then deflated it a little more when I got home.

The Intex Explorer 200 is one of the more unique things I’ve purchased from Aldi. I certainly couldn’t beat the price: for $17 I was able to get a boat large enough for myself, along with an oar set and air pump. I also found it to be relatively easy to set up and get going with. The fact that it’s portable — it can easily fit in the trunk of any car — is another large plus. There’s no crazy extra equipment here.

It’s not for everyone, though. There is a definite learning curve to using it, and because it’s inflatable it’s not as nimble or fast as a standard kayak or canoe. It’s also a chore to get in and (especially) out of. I’m no stranger to watercraft, but I came away from my first excursion feeling like I still had a lot to figure out about it. It’s not as effortless as many other things I’ve floated on.

Here’s the thing, though: even with its challenges, I found it to be more fun than I expected, and as I was leaving I started thinking about other places where I might try it out. I’m not at a place where I’m ready to take it on a river, but I’m looking forward to making another attempt with it. That probably says something.