Aldi has a cult following when it comes to its frozen breaded chicken. The most popular option is the Kirkwood Breaded Chicken Breast Fillets or “red bag” chicken, which pairs well with Aldi brioche buns. Other well-liked frozen chicken selections include Kirkwood Crispy Chicken Strips or “blue bag” chicken, and Kirkwood Honey Battered Chicken Tenders or “yellow bag’ chicken.

There is also “green bag” chicken or Kirkwood Parmesan Herb Encrusted Chicken Tenders. This chicken is a staple in our deep freezer that’s good for times when we need an easy dinner. We published a review of it in the fall of 2020, but then in the spring of 2021 a reader mentioned that the formula for the “green bag” chicken appears to have changed, so we decided to take another look. 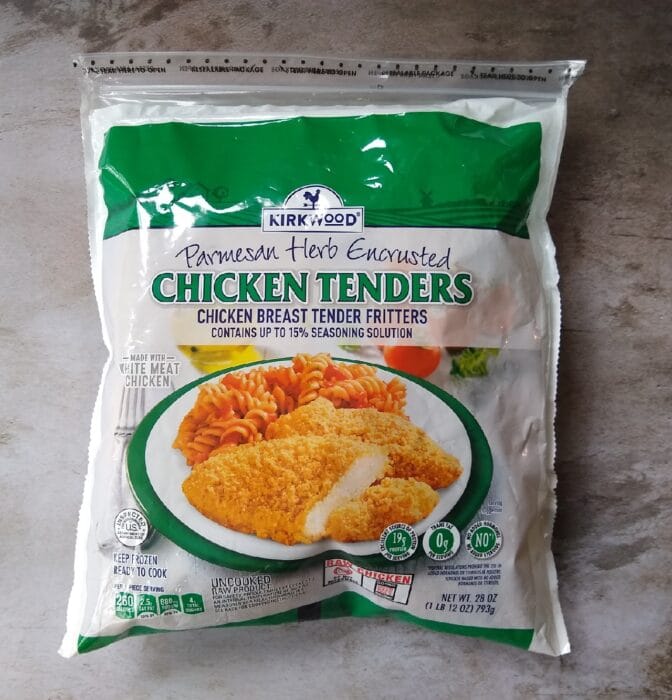 The newly reformulated Kirkwood Parmesan Herb Encrusted Chicken Tenders cost $5.99 for a 28-ounce bag at the time of publication, which is the same price and same-sized package as before.

These are a still a Regular Buy, which means they’re at Aldi all year.

We also noted some nutritional differences, including that the new stuff is slightly higher in calories, fat, saturated fat, and sodium. Here’s a breakdown:

The ingredients have subtle differences, with the new version containing products such as vital wheat gluten.

If you are looking out for allergens, another key difference is that the new version contains milk and wheat, while the old version had milk, wheat, and soy. 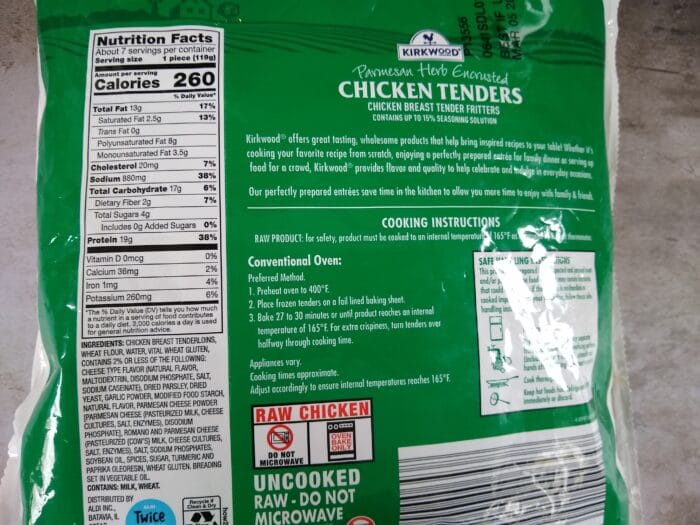 Cooking time is slightly different for this new chicken formula as well. It cooks at a shorter time for a somewhat higher temperature compared to the old version. Cooking instructions are for a conventional oven, and this chicken is sold raw, so you’ll need to be sure to cook it thoroughly before serving.

To cook, preheat the oven to 400 degrees Fahrenheit. Place the frozen tenders on a foil-lined baking sheet. Bake for 27-30 minutes or until the chicken reaches an internal temperature of 165 degrees. For extra crispiness, turn the tenders over halfway through the cooking time. 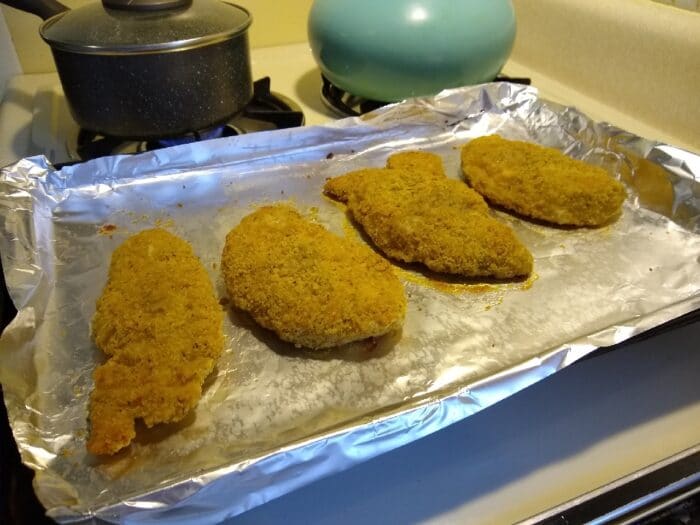 The chicken after baking.

We had six large-ish pieces of chicken in our package (the bag says it contains “about 7 servings,” and you could technically cut the chicken to serve that many, although it might not look as good). I served it alongside some microwavable/steamable frozen broccoli and some pasta salad, all from Aldi. 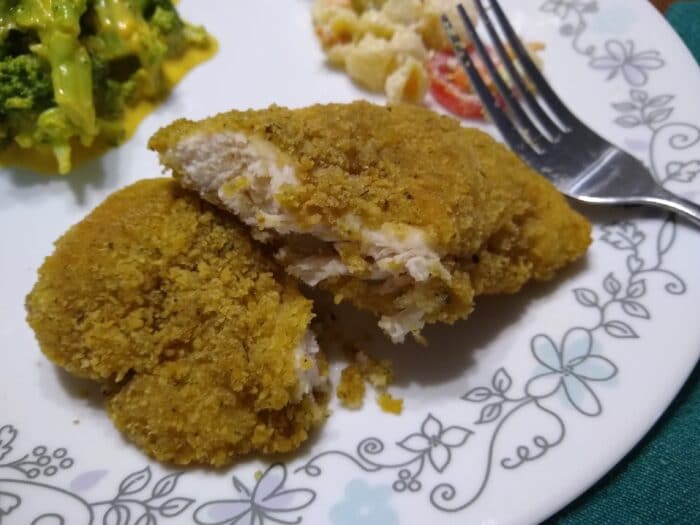 The new chicken served alongside cheesy broccoli and pasta salad.

Besides the larger pieces, this new formula has a thicker and crispier breading, and I don’t think it has as much Parmesan flavor as the old version. It tastes good, though, and my family ate it up. It’s good enough to be served on its own without a dip, but my kids enjoyed it with honey mustard.

Both the old and new versions of this chicken are good in their own ways, and I wouldn’t hesitate to buy the new stuff again.

Kirkwood Parmesan Herb Encrusted Chicken Tenders or “green bag” chicken has recently been reformulated. The chicken pieces are now called fritters, and they are slightly but not significantly higher in calories, fat, saturated fat, and sodium. The pieces are larger, with a thicker breading, and they definitely look and taste different from their predecessor. They taste good in their own way, though.