If you’ve ever eaten at Red Lobster, you know that the Cheddar Bay Biscuits are a memorable part of any meal there. These crumbly, savory biscuits are loaded with cheese, butter, and garlicky flavors, and they can be addictive.

In recent years, if eating out is not in the budget, we’ve been able to get our cheddar biscuit fix with a Red Lobster-branded mix sold at most grocery stores. It’s easy to add water, shredded cheese, butter, and other basic ingredients to the biscuit mix to make your own version of Red Lobster Cheddar Bay Biscuits at home. Then Aldi began selling its own version of knockoff Red Lobster biscuits with its Baker’s Corner Cheddar Herb Biscuit Mix.

For fans who eat a gluten free diet, however, cheddar biscuits of any kind may be off limits. Aldi has a fix for that. In addition to selling the aforementioned regular cheddar biscuit mix, the grocer also sells a special gluten free cheddar cheese biscuit mix under its liveGfree private label, which specializes in offering products that do not contain gluten. 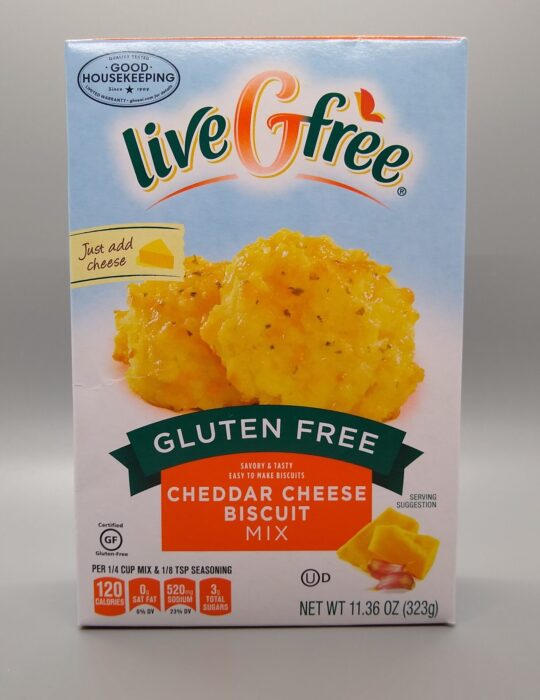 liveGfree Gluten Free Cheddar Cheese Biscuit Mix cost $2.59 for an 11.36-ounce box. This mix is kosher and features the Good Housekeeping seal. It’s a Regular Buy, which means you can find it at Aldi any time of year. It was sold alongside another gluten free mix for cornbread.

Besides being free of gluten, this also contains no wheat, eggs, or soy. 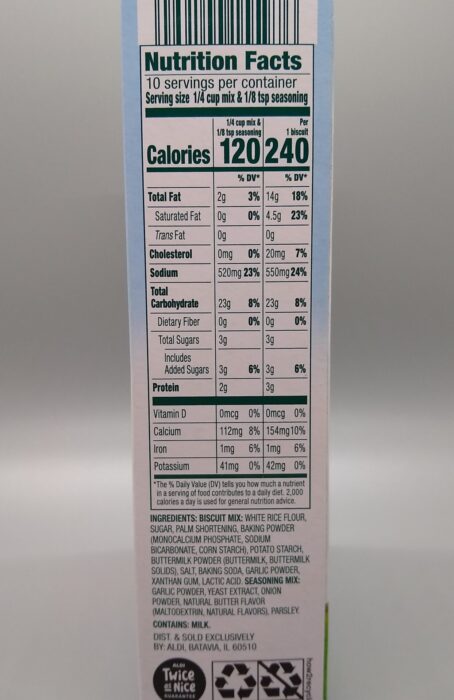 To make the biscuits, preheat the oven to 425 degrees Fahrenheit. Line a baking sheet with parchment paper or spray with nonstick cooking spray.

Stir together 1 cup + 1 tablespoon of water, 4 tablespoons of oil, 1/2 of shredded sharp cheddar cheese, and the biscuit mix until a dough forms. With a large spoon, scoop the dough into 10 portions and place 2 inches apart on the baking sheet. Bake 15-17 minutes or until golden brown on top.

Melt 1/4 cup (half a stick) of butter in a microwave-safe bowl, add the garlic herb mix packet, and stir until well blended. Brush the garlic butter sauce over each hot biscuit and serve immediately. 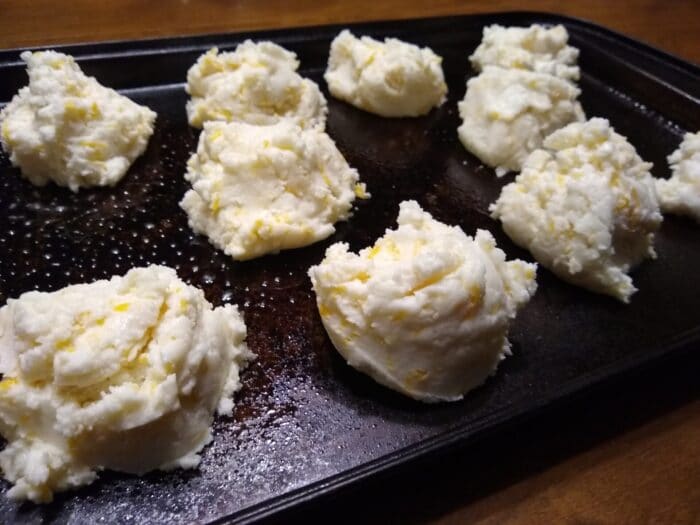 The biscuits before baking.

These biscuits were easy to whip up, and they come together just like other cheddar biscuit mixes I’ve made in the past. I mixed everything up and dropped the biscuits onto a rimmed baking sheet sprayed with nonstick spray. The biscuit dough had a somewhat fluffy, light texture.

After about 15 minutes in the oven, the biscuits were golden brown on top. I pulled them out of the oven, stirred the melted butter and seasoning mix together, and carefully spooned the mixture over the baked biscuits. 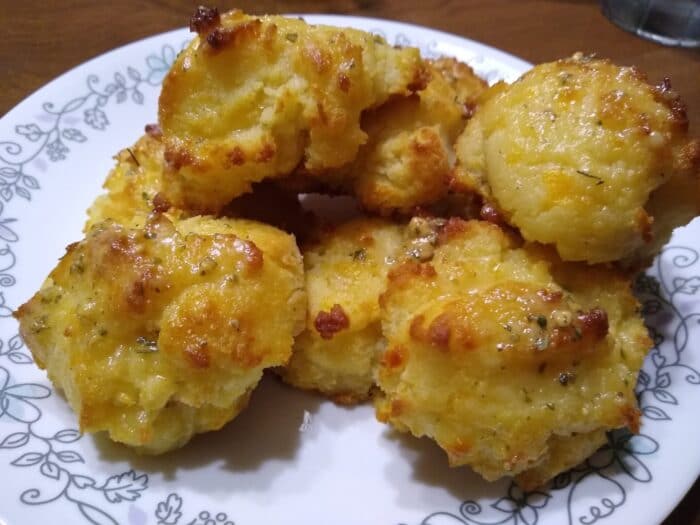 The biscuits after baking, with the garlic butter sauce on top.

These biscuits are surprisingly good. They are lightly crisp and flaky on the outside, with a soft, doughy inside. The texture is slightly different than traditional cheddar biscuits, which I don’t think bake up nearly as crispy on the outside and aren’t quite as soft on the inside. I like the texture of these gluten free biscuits, though. It works. The seasoning mix is spot on, with plenty of savory, salty, garlicky flavor. Some family members thought these left a slight aftertaste that wasn’t bad but just different. Overall, I rate these highly, whether you’re on a gluten free diet or not.

liveGfree Gluten Free Cheddar Cheese Biscuit Mix is the Aldi gluten free version of Red Lobster Cheddar Bay Biscuits. This mix does the job well. These copycat Red Lobster Cheddar Bay Biscuits aren’t an exact imitation of restaurant cheddar biscuits, but they’re very good in their own right. Even if you don’t eat a gluten free diet, these are good.