We make no secret of our love for Aldi breakfast foods. Whether it is Regular Buys like the awesome hash browns or Special Buys like the pancakes and sausage on-a-stick, Aldi makes a mean, almost restaurant-like first meal of the day. 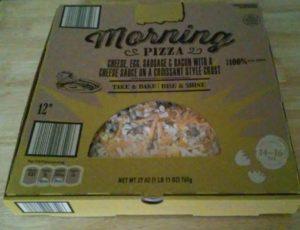 Mama Cozzi’s Morning Pizza is a take-and-bake Special Buy that shows up in the refrigerated section of the store. It’s a 12″ pizza loaded with cheese, egg, sausage, and bacon atop a cheese sauce, which in turn sits atop a croissant-style crust. Like other take-and-bakes, it doesn’t last as long as a frozen pizza, so you’ll want to pay attention to the expiration sticker on the side when you buy it.

Cooking it is pretty easy. Preheat the oven to 375 degrees, place the pizza on the center rack, and then cook for 14-16 minutes or until the cheese in the center is melted and the crust is golden brown. We are big-time fans of pizza crispers, so we recommend using one for cooking this pizza if you want a crisp crust but don’t want the mess of setting the pizza directly on the rack.

One other warning: the pizza comes on a cardboard tray, so be sure to remove the cardboard before setting the pizza in the oven.

We found the pizza took around 14 minutes to bake, and you might want to check it at 12 minutes just to be on the safe side.

It’s a solid-tasting pizza, especially if you like pork: the sausage and bacon go nicely with the egg and cheese, and the croissant-style crust is crisp. I can’t say that it’s my absolute favorite breakfast meal, but it’s solid and worth a try if you’re into the ingredients on top of the thing.

Mama Cozzi’s Morning Pizza is a competent breakfast pizza, especially if bacon and sausage are your thing. (And they most definitely our ours.) Recommended.