You really can’t go wrong with a take and bake pizza from Aldi. The discount grocery store sells several varieties as everyday Regular Buys, including a supreme pizza, a mega meat pizza, and even a cauliflower crust pizza with pepperoni. Aldi also rotates an ever-changing selection of limited-time take and bake pizzas onto its shelves, including a broccoli and cheese pizza and even a green bean casserole pizza (which was surprisingly good!).

All Aldi take and bakes are good options if you want an easy, convenient, and inexpensive lunch or dinner. At about $5 to $6 per pizza, they cost less than many restaurant or takeout pizzas, and many Aldi fans swear they are as good as takeout pizza.

Most recently, my family tried one of the everyday sausage and pepperoni take and bake pizzas from Aldi during a family movie night. 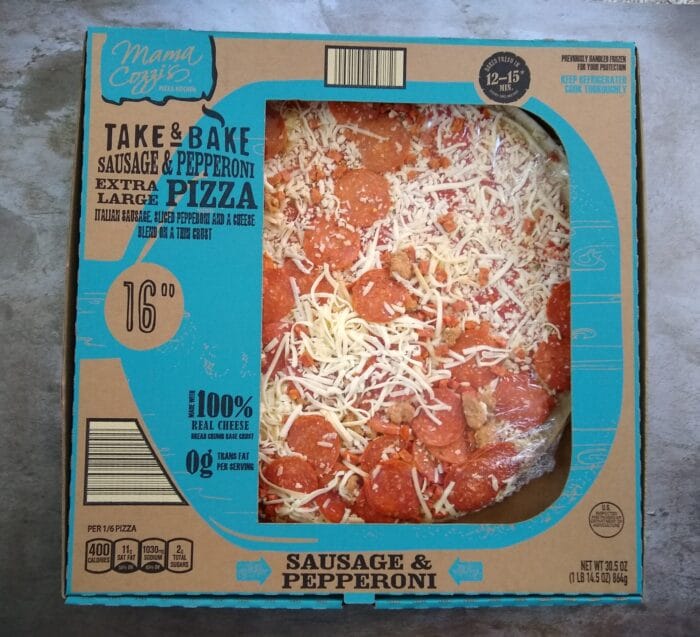 Mama Cozzi’s Take & Bake Sausage and Pepperoni Extra Large Pizza cost $5.59 for a 16-inch, 30.5-ounce pizza at the time of publication. The package states this is made with “Italian sausage, sliced pepperoni and a cheese blend on a thin crust.”

The package also says this pizza was “previously handled frozen for your protection.” It should be kept refrigerated and cooked thoroughly. The pizza I purchased on December 1st had a sticker with December 7th printed on it, so the pizza is probably good until then. I know some people who freeze their Aldi take and bake pizzas to make them last longer. 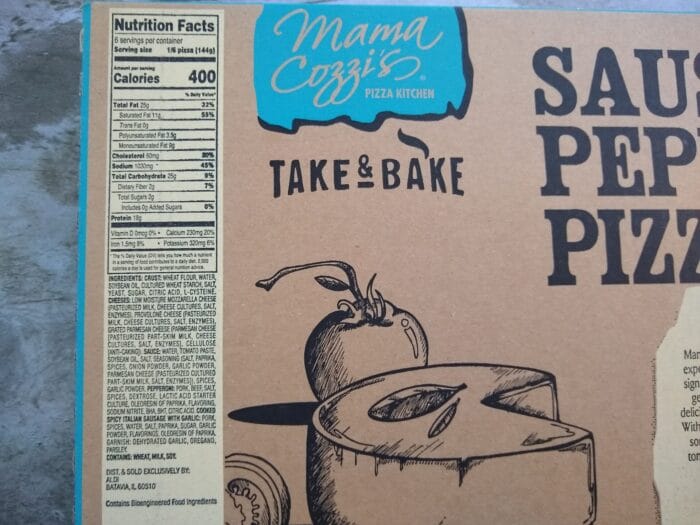 To bake the pizza, preheat your oven to 400 degrees Fahrenheit. Remove the pizza from all packaging. Place the pizza (thawed) directly on the center oven rack. Do not bake the pizza on the cardboard tray. (I always bake my pizza on a pizza pan to keep my oven cleaner.) Bake for 12-15 minutes or until the cheese in the center is melted and the crust is golden brown. Carefully remove from the oven and let cool for 2-3 minutes before slicing.

Before baking this, I had to rearrange some of the pepperoni pieces that had appeared to have shifted around during shipping, but that’s common with many store-bought pizzas.

Because this pizza is larger than most store-bought pizzas, I have to be careful when I bake this in my smaller-than-average oven because there is less space for air flow once I put this giant pizza in. I rotated the pizza every 6 minutes or so in my oven to prevent the crust edges from burning. 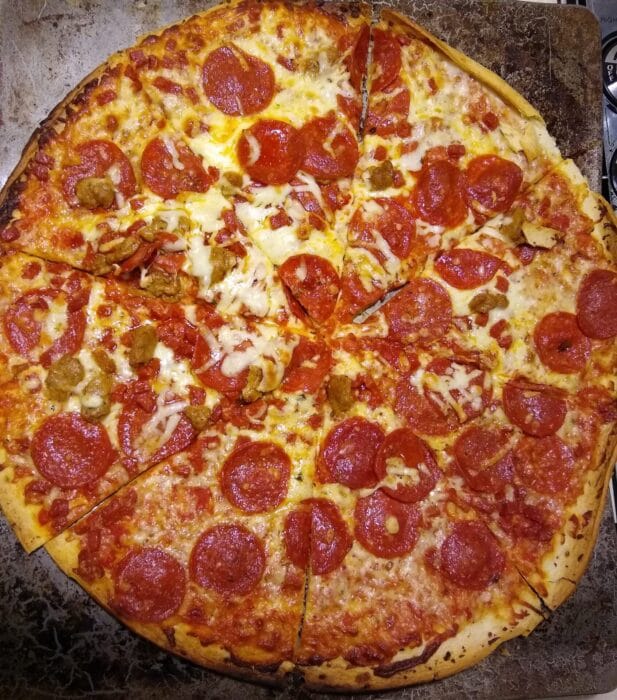 This pizza is as good as any of the other take and bake pizzas I’ve purchased from Aldi. The thin crust is crispy, and the toppings are generous, while the sauce’s flavor is spot on. This had plenty of cheese, and in addition to the sliced pepperoni, it also had small diced bits of pepperoni sprinkled on top. It has less meat than the Aldi mega meat take and bake pizza, but there’s still lots of meat. The pizza’s larger size means everyone gets filled up, too. I wouldn’t hesitate to buy this pizza variety again.

Mama Cozzi’s Take & Bake Sausage and Pepperoni Extra Large Pizza is another fantastic option from the Aldi take and bake pizza collection. It bakes quickly and easily for times when you want a meal in a hurry, and it’s topped with lots of cheese, sausage, and diced and sliced pepperoni. Recommended.