Okay, maybe not green bean casserole pizza. But pizza topped with the emerald-colored beans and French fried onions is actually a real thing at Aldi right now. I saw chatter on social media about this Aldi pizza and knew that — even if it ended up being awful — I had to put it on my shopping list for the week. Spoiler: strange as it may sound, this pizza was surprisingly good.

This is an Aldi Find, which means it’s only in stores for a short time. (And no, Aldi won’t ship it to you.) If you want take and bake pizzas after this one sells out, though, Aldi sells a number of them in different varieties year round under its Mama Cozzi private label. Take and bake pizzas that are generally always available include a supreme pizza and a mega meat pizza, and they rival certain takeout pizza brands.

If you’re watching out for allergens, this green bean casserole pizza contains wheat, milk, and soy. 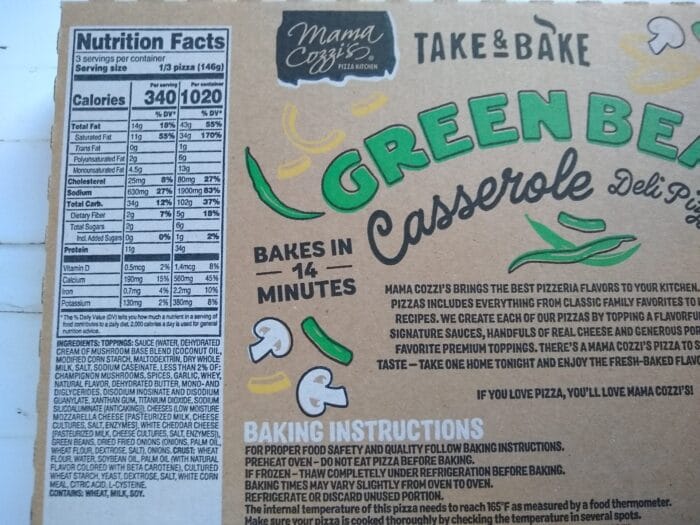 To bake this pizza, preheat the oven to 425 degrees Fahrenheit. Remove the pizza from packaging. Place the thawed pizza directly on the center oven rack (I used a metal pizza pan with holes). Do not bake the pizza on the included cardboard tray. Bake for 11-14 minutes or until the cheese in the center is melted and the crust is golden. Carefully remove the pizza from the oven and let it cool for 2-3 minutes before slicing. 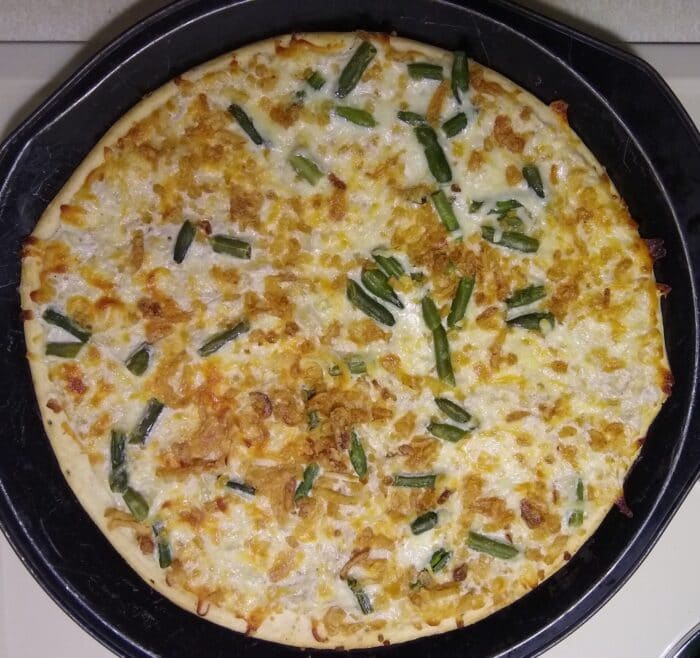 This pizza was done after about 13 minutes in my oven. I sliced it up, passed it out to my family, and we tried it, unsure of what we were getting into.

Fortunately, my family was pleasantly surprised at how good this pizza tasted, after we got over the mental hurdle of combining pizza and Thanksgiving casseroles. This pizza features a thin crust topped with what tastes very much like a cheesy green bean casserole. It has plenty of cheese, a good amount of fried onions, and just enough green beans to make it interesting but not overwhelming. We thought it was fairly light on the green beans, but considering that this is a pizza, we didn’t think that was necessarily a bad thing. We also like the creamy mushroom sauce under all the toppings; it tastes like a mashup of cream of mushroom soup and a white alfredo sauce.

I don’t know if this will become an annual Thanksgiving season tradition for us, but it certainly was fun to try and tasted good, too.