Aldi has offered several types of cauliflower crust pizzas over the years, usually as limited-time Aldi Finds. Most recently, I decided to try a take and bake style cauliflower crust pizza that is actually a newer addition to the year-round Regular Buy selection at Aldi. If you’ve ever tried any of the other take and bake pizzas from Aldi, you know they’re really good, and they often rival pizzas you might get at takeout chains. 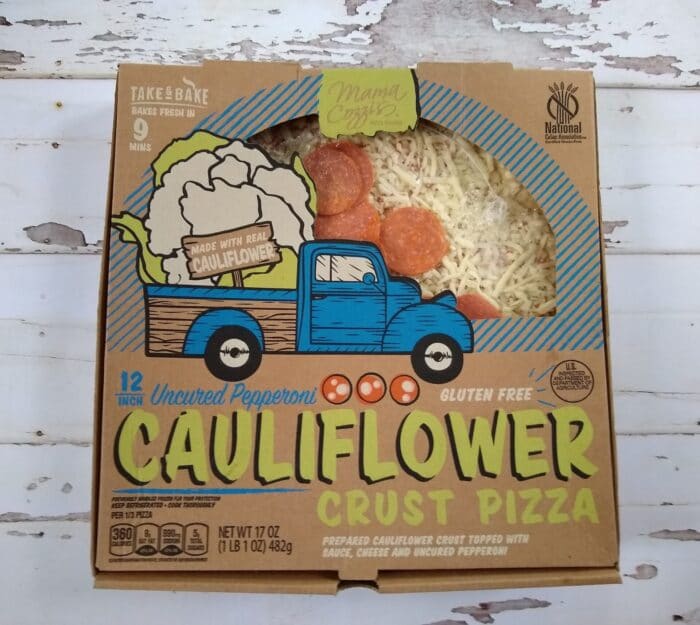 Mama Cozzi’s Take & Bake Uncured Pepperoni Cauliflower Crust Pizza cost $6.79 for a 17-ounce, 12-inch pizza at the time of publication. It’s made with real cauliflower and is advertised as a “prepared cauliflower crust topped with sauce, cheese and uncured pepperoni.” Aldi also had a veggie-topped take and bake cauliflower crust pizza, which I might try later, but my kids lobbied to try the meaty version first.

As mentioned above, this is a Regular Buy that is sold all year at Aldi. You can find it in the refrigerated section with all the other take and bake pizzas.

It is certified gluten free by the National Celiac Association. If you’re watching out for allergens, it contains egg and milk. 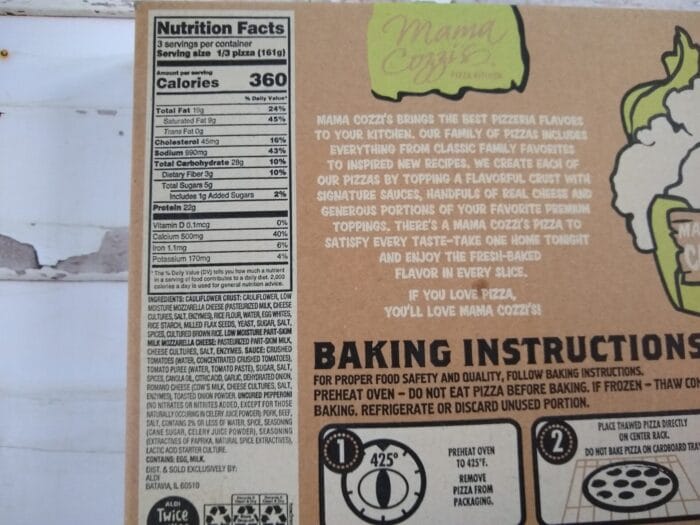 With that said, this is not really a healthy food. It’s loaded with fat and sodium. While it might have slightly fewer carbs than some (but not all) traditional pizzas, many people on strict keto diets would probably not consider this low carb. However, if you want a gluten-free pizza, this is a winner. 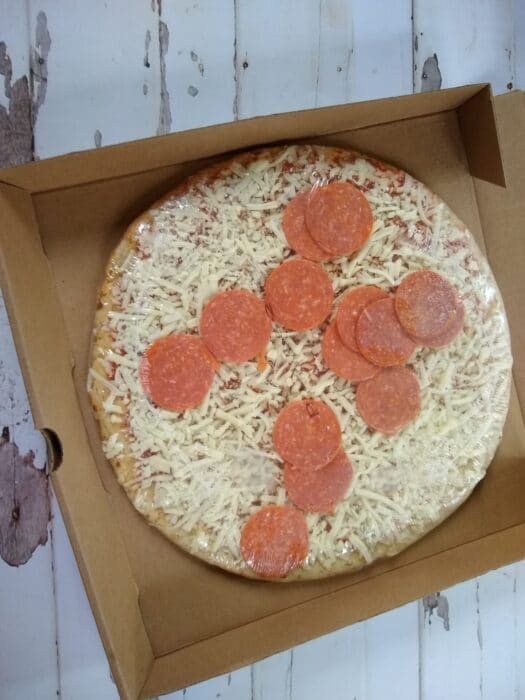 The unbaked pizza in the box, still wrapped in plastic. I spread the pepperoni out before baking.

To prepare this pizza, preheat your oven to 425 degrees Fahrenheit. Remove the pizza from the packaging and place it directly on the oven’s center rack. Do not bake the pizza on the cardboard tray. (I opted to bake my pizza on a metal pizza pan with holes specially designed to cook pizza crust.) Bake for 9-10 minutes or until the cheese in the center is melted and the crust is golden. Carefully remove from the oven and let cool for 1-2 minutes before slicing. 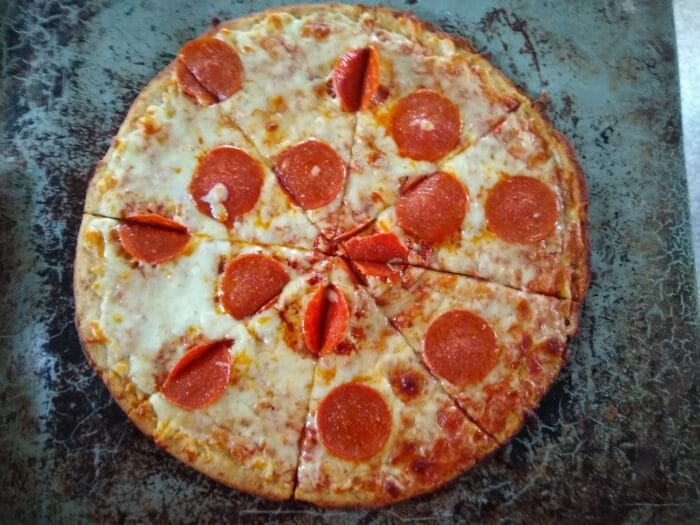 The pizza after baking and slicing.

I took my pizza out of the oven after about 9 minutes because it looked done on top, but when I went to slice it, I discovered the crust was still very soft. I popped it back into the oven for about 3 additional minutes. That helped some, but I think this pizza simply has soft crust. I realize that baking it directly on the oven rack rather than on a metal pizza pan with holes might have helped to crisp up the crust, but I really don’t like cleaning my oven, and several Aldi Reviewer readers have commented that their Aldi cauliflower crust pizzas have soft, flimsy crusts even when they follow the directions and bake directly on the rack.

The soft crust was not off-putting to my family, and this pizza didn’t last long. The crust is flavorful but doesn’t really taste like cauliflower, and I don’t always eat the outer edge of pizza crust, but this crust had crisp and flavorful (slightly cheesy-tasting) edges and I ate it all. There is plenty of sauce, cheese, and savory pepperoni atop this pizza. Just be sure you have forks on hand if you don’t want to get your hands messy and greasy with droopy slices.

Mama Cozzi’s Take & Bake Uncured Pepperoni Cauliflower Crust Pizza is a good gluten-free option but not necessarily a low-carb pizza. The crust comes out of the oven on the soft side, and baking it directly on the oven rack may or may not alleviate that issue, but my entire family liked this pizza and I wouldn’t hesitate to buy it again. Just keep napkins and utensils handy.