We’ve had a lot to say about Medion this year. Back in July, we profiled the company, which is owned by the Chinese conglomerate Lenovo. Not long after, we took a look at the Medion Laptop and Medion Tablet, which we found to be more powerful than a lot of other Medion products released to date.

Now, we take a look at a new Medion pair: a desktop PC and a monitor. These are limited-availability Special Buys, so they’re not sold in every state. 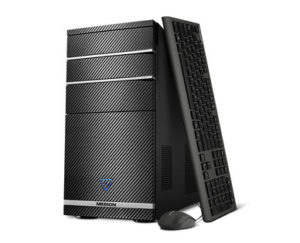 The Medion Desktop PC — known formally as the Medion Akoya P2125 D (MD 8332) — reminds us a lot of the Medion Laptop that released back in August. We’ll discuss specific numbers momentarily, but if you’re not tech-savvy, here’s what you need to know: this is a very competent office computer. It’s not a gaming rig — the built-in graphics card won’t do a lot — but if your primary need is surfing the internet and doing office work, this one looks good.

The price is around $400, which we think is competitive compared to other comparably equipped models, and it comes with a 1-year warranty, which is pretty typical for computers. (It also comes with a keyboard and optical mouse.)

We’re especially impressed by the dual hard-drive configuration, as the SSD should allow for a very fast startup, and the 1 TB hard drive is a nice size for storing media. This computer should be pretty fast all around, including on the Wi-Fi side of things thanks to 802.11ac compatibility. As we said before, it’s not going to be a real gaming PC, but it should do most other things pretty well.

Any drawbacks? There’s no Microsoft Office, although that’s pretty normal with PCs nowadays. There’s also no included monitor, although Aldi has a solution for that: 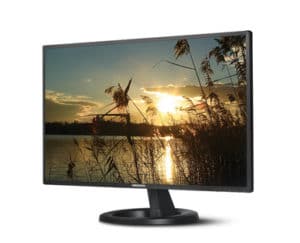 If you buy the Medion desktop PC but also need a monitor, there’s the Medion Akoya P57489 27″ LED-Backlit Monitor. As far as monitors go, this one looks pretty decent. It’s $150, which is lower than most other similarly sized monitors we surveyed online. If you’re not a numbers person, know that this is a solid office monitor.

Medion doesn’t have a ton of information about specs on this system, but we do know that it’s a 1080p LED-backlit monitor (1920 x 1280) with HDMI and DVI-D connections. The specs also boast a brisk 6 ms response time, which should be fine for most things. On the other hand, the specs don’t mention frame rate; we assume it’s 60 Hz, which, if true, might be a drawback for some gamers, so check the specs carefully if you’re looking for something more than an office display.

Both the Medion Multimedia PC System and the Medion 27″ Monitor look like solid values, especially for the price. If you’re looking for hardcore gaming, this probably isn’t for you, but if you’re in the market for an office setup, this might be worth a look.