It’s October, and that means fall and Halloween decorations are in full swing at Aldi. The discount grocery store shines during this time of year, pulling out all the stops with porch signs, lanterns, luminaries, scarecrows, ceramic and fabric pumpkins, whimsical witch hat garlands, bat decorations, pumpkin casserole dishes, real pumpkins and gourds, and more.

But at Aldi, October isn’t just about decorations that grownups put up in and around the house. Aldi also sells all kinds of fall fun for kids and for people who are kids at heart. That includes pumpkin carving kits, haunted house cookie decorating kits, union suit costumes, costume masks, assorted candy, and other fun Halloween products.

Read on to learn more about the Squishmallows at Aldi this fall. Keep in mind that these are Aldi Finds, which means that each store gets one shipment, and after that sells out, they’re gone unless Aldi decides to bring them back next year. Aldi does not have online ordering for products that are not in stock at your area store.

Hocus Pocus and The Nightmare Before Christmas Squishmallows at Aldi: 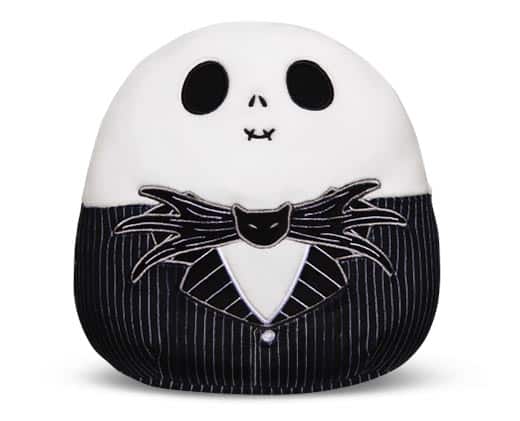 Jack Skellington from The Nightmare Before Christmas. 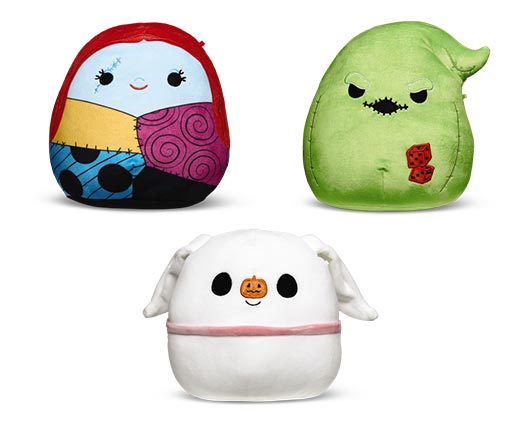 Characters from The Nightmare Before Christmas: Sally and Oogie Boogie Man at top, Zero at bottom.

First, during late September, Aldi sold 8-inch-tall Squishmallow characters from the movies Hocus Pocus and from Tim Burton’s The Nightmare Before Christmas. These arrived on store shelves on either September 25th or September 28th of 2022, depending on whether the weekly ad goes into effect on Sunday or Wednesday at your local store.

Characters included Jack, Sally, Oogie Boogie Man, and Zero from The Nightmare Before Christmas, along with Winifred, Mary, and Sarah (also known as the Sanderson Sisters) from Hocus Pocus 2. The Sanderson Sisters. Mary at top, Winnifred and Sarah at bottom. Photo via hip2save.com.

The Sanderson Sisters are timely because Hocus Pocus 2 was just released on Disney+. The Hocus Pocus Squishmallows were so popular many of them disappeared quickly after appearing on Aldi store shelves, and they were the subject of much discussion on Aldi fan Facebook groups.

And if you happen to have scored these plush toys from Aldi, you might also want to pick up the LED projector Aldi is selling so you can watch all of these movies on the big screen.

Other Halloween and Fall Squishmallows at Aldi: 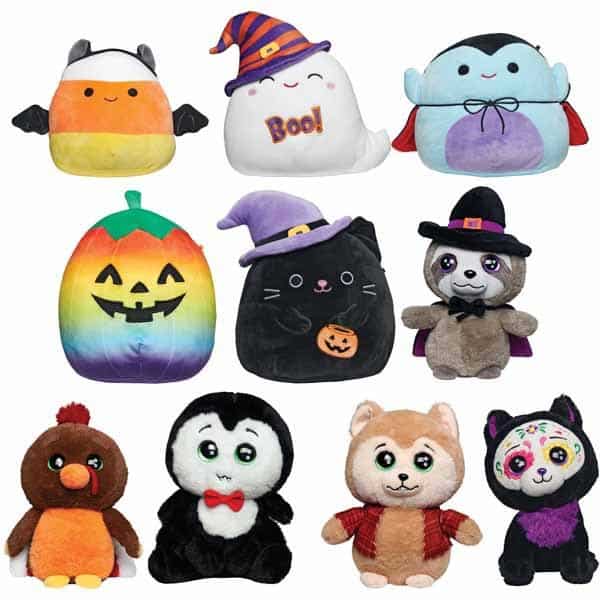 In addition to the cult classic movie characters listed above, Aldi also is selling some 8-inch-tall Kellytoy general Halloween Squishmallows and some Lil’ Pepper stuffed animals in early October. Choose from a:

These are $4.99 each. These are scheduled to be on Aldi shelves on either October 9th or October 12th of 2022, depending on when your store’s ad goes into effect.

Again, if you aren’t able to get these at Aldi, you can find these and similar Squishmallows on Amazon, but you’ll pay more.

Whether you purchased the movie character Squishmallows or the cute Halloween-themed Squishmallows at Aldi, these make a fun addition to both your fall décor around the house and the toy box.

Which Halloween Squishmallows did you buy from Aldi this year? Let us know in the comments below.