Among the meat options out there, chicken is one of the more healthy ones. Chicken is lower in fat and cholesterol than red meats, and it has some vitamins and minerals to boot. White chicken meat, especially, can be a solid part of a balanced diet, especially if it’s not fried and doesn’t have the skin still on it. For those reasons, skinless chicken breast is the healthiest part of the bird.

Chicken isn’t difficult to cook, with most people opting to bake or grill it. On occasion, you might find that you need chicken that is already pre-cooked, something many grocery stores carry. Aldi has pre-cooked chicken, although most of it is breaded chicken in the frozen section. Recently, though, we spotted another pre-cooked Aldi chicken offering, one that wasn’t breaded. We decided to give it a try. 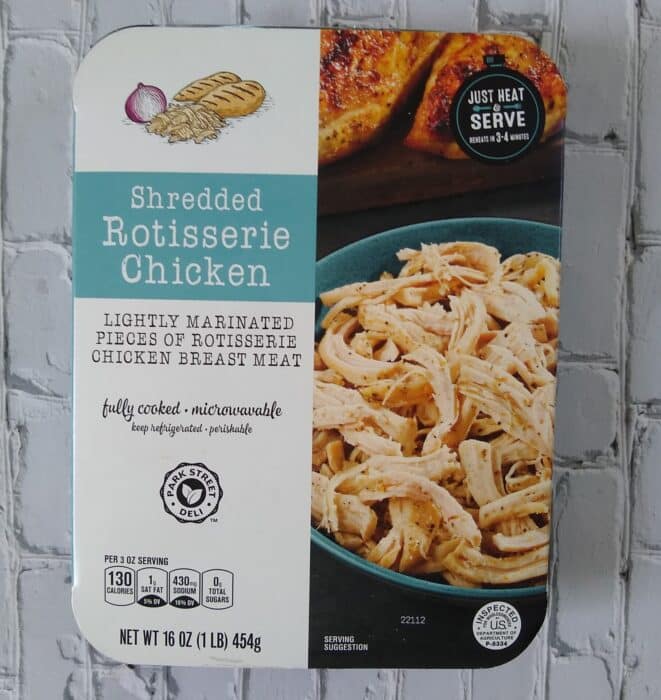 Park Street Deli Shredded Rotisserie Chicken is an Aldi Find, which means it’s only in stores for a short time. Once it’s sold out, you won’t be able to find it in stores again until Aldi brings it back, which it may or may not do. Aldi does not offer online ordering for products that aren’t in stock at your local store.

Of note: this packaging looks identical to several Regular Buy meat products including burnt ends, beef brisket, and pulled pork. So it’s possible this might turn into a Regular Buy down the road. For now, though, it’s a limited-time item.

At the time of this post, the 16-ounce package costs $5.99. That comes out to about 37 cents an ounce. The package comes refrigerated and should be kept refrigerated until you prepare it. It is perishable; while I didn’t see a use-by date on the package, this is probably not something you’ll want to keep in the fridge for too long.

The container comes with both microwave and stovetop instructions. To heat in the microwave, remove the cardboard sleeve and plastic film, then cover with a paper towel. Next, microwave on high for 2 minutes. Next, stir, re-cover, and microwave for 1-2 minutes longer or until hot.

To cook on the stovetop, heat 1 tablespoon of oil in a large skillet on medium heat, then add the chicken meat, stirring frequently, for 4-6 minutes or until hot.

We cooked it in the microwave. Our chicken was hot after 3 total minutes, but your mileage may vary. 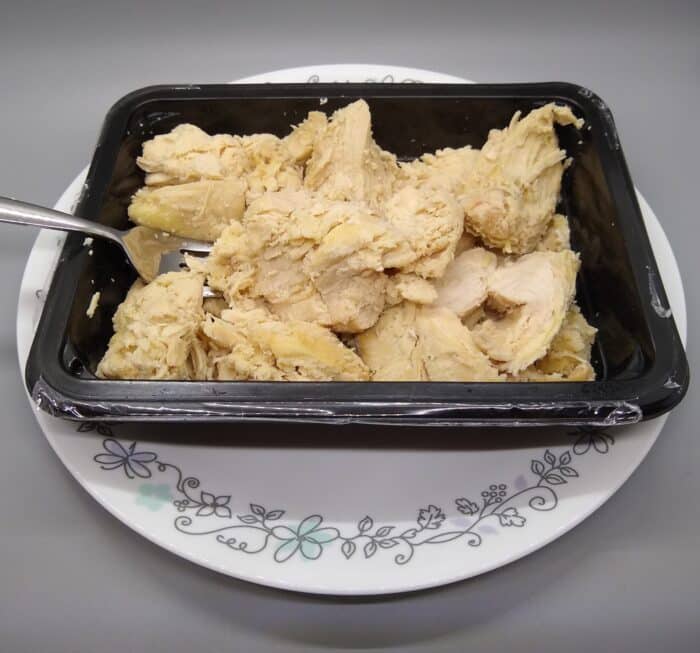 We liked it. Depending on how much flavor you like to add to your chicken, you might add a little salt or maybe a sauce, but this is consistent with the fact that it’s advertised as lightly marinated. Traditional rotisserie chickens from a larger grocery store aren’t usually heavily seasoned either. Also as advertised, this chicken is mostly shredded — it’s perhaps a little chunkier than we’d like, but it’s not hard to pull it apart. It’s also tender and isn’t too dry. It works nicely as part of, say, a barbecue chicken sandwich, but it also is fine with a side of potatoes, too. It’s the equivalent of buying an already-cooked rotisserie chicken with the meat pulled off the bones at a regular grocery store, which means you have some options when it comes to how you serve this.

We did find one medium-sized piece of cartilage in the meat, but it was otherwise all right.

Nutritionally, it’s a little more processed than what you’d make yourself. It’s also got egg as an allergen. On the other hand, it’s relatively low in fat, if higher in sodium and cholesterol. 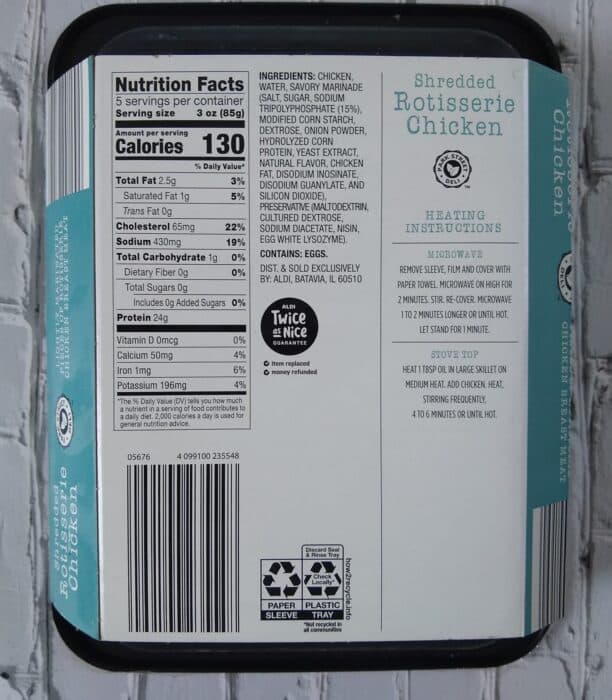 Park Street Deli Shredded Rotisserie Chicken checks off the boxes as an easy way to get hot shredded chicken breast in mere minutes. It’s lightly marinated, which makes it versatile, and it has the taste and texture we would expect. Right now, it’s only an Aldi Find, so hopefully it will find its way onto the Regular Buy shelves in the future.