Aldi knows how to tempt me with ice cream and frozen desserts every summer. Whether it’s the Aldi version of Klondike Bars, or ice cream sandwiches, or a carton of Moose Tracks, there’s always something for my sweet tooth.

The most recent ice cream options at the discount grocer included some novelty cones with outer space and unicorn themes. 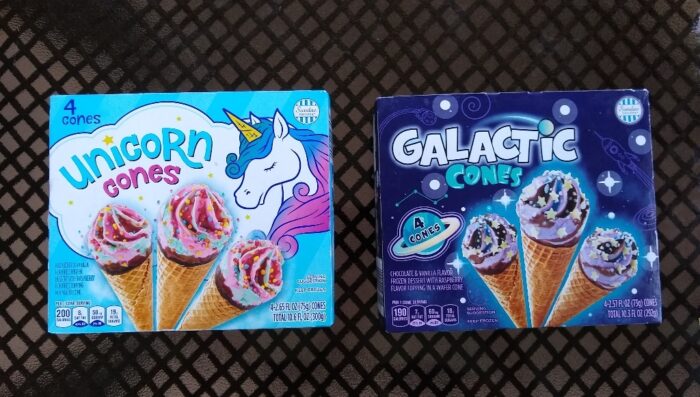 Sundae Shoppe Galactic Cones and Sundae Shoppe Unicorn Cones cost $3.49 for a box of four cones at the time of publication. That comes out to about 87 cents per cone.

These are Aldi Finds (Special Buys), which means they’re only in stores for a short time, and once they’re gone, that’s it until the next time Aldi decides to bring them back. I saw them in ads twice over the course of the summer of 2020, but I was only able to find them in my local stores once.

These are not made with actual ice cream but rather with “frozen dessert.” Whether a dessert can be called ice cream or frozen dessert comes down to milk fat content. Ice cream must contain at least 10% milk fat. If not, it’s frozen dairy dessert or even just plain frozen dessert. I also noticed both of these cones have a lot of air whipped into them, which can also affect whether something is classified as ice cream or a frozen dessert.

Among other things these cones are made with reconstituted skimmed milk, sugar, and coconut oil. They also contain a lot of processed ingredients such as glucose syrup, mono- and dyglycerides, locust bean gum, and guar gum. (If you want a dessert that is just ice cream with whole, recognizable ingredients, I like the Specially Selected Super Premium Ice Cream at Aldi, available in vanilla and chocolate.)

Also of note, these cones are made in Slovenia, in Central Europe. It is likely these are made by Leone, a company whose website shows ice cream cones that look a lot like these, and they list Aldi as one of their corporate partners. I’ve seen Aldi sell other frozen novelties in recent years that also appear to be made by Leone, including the Sundae Shoppe Reindeer and Snowman Ice Cream Pops.

Read on for a closer look at the unicorn and galactic cones. 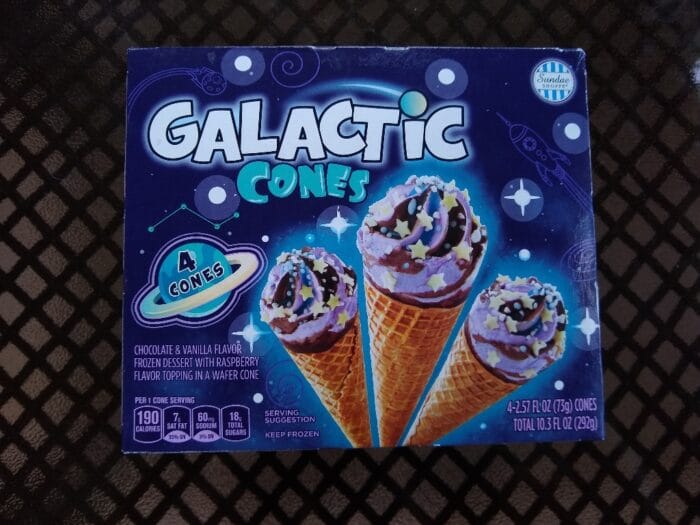 The box describes these as a “chocolate & vanilla flavor frozen dessert with raspberry flavor topping in a wafer cone.”

When you open the box and pull out an individually wrapped cone, it looks … different. Most of us are accustomed to standard drumstick ice cream cones that are wrapped in paper or thin cardboard. Instead, these have a foil-and-paper wrapping around the waffle cone, with a plastic bubble over the decorative ice cream part to help it maintain its shape during shipping. 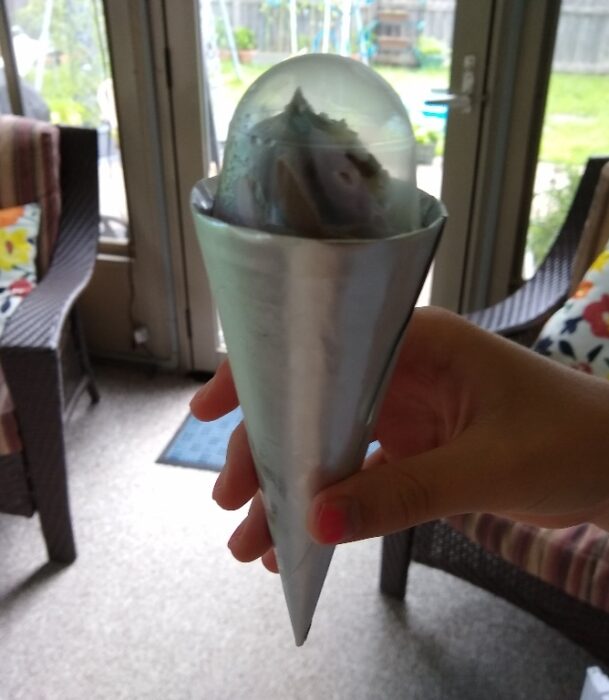 The cone, with its wrapper and plastic bubble. It looks like its own personal space ship. (Click to enlarge.)

And when you peel off the wrapper and lift the plastic bubble, you reveal a pretty cool-looking cone. These taste good, with fun sprinkles and an unexpected raspberry syrup mingling with the chocolate and vanilla “ice cream.” 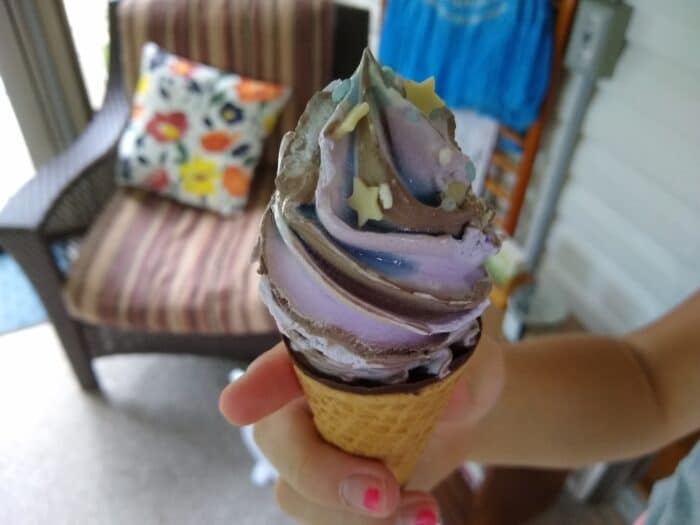 They look as advertised. 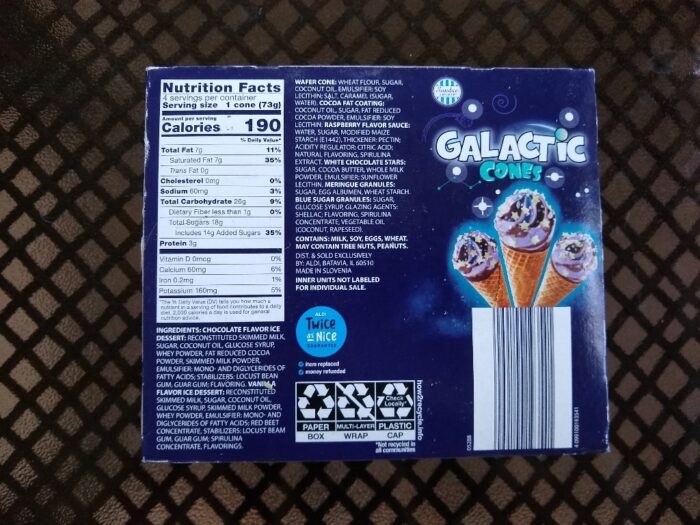 If you’re watching out for allergens, these contain milk, soy, eggs, and wheat. They may contain tree nuts and peanuts. 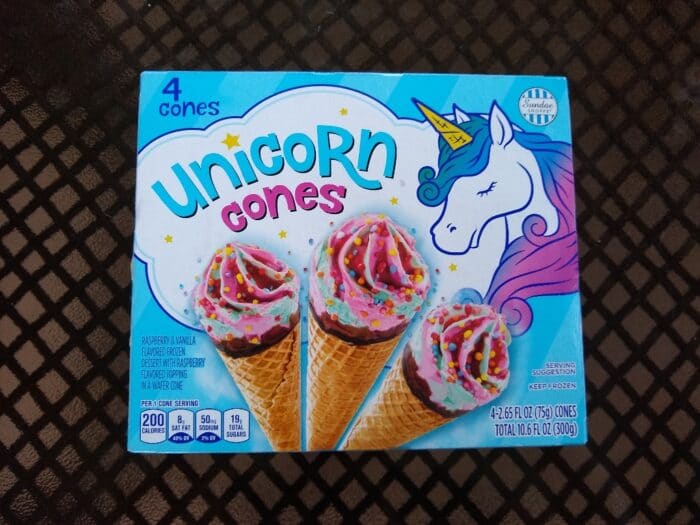 The box describes these as “raspberry & vanilla flavored frozen dessert with raspberry flavored topping in a wafer cone.”

These are packaged in the same way as the Galactic Cones, with a foil and paper wrapping around the cone and a plastic bubble over the “ice cream” portion. 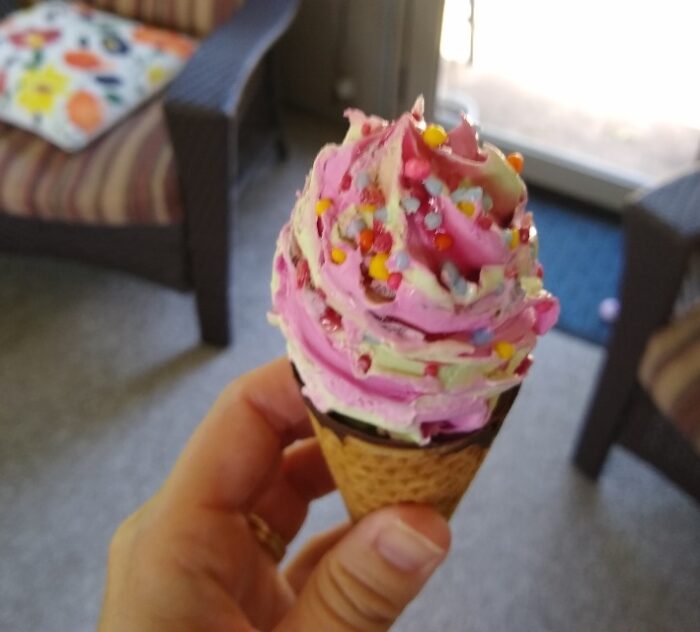 My family all approved of these cones. They have a unique taste with swirls of raspberry and vanilla “ice cream” and lots of sprinkles, plus a gooey raspberry topping. 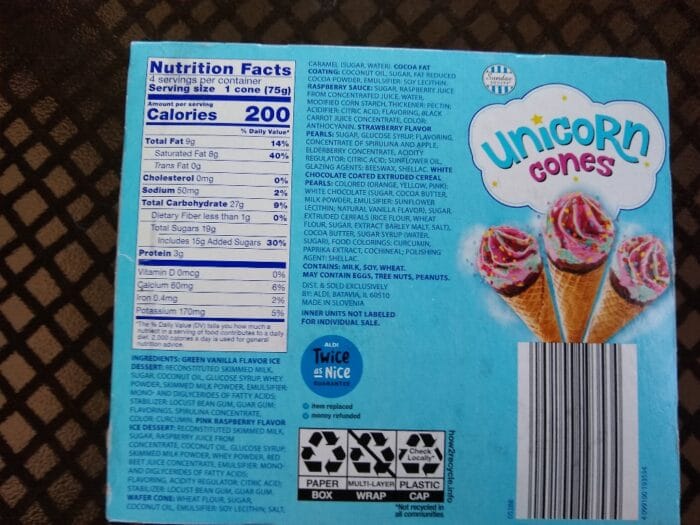 If you’re watching out for allergens, these contain milk, soy, and wheat. They may contain eggs, tree nuts, and peanuts.

Sundae Shoppe Galactic Cones and Sundae Shoppe Unicorn Cones are a fun frozen novelty at Aldi during the summer months. They are made in Slovenia, most likely by the ice cream company Leone, which has produced other frozen novelties for Aldi.