They’re pretty easy to make at home with some tortillas, cheese, meat, and salsa or seasonings. However, if we need a super simple meal that comes together in minutes, Aldi sells frozen Mexican and Tex-Mex food that can be prepared quickly.

One option that showed up in the Aldi freezer section recently was the Casa Mamita Chicken Quesadillas. 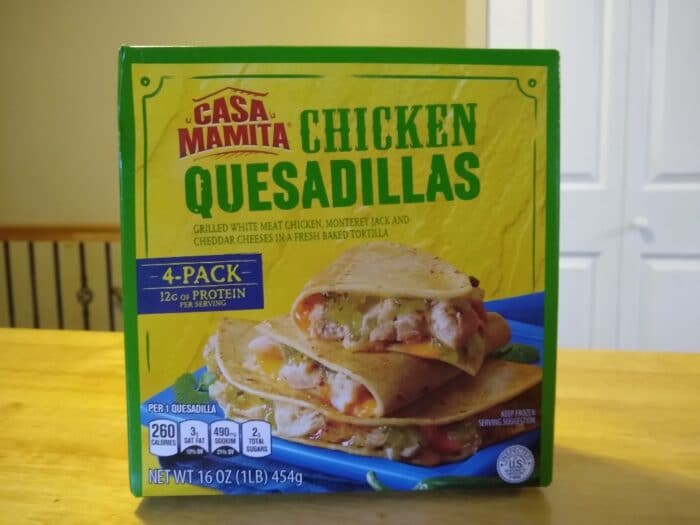 Casa Mamita Chicken Quesadillas cost $3.69 at the time of publication for a 16-oz. box containing four quesadillas (about 92 cents per one-quesadilla serving). That makes these a better bargain than the quesadillas we tried a while back from Aldi’s cousin, Trader Joe’s, which sells a box that contains two servings for $4 (or $2 per serving).

These Casa Mamita quesadillas are Aldi Finds (Special Buys), which means they’re only in stores for a short time. They were sold during a Mexican-themed week when Aldi offered food such as shrimp tacos, steak fajita skillets, and burrito seasoning, along with taco night accessories such as taco holders, taco plates, and paella pans.

These quesadillas are described as “grilled white meat chicken, monterey jack and cheddar cheeses in a fresh baked tortilla.”

These are a processed frozen entree, so the ingredients list is lengthy and has some things you wouldn’t put in homemade or even find in restaurant quesadillas, such as guar gum and mono and diglycerides.

If you’re watching out for allergens, these contain wheat, milk, and soy. 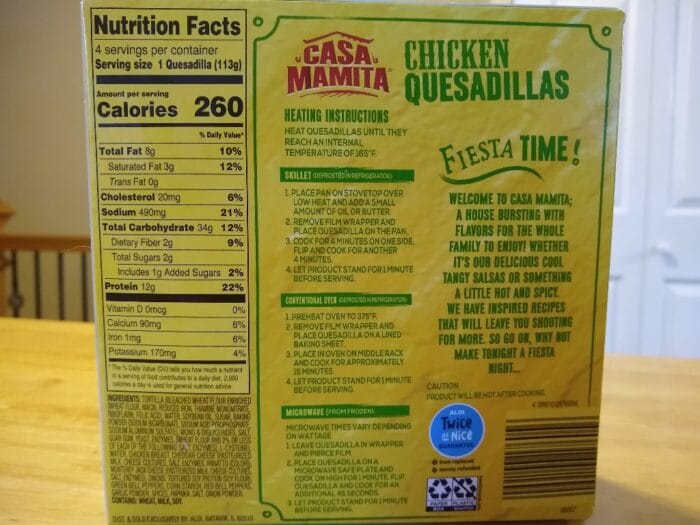 The quesadillas can be prepared in one of three ways: skillet, conventional oven, or microwave. The quesadillas are supposed to be thawed in the refrigerator if you cook them on the skillet or in the oven. They can be microwaved from frozen. However you prepared them, they should reach an internal temperature of 165 degrees Fahrenheit.

To cook in the skillet, first thaw in the fridge. Then place a pan on the stove top over low heat and add a small amount of oil or butter. Remove the film wrapper from each quesadilla and place quesadillas on the pan. Cook for four minutes on one side, then flip and cook for another four minutes. Let the quesadillas stand for one minute before serving.

To cook in a conventional oven, thaw the quesadillas in the fridge. Then remove the film wrappers and place quesadillas on a baking sheet. Place in the oven on the middle rack and cook for approximately 15 minutes. Let the quesadillas stand for one minute before serving.

To cook in the microwave, leave a frozen quesadilla in the wrapper and pierce the film. Place the quesadilla on a microwave-safe plate and cook on high for one minute. Flip quesadilla and cook for an additional 45 seconds. Let stand for one minute before serving. 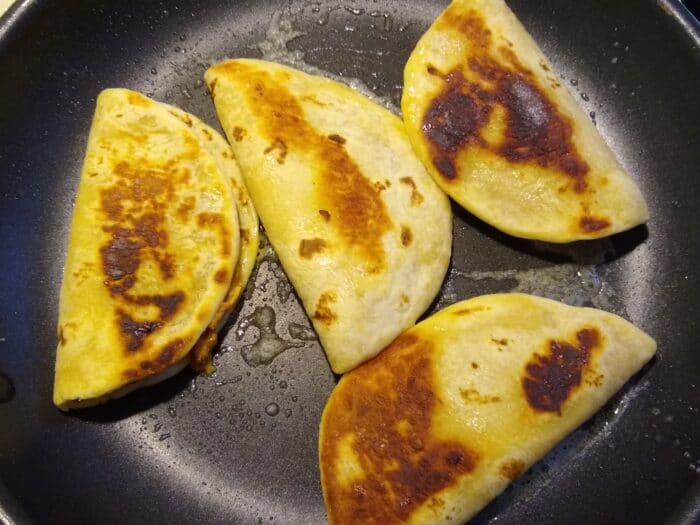 After cooking in the skillet. Be sure to cook on low heat so the outsides don’t get too brown.

I opted to prepare these in a skillet on the stove top, but I didn’t read the fine print and therefore didn’t thaw the quesadillas in the refrigerator before putting them in the skillet. When they were not warmed all the way through after cooking four minutes on each side in the skillet, I realized my mistake, and I popped them in the microwave (30 seconds for two quesadillas). That heated them enough, and then I put them back in the skillet for another minute or two to make sure they were good and crisp, especially after their time in the microwave.

There are no instructions on the box for quickly thawing these if you want to heat them on the skillet or in the oven. It just says to thaw in the refrigerator. However, for those of us who are less patient and who like crispy quesadillas, I think these could easily be thawed on the defrost setting in the microwave, or you could cook them in the microwave and then crisp them briefly on the skillet. Based on my own trial and error, these quesadillas seem to be forgiving if you want to experiment with ways to heat them.

As for how they taste, they are what I expected for a frozen entree, especially after having recently tried the frozen chicken quesadillas from Trader Joe’s. 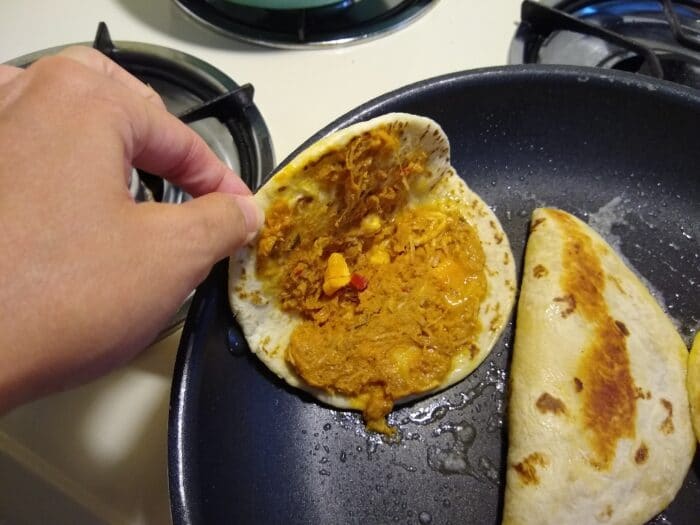 The filling. It’s mostly chicken and vegetable mush, with a few chunks. (Click to enlarge.)

These don’t taste bad, but they’re not going to be like homemade or restaurant quesadillas. Contrary to the image on the box that shows big chunks of chicken and distinct vegetables, the filling in these quesadillas is paste-like, a mixture of mushy chicken, spices, and veggies. I spotted one or two small chunks of peppers and meat in my quesadillas.

Also, the breading for these is not a typical thin flour tortilla like what you usually see with quesadillas. It’s more puffy and bread-like, but it tastes good.

Overall, these are decent and make a good quick lunch.

Casa Mamita Chicken Quesadillas are like other frozen quesadillas I’ve tried. The filling is a bit pasty and they’re not as good as what you can make homemade or buy from a restaurant, but they taste okay and can be heated up quickly if you don’t have a lot of time.