One of the most common components in Indian cuisine is bread. Specifically, most people who have enjoyed Indian food are familiar with naan, a type of flatbread baked in a tandoor or clay oven. Naan has a texture similar to a pita and is great for tearing into pieces and using for scooping and mopping up saucy dishes such as tikka masala.

However, naan is not the only type of flatbread that can be served with an Indian meal. If you haven’t yet had paratha, I highly recommend trying this other flatbread. Instead of being baked in a clay oven like naan, paratha is fried on a stone frying pan. It’s flaky and crispier and has a different texture than naan, and it’s delicious. 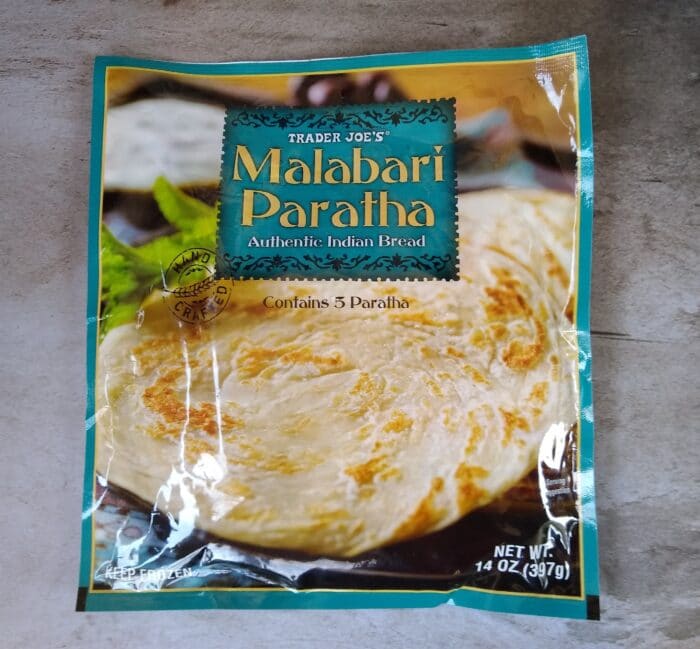 Trader Joe’s Malabari Paratha cost $1.99 for a 14-ounce package at the time of publication.

This is handmade, sold frozen, and is a product of India.

If you’re watching out for allergens, these contain milk and wheat. They may contain traces of soy and coconut. 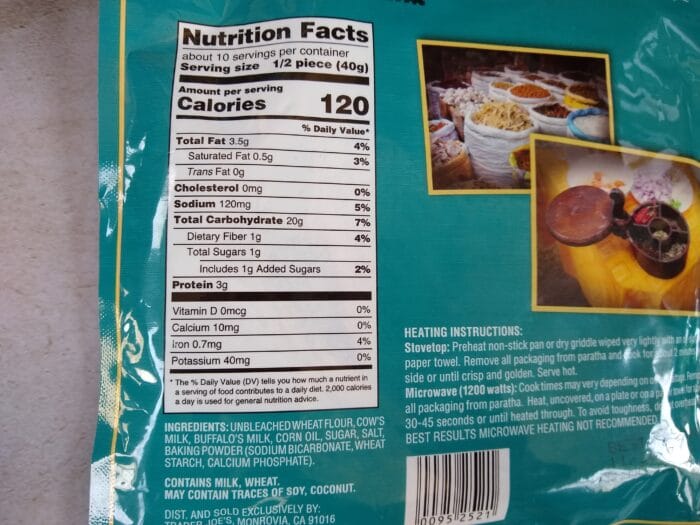 These can be heated on the stove top or in a microwave, but for best results microwave heating is not recommended.

To heat on the stove, preheat a nonstick pan or dry griddle wiped very lightly with an oil-dipped paper towel. Remove all packaging from the paratha and cook for about 2 minutes per side or until crisp and golden. Serve hot.

To microwave, remove all packaging from paratha. Heat, uncovered, on a plate or on a paper towel for about 30-45 seconds or until heated through. To avoid toughness, do not overheat. 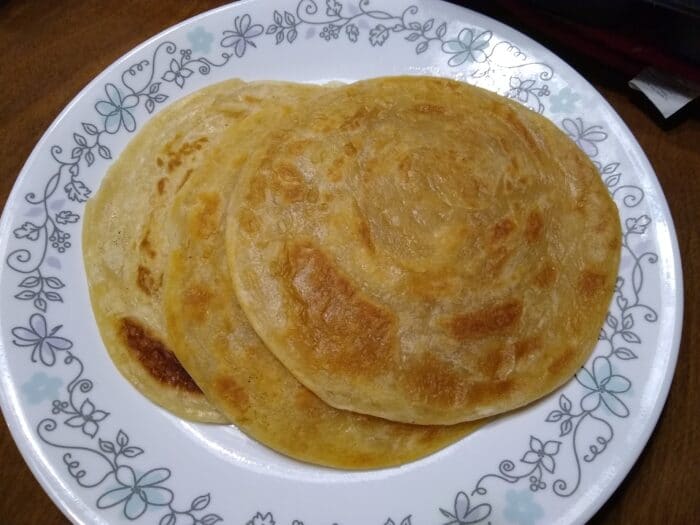 Crispy golden paratha after heating on a skillet with oil.

Paratha is versatile and can be served with butter spread on top, or with chutney, pickles, dahi (yogurt), with various meat or veggie curries, and more. I heated our paratha on a lightly oiled griddle on the stove top and served it alongside cooked shredded chicken with Cook House Butter Chicken Sauce from Aldi.

No one in my household has eaten paratha before, so we can’t necessarily speak to how authentic the TJ’s version is, but we all heartily liked this bread. My husband remarked that “this bread is really good.” It is crispy, flaky, buttery, and rich. It isn’t doughy like naan, but it still goes perfectly with just about any Indian cuisine you want to serve.

Trader Joe’s Malabari Paratha is sold alongside naan in the freezer aisle. This flatbread is thinner and flakier than naan and fries up crisp in a lightly oiled skillet. If you’re looking for a carby side to serve with Indian food, this is a great option.