I’ve loved Indian food since my husband introduced me to it back when we were dating years ago. While authentic restaurants are the best places to get Indian food, I also like trying Indian options from the grocery store. Aldi sells a few options, including naan, tikka masala sauce, butter chicken sauce, and korma sauce. Aldi’s cousin Trader Joe’s also sells a good variety of Indian dishes, with most of them found in the store’s freezer aisle. Some of my favorites include paratha, paneer tikka masala, and chicken tikka masala.

A more recent favorite at TJ’s that I’ve discovered is a vegetarian channa masala dish. Its featured ingredient is chickpeas, complemented by a tomato-based sauce and various spices. 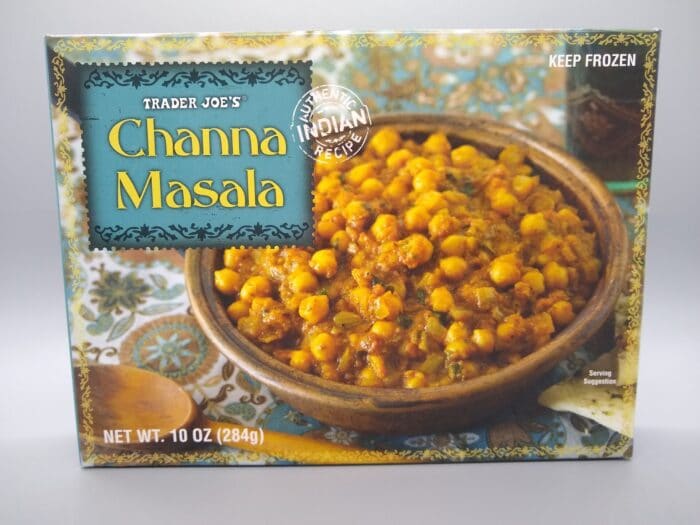 Trader Joe’s Channa Masala cost $2.49 for a 10-ounce package at the time of publication.

There are technically two servings in one package, but this is packaged like a microwavable tv dinner, and most individuals are probably going to eat the whole thing in one sitting, unless you’re serving it alongside side items such as naan, paratha, or samosas. Nevertheless, one serving or half of the package, has 180 calories, 9 grams of total fat (12% DV), 2 grams of saturated fat (10% DV), 10 mg of cholesterol (3% DV), 570 mg of sodium (25% DV), 22 grams of total carbohydrates (8% DV), 7 grams of dietary fiber (25% DV), 3 grams of total sugars, no added sugar, and 6 grams of protein.

This can be heated in the microwave or in a conventional oven.

To microwave, remove the tray from the carton and puncture the film 2-3 times. Heat on high for 4 to 4 1/2 minutes until heated thoroughly. Carefully remove the film and stir gently before serving.

To heat in a conventional oven (do not use a toaster oven), preheat the oven to 375 degrees Fahrenheit for 15 minutes. Place the tray on a cookie sheet on the middle shelf, leaving the film intact. Heat for approximately 20-25 minutes until heated thoroughly. Stir gently before serving. 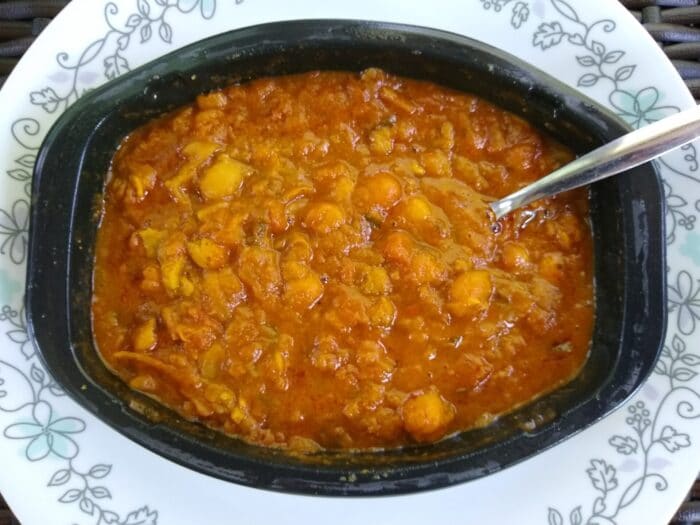 I heated this in the microwave, and it turned out well. It’s very filling, so you could easily share it, especially if you serve it with something like naan. It’s flavorful and aromatic, with a nice balance of spices and seasonings. Great for a weekday lunch, and easy to heat in the microwave if you’re on the go.

Trader Joe’s Channa Masala features chickpeas in a tomato sauce with plenty of flavorful spices. It heats quickly in the microwave for a nice vegetarian lunch. Recommended.