In 2011, three Wahlberg brothers — Donnie, Mark, and Paul — founded a restaurant in the suburbs of Boston, Massachusetts. Two of the three brothers brought celebrity status to the venture. Mark had been a well-known hip-hop artist in the 1990s before moving into acting, while older brother Donnie came to fame as part of boy band New Kids on the Block in the 1980s before following in Mark’s acting footsteps. Paul, who was not a celebrity, nevertheless was the cooking mind behind the Wahlburgers business, and would become much more famous when the brothers starred in a reality show based on the brand.

Wahlburgers currently has 49 restaurants in the United States, along with two in Canada and one in Germany. That leaves a lot of places that don’t have them. The company has worked to increase its restaurant presence with locations inside Hy-Vee grocery stores and is exploring options with Bass Pro Shops and Cabela’s, but as of the time of this post that still leaves a lot of open ground: we live in a major metro area and the nearest location — inside a Hy-Vee — is over an hour and a half away.

Like some restauranteurs, the Wahlbergs have found another way to get their food in front of people, and that’s through grocery stores. A growing number of grocers now carry Wahlburgers foods, including a large regional grocer in our area.

Of late, Aldi also has been carrying Wahlburgers foods, although only as limited-time Aldi Finds, which means you can only get them in stores for a short time. We’ve seen burgers, sauce, hot dogs, pickles, and this item: bacon. 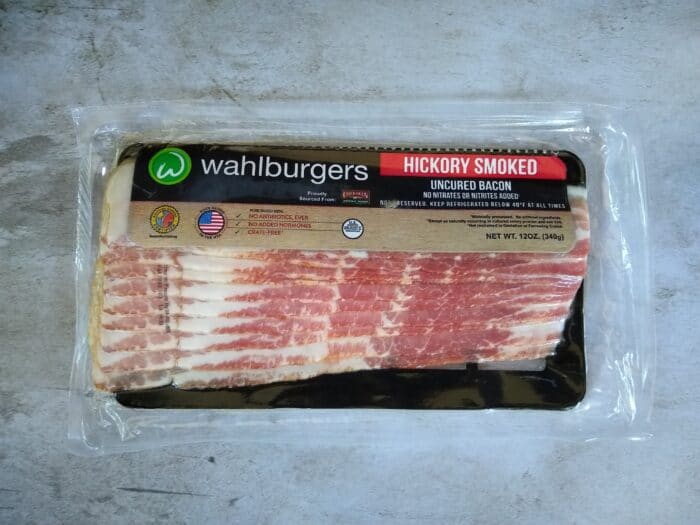 Wahlburgers Hickory Smoked Uncured Bacon comes in a 12-ounce pack and, at the time of this post, costs $5.99. At right around 50 cents an ounce, that’s far pricer than any Regular Buy bacon Aldi sells, and it’s more expensive than many of the other name-brand bacon options I could find at my local grocer.

According to the packaging, this bacon is sourced by Coleman Natural Foods. Coleman is a ranching operation that dates back to the 1870s, with its “natural” food line — raised in the U.S., with no antibiotics or hormones — emerging in the 1970s. The company was bought out by Perdue Farms in 2011 but continues to operate its natural foods operation.

The Wahlburgers bacon package offers three options for cooking: skillet, microwave, and oven. To use a skillet, heat the skillet to medium heat, then brown for 10 to 12 minutes, turning frequently. To microwave, place on a microwave-safe plate, cover with a paper towel, and then microwave for 2-3 minutes for 2 slices or 4-5 minutes for 4 slices. To bake, preheat the oven to 400 degrees, then bake in an oven-safe pan for 12-16 minutes.

We used the oven method, which we’ve found to be a surprisingly effective way to cook bacon. We placed the bacon on a pan lined with parchment paper, then baked for 12 minutes. In our test, they were definitely ready after 12 minutes, but your mileage may vary. 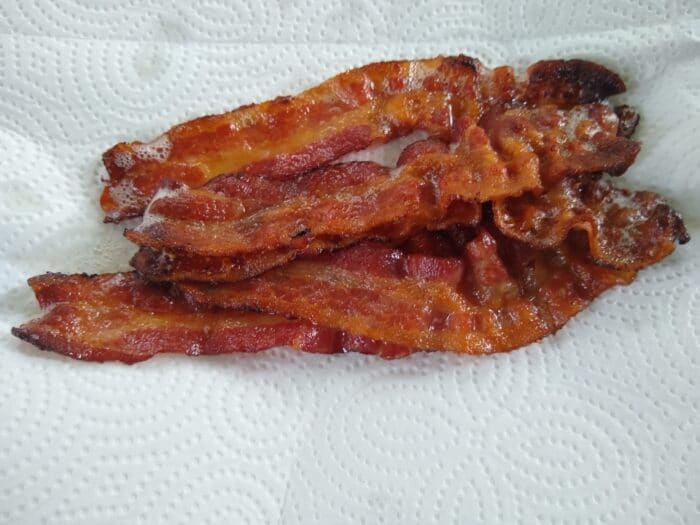 This bacon is good. It’s incredibly crisp and light, and it melts in your mouth with a pitch-perfect hickory smoke flavor. Whatever you might think about bacon sold at Aldi — and trust me, we’ve heard it all — Wahlburgers bacon is unquestionably superior to Appleton Farms. 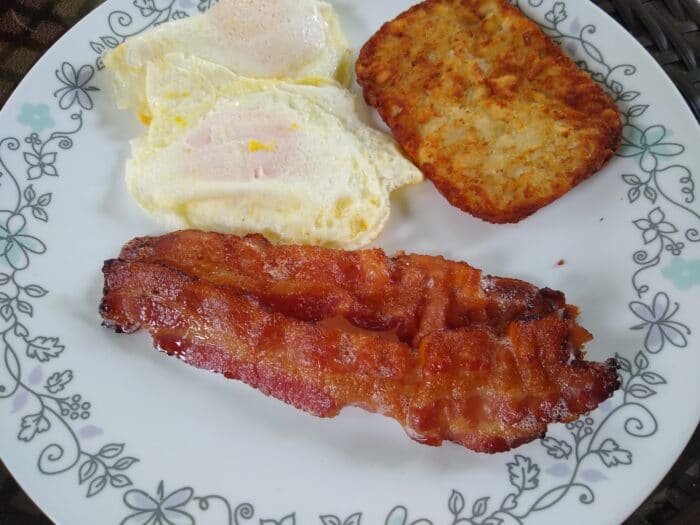 Does that justify the cost? I’d give it a firm maybe. Certainly if you’re looking to impress people, or if you’re a big-time fan of bacon, sure. But if you’re more concerned about the budget, this is more of a sometimes purchase. Since Aldi only sells it occasionally, that’s not a major problem. 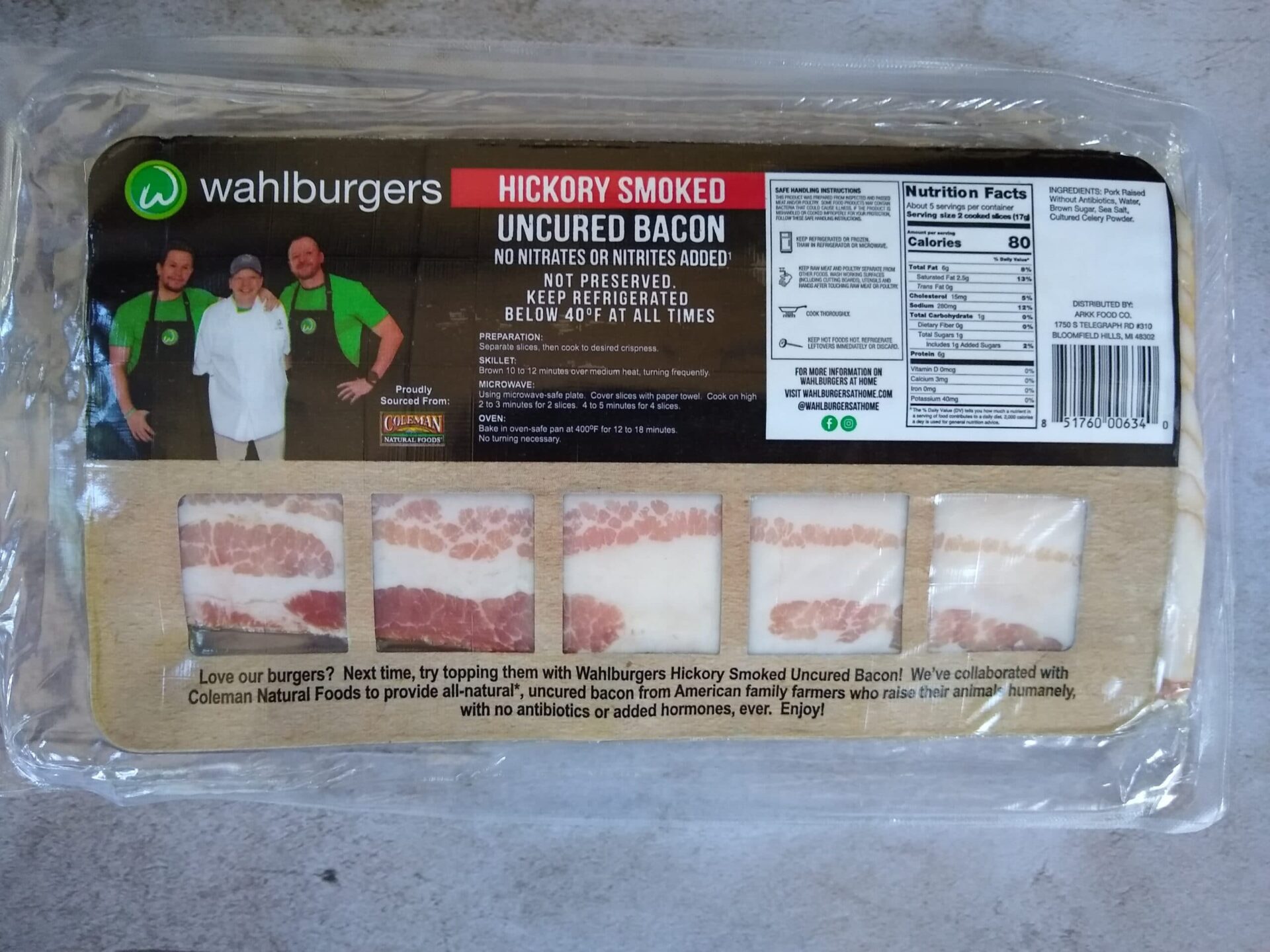 So far, everything we’ve reviewed in the Wahlburgers line has been top-shelf, and this is no different. Wahlburgers bacon is incredible, melt-off-the-mouth good. It’s expensive, but I think it’s worth paying for … at least sometimes. And sometimes is what you’ll get, because this is only in Aldi stores occasionally.