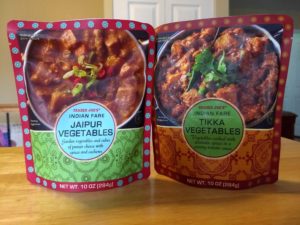 These vegetables are sold in pouches that I found on the room-temperature shelves above the freezer section at Trader Joe’s. At the time of writing, they sold for $1.99 each. Each 10-oz. pouch contains two servings.

These pouches are products of India and look pretty healthy, with mostly recognizable, pronounceable ingredients (see photos of ingredients lists below) such as potatoes, peas, onion, tomatoes, carrots, peppers, and spices. Some of the pouches, however, do contain natural flavors.

Not surprisingly, because these are unrefrigerated shelf-stable products, the veggies have the consistency of canned vegetables, so if mushier vegetables are a no-go for you, you may not like these.

Be sure to get some basmati rice or naan to serve alongside these pouch meals. Both have a lot of sauce, especially the Jaipur Vegetables, so you’ll want something to soak or sop it up with.

The veggie pouches can be prepared in two ways: microwave or stove top.

To prepare in a (1200-watt) microwave, cut a two-inch slit in a corner of the pouch to vent. Stand the pouch in the microwave and heat on high for 1 minute. Carefully remove and pour into a dish. Serve right away.

To prepare on the stove top, place the sealed pouch in boiling water for 5 minutes. Carefully remove and pour into a dish. Serve right away.

I prepared our pouches in the microwave, but I did not think they were quite hot enough for my liking after just 1 minute in the microwave. I microwaved the food for another 30 seconds after pouring it into a small serving bowl.

Once a pouch is opened, it should be kept refrigerated and consumed within one day. 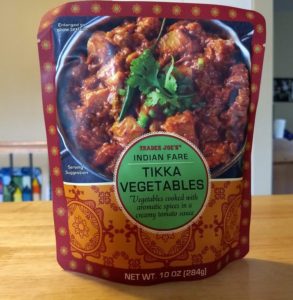 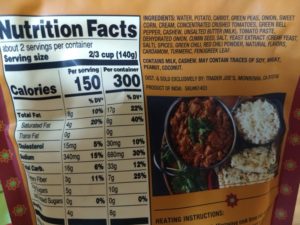 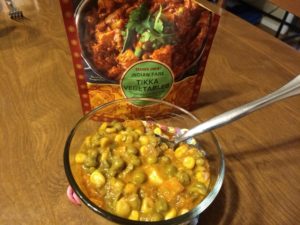 The Tikka Vegetables are described as “vegetables cooked with aromatic spices in a creamy tomato sauce.”

This was my least favorite of the two Indian Fare vegetable pouches we tried. It needed a little more salt, or something. It wasn’t as flavorful as I hoped, although it does have a lot more veggies than the Jaipur Vegetables pouch. It was not bad, but it wasn’t memorable either, and I won’t be buying this one again. If you want a good Tikka Masala sauce to serve with meat or veggies, I recommend sticking with Aldi’s Journey to India Tikka Masala sold in a glass jar. 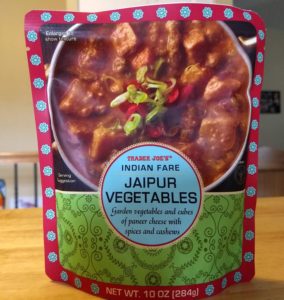 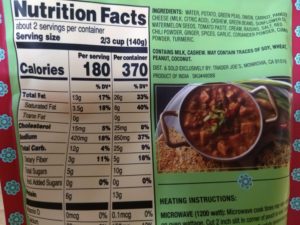 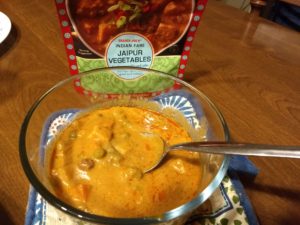 The Jaipur Vegetables are described as “garden vegetables and cubes of paneer cheese with spices and cashews.”

I thought this was good, but it was not the best Indian food I’ve gotten from a grocery store. The seasoning is on the mild side in terms of flavor, but my husband and I felt like this vegetable pouch had much more flavor than the Tikka Vegetables pouch. Also, if you don’t like a lot of heat, this is not very spicy. There wasn’t a lot of cheese in the pouch I got; when I saw chunks that I assumed were cheese, they turned out to be potatoes or carrots. The cashews also are soft because they’ve been soaking in the sauce, but that is to be expected in a meal pouch like this. I liked it enough that I did buy it again. When paired with rice and/or naan, it makes a good lunch for one or two people. 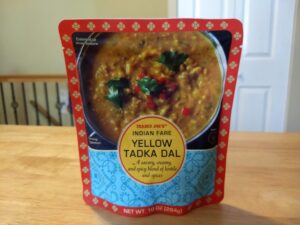 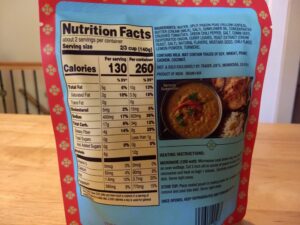 The Yellow Tadka Dal is described as “a savory, creamy, and spicy blend of lentils and spices.”

For people with allergies, this meal contains milk and may contain traces of soy, wheat, peanut, cashew, and coconut.

I liked this meal, and it’s exactly as described with lots of lentils and a mix of spices in a sauce. It’s not spicy, and it goes well with rice and naan and makes a good lunch.